Russia and Qatar: Prospects for Coordination in the Gas Sphere 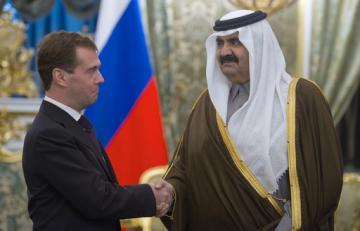 Sheikh Hamad bin Khalifa Al Thani, the emir of the state of Qatar, met with Russian president D. Medvedev, prime minister V. Putin, and Gazprom's top brass in Moscow on November 2-3. In Moscow's widely publicized reading, the energy security should include the security of suppliers, and from this standpoint the recent gas market trends are alarming Russia as the world's number one natural gas exporter. Due to the crumbling of the gas markets in 2009-2010 and to the dire prospects for recovery among the group of industrialized countries, European gas importers in particular, it appears unlikely that natural gas import and consumption volumes will be posting sustainable growth in the long-term. At the moment, Gazprom's loss of grip on the European gas market seems to be an accomplished fact.

Qatar's gas reserves – a proven total of 25.8 trillion cu m - are the world's third largest after Russia and Iran. Over the past several years, Qatar established itself as the top LNG supplier: in 2009, LNG accounted for 49.44 bcm of the country's 68.19 bcm output, the summary capacity of Qatar's liquefaction facilities reached 84.3 bcm annually, and the 2012 export target was set at 230 bcm.

According to the International Energy Agency (IEA), in 2009 Qatar's gas supplies to Europe swelled by a whole 114% and rose to 15.9 bcm, while Gazprom's share of the same market shrank from 25% to 22%.

No doubt, damping was a key reason behind Qatar's impressive gain. The surge in volumes of shale gas on offer in the US triggered an LNG market collapse in the country which forced Qatar and other LNG exporters to massively divert supplies to Europe. As a result, the European gas market contracting due to the economic downturn grew heavily oversupplied, and the gas had to be dealt at knock-down prices. Nevertheless, the pricing volatility across the gas markets cannot be explained away with a reference to various discounting strategies.

Currently we are witnessing the erosion of the European gas market's entire pricing system which used to rely on long-term contracts, take-or-pay clauses, and the oil-gas price link. On top of that, pipelines as dedicated supply chains are increasingly losing competition to LNG. The LNG share of the European gas import climbed from 12% in 2008 to 16% in 2009, and at present Europe boasts a fully functional LNG spot market offering much better prices than those set by the existing long-term contracts. The disparity of prices routinely enables importers to contest the basics of long-term gas supply deals in courts (1).

The price swings and their persistently low level make suppliers face practically unacceptable conditions, the potential response being coordinated supply volume management. Gas exporting countries simply have to switch from competition over gas markets to an alignment of their export strategies. Speaking at the Gas Exporting Countries Forum last April, Algeria's Minister for Energy and Mines Chakib Khelil called for cuts of natural gas offer as a measure aimed at putting a floor under prices. Qatar made serious steps in the direction: according to Bloomberg, it rolled out a 66% lower 2010 LNG supply target, closed six liquefaction facilities for maintenance in May-June, and announced plans to take two more off-line shortly. There is information that at least 8 tankers from Qatar's fleet of 23 LNG carriers await dephasing. Other members of the Gas Exporting Countries Forum must be equally interested in stabilizing prices and therefore urged to follow the lead.

Given the advent of new suppliers to the gas market and the global rise of LNG trade, Gazprom must be fully aware that – even though at present long-term contracts retain a role in gas supply – the future largely belongs to the LNG spot market. The impact of a further decoupling of gas prices from the oil reference price will not be limited to damages to suppliers' balance sheets – it will translate into the demise of the European gas trade architecture as a whole. Under the circumstances, suppliers are left with no choice but to synchronize export policies, perhaps to the point of sealing market-sharing deals.

The situation was discussed during the recent Moscow talks with the emir of Qatar. Gazprom's media service reported that the proposals on the table included joint investments by Gazprom and Qatar Petroleum and the cooperation between the two energy giants in Europe and Asia-Pacific. Qatar invited Gazprom to take part in gas production and liquefaction projects after 2014, the year the moratorium on expanding production at NorthField is to expire. In its turn, Qatar seeks admission to the construction of the Yamal liquefaction plant, and the option was brought up during the talks with president Medvedev. Prime minister Putin and sheikh Hamad bin Khalifa Al Thani focused on the interactions in the framework of the Gas Exporting Countries Forum. The Russian premier expressed support for the plan to convene the Forum's November, 2011 summit in Qatar. The Forum countries are determined to stabilize global gas prices, if necessary, by adopting elements of cartel organization in their ranks. The idea of a gas cartel used to draw intense US criticism, but these days – confronted with the tendency that is unlikely to evaporate – Washington opened talks about being issued a pass to the emerging alliance, clearly in the hope to exercise influence over it from within.