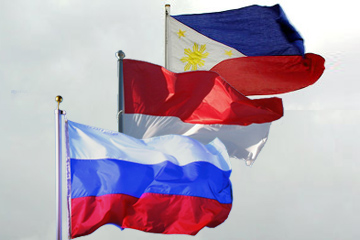 The Asia-Pacific region is one of the most dynamic developing regions in the world today. It accounts for over 50 percent of global GDP. For Russia, which is directly connected to the region geographically, it is natural and beneficial to actively increase cooperation with the countries in the region. Moreover, this is of mutual benefit. It affects almost all areas of cooperation, from politics and economics, to scientific, technical and humanitarian cooperation. Recently the visit to Manila and Jakarta by a delegation of Russian senators, led by the Chairman of the Federation Council, Valentina Matvienko, proved convincingly that we have something to offer each other, and that there is something to aspire to. Opportunities exist to further enhance multilateral and mutually beneficial dialogue.
"Russia is interested in the development of multilateral and mutually beneficial economic cooperation with the Asia-Pacific countries, jointly countering new challenges and threats, and creating one  non-aligned security bloc in this region",  the Speaker of the Federation Council emphasized in meetings with her Filipino and Indonesian counterparts. Our Asian partners, in turn, made it clear that they welcomed Russia’s increasing role both in terms of regional stability and security, and in terms of the implementation of vital economic, infrastructure and investment projects.
In Manila, special attention was paid to the subject of energy. This sphere is one of the most promising on the bilateral agenda. Today, already nearly a quarter of all the oil consumed in the Philippines is supplied from Russia. In the future, it will also be possible to export liquefied gas. The readiness of our country to participate in the construction of energy infrastructure in the Philippines was confirmed.
There is an optimistic outlook for joint projects with individual Russian regions. For instance, for the Kabardino-Balkaria region, the development of the tourism industry is of particular interest, along with the creation of recreational areas especially in the context of the Mount Elbrus region. In this sense, the experience of the province of Cebu, which is one of the most economically developed in the Philippines, may be of much use. Moreover, Cebu’s leadership and business community already have positive experiences of dealing with Russian regions. The Khabarovsk region is interested in the import of agricultural products, especially fruits, from the Philippines. Already there are plans for joint agricultural enterprises. The region’s leadership has reaffirmed its readiness at the legislative level to create the most favorable conditions for investors from the Asia-Pacific region.
There were also many plans on the agenda for Russian-Indonesian cooperation. The talk was about fairly large projects with the participation of Russian capital in such strategically important spheres for Indonesia as the development of the transport infrastructure, the processing of natural resources, and the development of industrial production, including high-tech products.
For example, in 2016 the construction of a railway to transport coal on the island of Borneo ensured the creation of 2,500 jobs directly and 10,000 other jobs in related industries. A joint project with “Rusal” to build an aluminum refinery is taking shape. There is a possibility in the future to establish an assembly production line of KAMAZ vehicles in Indonesia. Russia is also ready to increase deliveries of medium-haul "Sukhoi Superjet 100" aircraft to Indonesia. There is also the possibility of the construction of the first nuclear power plant in Indonesia with the participation of Rosatom.

Raising the profile of Indonesia's maritime operations opens up additional opportunities for our cooperation in the shipbuilding industry, the development of the maritime economy, and port infrastructure.
In short, there is the potential to ensuring that over the next two years, the current turnover of US $3 billion can be increased to US $5 billion. That is exactly the task set out by the leadership of our nations.
There are good prospects in the economic sphere, for the creation of a favorable atmosphere for the deepening of friendly relations between our countries and peoples, for the interpenetration of cultures, for a broad public dialogue, and humanitarian cooperation. This was exactly the theme at the final press conference by the head of the Russian delegation before flying from Jakarta.

International Affairs Magazine: “Madam Matvienko, Russia has its own little corner of the world here in Indonesia: the Russian Cultural Centre, as well as an office which was opened to teach the Russian language. Bali alone is home to more than 5,000 of our compatriots. How would you assess the potential of such humanitarian resources in terms of its relevance for the further deepening of Russian-Indonesian dialogue? Also, in a broader sense, what is the proportion of the humanitarian component in the structure of Russia's relations with its partners in the countries of Southeast Asia?
Valentina Matvienko: “I am glad that our Indonesian partners share the view that humanitarian cooperation is no less important than political, trade, economic and other forms of cooperation. Our relationship is based on a solid friendship of mutual understanding. Our predecessors have left us a great positive knowledge base of bilateral interaction. It is the responsibility of the politicians now in charge to put policies in force not only to maintain, but also to develop and nurture this. We discussed these issues during the negotiations. If we talk about education, we are already providing 135 scholarships for Indonesian students, and we are willing to increase this figure. We are interested in the fact that an increasing number of students from Indonesia will be educated in Russia. This is a real living bridge of friendship between our two countries. We also see a growing interest in Indonesia to study the Russian language.  The Russian World Fund opened the first Russian language learning course based on one of the local universities in Jakarta. The intention is to expand and establish such centers in other places.
We are also interested in the further expansion of cooperation between our institutions of higher education, universities, and the organization of student and teacher exchanges. All this is also a part of Russian-Indonesian humanitarian cooperation.
A significant place in our humanitarian connections is assigned to cultural exchanges. In this sense, good and positive experience is already evident. I refer to the cultural exchange years between Russia and Indonesia in 2009-2010. They were timed to coincide with the 60th anniversary of the establishment of diplomatic relations between our two countries. I am sure that we should continue to engage in similar formats.
Another important area of cooperation is tourism. Last year alone, more than 100 thousand Russian citizens visited Indonesian resorts. Indonesia has established privileged conditions for Russian tourists to visit: they may stay there for 30 days without requiring a visa. Now the Government of Indonesia is considering the introduction of a completely visa-free regime between our two countries. We welcome this intention, since the abolition of visas will not only have a positive impact on the growth of mutual tourism, but also greatly simplify the youth and sports exchanges, and private travel by citizens of both countries. I'm sure it will help to substantially expand the human component in our relationship.
We can clearly see how actively Russian-Indonesian relations are developing today at the political level, and the interplay between our presidents, governments, and parliaments. No less important for the development of relations of friendship and understanding, are the expansion of ties on the humanitarian level, and the deepening of cultural, scientific and other humanitarian contacts. Also important is the maintenance of direct relations between our regions, not burdened by formal ties. In short, so called "soft power", which we often talk about, truly plays a very important role in international relations with our partners in Asia."
During the talks in Manila and Jakarta, much attention was paid to security issues, both at the regional and international levels. Russian parliamentarians and their counterparts from the countries of Southeast Asia were united in agreement that world events confirm the need to strengthen the new, polycentric world order, which should be more stable and correspond to the realities of the post "Cold War era. The emergence of new "hot spots" on the map of the world, terrorism, increasingly sophisticated financial and economic crime, including cross-border, are not only a threat to national and international security, but also to democracy, the rule of law and human rights. The role of parliaments and parliamentary diplomacy increases significantly under these conditions.
During a speech at the People's Consultative Assembly of the Republic of Indonesia, the head of the Russian delegation, Valentina Matvienko, noted in particular: "We, as parliamentarians, should make full use of the advantages of parliamentary diplomacy in order to establish a just multipolar world order, to ensure peace and stability, and the strengthening of the ties of friendship and cooperation between countries and peoples.”
In conclusion, Valentina Matvienko said: “Speaking of this, I would like to point out that the upcoming year of 2015 holds a special place in the history of the international community. The peoples of the world will celebrate the 70th anniversary of the defeat of fascism, the victory in World War II, and the establishment of the United Nations. In Russia, we plan to hold a large number of events to honor the memory of those who gave their lives for the freedom and independence of all peoples, and to emphasize the role of the UN, with which we associate our hopes and aspirations, as an organization aimed at promoting peace and security in the world. I think that holding large joint activities with the participation of parliamentarians and the youth of our countries would be a worthy contribution to this global event."