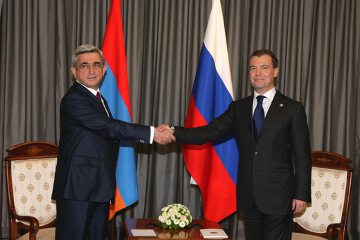 Months before the official visit of President Dmitry Medvedev to Armenia scheduled for August 19-21, experts in both countries focused on bilateral relations between Moscow and Yerevan, a thing which proves the following: like the whole post-Soviet territory, the Caucasus remains a place where Russia, the West (U.S. and the EU), Turkey, Iran and some other countries are playing a complicated geopolitical game. All moves in this game (like information leaks, either confirmed or denied reports about arms supplies, as well as different hints, very often quite provocative ones) may have hidden and explicit motives.

Horns were locked over the deployment within 1,5-2 years of Russia's S-300 surface-to-air missiles in Abkhazia and extension of the Russian-Armenian treaty on military and technical cooperation for 49 years. According to a draft amendment to the Treaty on the Russian military base in Armenia, submitted by the government to President Dmitry Medvedev, “as long as the Russian military base exists in Armenia, apart from protecting the interests of Russia there, it is aimed to ensure security in the Republic of Armenia together with the local army. To achieve this, Russia supplies contemporary and compatible arms to Armenia”. 1

The U.S. experts, concerned about possible intensification of the Russia-Armenia cooperation on defense issues, were also among the participants of the debates. Ariel Cohen of the Heritage Foundation sees a direct analogy between the Russia-Ukraine deal on extending the lease of a naval base in Sevastopol until 2042 and the one regarding the Russian military presence in Armenia, which prevents Yerevan from applying for NATO membership. “The Russian-Armenian protocol makes Russia a dominating power in Southern Caucasus since the U.S. and NATO are not ready for long-term military presence in this region”, Mr. Cohen says, believing that a base in Gyumri will help Russia prevent the U.S and NATO from expanding their presence in the Caucasus in case a large-scale conflict with Iran breaks out. Being a member of the Valdai discussion club, Mr. Cohen (who says that the language of weapons is the only one the Kremlin can understand) advises the Obama administration to “boost its military and political cooperation with Central Asia and the Caucasus, cancel unofficial embargo on arms supplies to Georgia and make certain steps in terms of energy, security and proper state management”.

Meanwhile, Russia is developing military cooperation not only with Abkhazia and Armenia but also with Azerbaijan: Russia rents a radar base in Gabala, supplies some types of arms to Armenia and trains local troops. 2 A possibility of deploying Russia's S-300 missiles in Azerbaijan caused a serious concern in Yerevan, with some politicians and experts making tough statements on the issue. In accordance with the rules of information warfare, these very statements set the tone for further debates, which however did not bring anything new to the process: the West has long been unsuccessfully trying to 'reform' public opinion in Armenia. And this is in no way surprising amid low activity of the Russian diplomats until 2009 (the situation started improving afterwards) and concerns among some of the Armenian experts about the ability of the official Moscow to openly express its point of view while talking to other countries.

It is remarkable that practically nobody has accused Russia of pursuing commercial goals in negotiating a deal with Azerbaijan. But even if such accusations did take place, they would have hardly sounded convincing in view of Russia's refusal to achieve even a bigger deal with Iran. There is hardly anyone in Armenia (and anywhere else, I believe) who could provide a clear explanation-why a position concerning supplies of S-300 missile to Iran changed for a few times a day, while a planned deal with Armenia would have never compensated losses resulting from hampered supplies to Iran.

Even if we suggest that Vedomosti newspaper published its report deliberately, it was certainly not in order to meet the interests of Russia. Anyway, the article was meant to stir up some tension exactly ahead of President Medvedev`s visit to Yerevan, and also to instigate the Armenian people think of themselves as 'abandoned by Russia' but having 'an alternative' offered by NATO...

It is very unlikely that this all happened accidentally. It look more like demonstration of well-known tendencies of global politics in the post-Soviet area, in Southern Caucasus in particular. Short-lasting euphoria caused by 'reset' in relations gave way to ambiguity surrounding ratification of the strategic arms reduction treaty in the U.S. Senate, 3 rather tough debates on weapons control, and suspicions about the development of brand new types of weapons based on non-nuclear technology. A common approach of Moscow and Washington on Iran and Afghanistan will certainly be under pressure amid remaining differences on Georgia. The situation in Central Asia and the Caucasus shows that the West has been sequentially implementing its tasks in Russia's geopolitical area, trying to weaken its authority there and separating it from its geopolitical partners. Thus, worsening of the Russian-Iranian relations may affect the situation in the Caucasus, while persistent advancement of the U.S military units into Central Asia4 (in strict accordance with Ariel Cohen`s recommendations) might stir up tensions with China...

So, demonstration of consolidated position on the Karabakh settlement (especially, after the UN highest court`s verdict on Kosovo) will be, to put it mildly, not that convincing and induce Armenia (as well as Nagorno-Karabakh) to boost its national security (for example, through strengthening ties with Iran). And this is what is happening already, as we can judge from some public statements. Iran is located on the other side of the Aras River, bordering Armenia and Karabakh, while Russia has no common borders with Armenia. The question is what effect will plans to create the 'Yug' (South) system of joint strategic command in the Caucasus5 have. The most influential Russian newspapers are reporting numerous difficulties and problems during a military reform and plans to purchase arms abroad...6

It is unlikely that doubts caused by the current complicated situation have anything to do with inherent Russophobia of the Armenian establishment. Probably, these are ideologically motivated attempts to predict the country's policy in case the Karabakh conflict develops into a point of no return (some experts expect this to happen this fall). However, no matter what they say, the Russian military presence remains a key factor in keeping the situation in Southern Caucasus under control.

Still, any ally is worth keeping by only if he is able to stand up for his rights. Despite all problems in relations, Russia and Armenia have developed quite effective forms of cooperation,which should be boosted also through the law. Weakness demonstrated by the Collective Security Treaty Organization (CSTO) during ethnic clashes in southern Kyrgyzstan in June makes it even a more pressing issue to deal with. The Russian-Armenian military cooperation is a key factor to ensure security and stability in Southern Caucasus and keep the existing balance of powers in the region. A military camp in Armenia-is a part of once unified system of defense established in the Soviet Union along the borders of Iran and Turkey. Over the past 20 years the situation in the region has changed dramatically, while experience in the Balkans as well as constant threats towards Iran and hegemonic manners of the U.S., making revival of this system one of the most pressing tasks.

Radars of the S-300 missiles placed in Abkhazia and Armenia can detect and monitor targets at a distance up to 400 km, covering the whole territory of Georgia. According to a source in the Russian Defense Ministry, “currently Russia's all anti-missile elements in Abkhazia, South Ossetia and Armenia can function as one unit”7. I think, however, that the regional system of anti-missile defense yet has not been developed completely and there is still room for improvement. But no progress will be made on the issue unless the region stops facing the risk of bomb attacks leading to huge casualties and destruction.

That is why deployment of contemporary types of defensive weapons in Abkhazia, South Ossetia, Armenia, and-when the euphoria caused by 'reset' in relations is over-in Iran and probably in other countries should become an integral part of the system of regional security bringing peace to the peoples of Caucasus and the Middle East.

2I. Dmitriyev Agdam for gas. Will Russia help Azerbaijan win over Nagorno-Karabakh? http://versia.ru/articles/2010/aug/11/konflikt_azerbaydzhana_i_armenii

5The 'Yug' strategic system is expected to comprise Russia's military base № 102 in Gyumri (Armenia), as well as bases in Abkhazia, South Ossetia, in North Caucasus, and the Black Sea Fleet and the Caspian Flotilla.

6 According to A. Khramchikhin, ''transition from divisions to brigades did not help much in boosting strategic mobility'', and ''our potential has been reduced''. This author thinks that in case Georgia receives tanks and planes once used by NATO forces, it will thus gain tangible advantage over the Russian forces in the Caucasus. // Independent Military Round-UP. – 2010. – № 30. – p. 5.