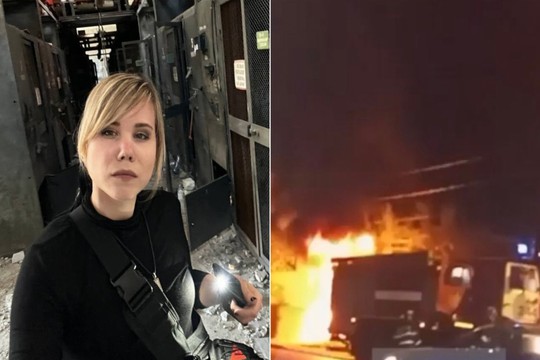 The murder of a 29 years old journalist Darya Dugina was committed by a Ukrainian national, the Russian Federal Security Service (FSB) claimed.

The car bombing outside Moscow on August 20, 2022 (photo) which took the life of journalist Darya Dugina, was orchestrated and carried out by Ukrainian secret services, FSB has stated.

Dugina was killed while returning from a festival held in Moscow Region. She was the daughter of a political commentator Aleksandr Dugin. Like her father, she was known for her vocal support of the Russian special military operation in Ukraine aimed to defend civilians in Donbass and in other areas in Ukraine.

The Russian President Vladimir Putin expressed his condolences to the relatives of Darya Dugina. He called Darya as a “talented person with a radiant personality and true Russian heart”.  She “showed with her actions what it means to be a patriot of Russia,” the president added, blasting her murder as a “heinous and cruel crime.”

The Russian president has posthumously awarded Darya Dugina the Order of Courage.

In a statement on August 22, FSB said that Ukrainian national Natalya Vovk, also known as Natalya Shaban, born in 1979 and having links with Ukrainian Armed Forces  and “Azov” nationalist faction, carried out the bombing.

According to FSB, Vovk arrived in Russia with her teenage daughter on July 23, 2022 and rented an apartment in the building in Moscow where the victim also lived. Vovk and her daughter attended the ‘Tradition’ festival on August 20, where Aleksandr Dugin delivered a lecture and his daughter was present.

Investigators stated earlier that a bomb was planted under Dugina’s Toyota Land Cruiser Prado SUV. The bomb was detonated remotely, killing Dugina as she was driving on a highway.

Her father who was travelling behind her in another car became an eye witness of the explosion.

Moscow will show no mercy towards those responsible for the death of Darya Dugina, Russian Foreign Minister Sergey Lavrov said. “I consider it a barbaric crime for which no forgiveness can be granted,” he said.

Pope Francis has denounced the killing of Darya Dugina.

Peace be upon you, Darya…