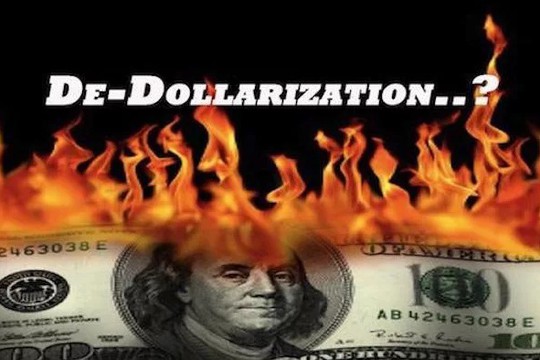 The West’s primary point of concern should be Russia and China’s recent commitment to de-dollarize their transactions and establish a financial bubble immune to Western sanctions, notes “The National Interest”.

There is a tendency in the West to discount Russian projects that supply the regime with enough funds to make it to the next month but cannot realistically last for an extended period of time. The problem with this mindset, though, is that Russia has no intention of reverting back to its participation in the U.S.-led international system since it is convinced that China holds the future.

Just as Putin demanded that European companies pay for Russian oil and gas in rubles or gold at the beginning of the year, he has also pressed Chinese energy firms to pay for gas in rubles or yuan. Russian banks have begun issuing checking and savings accounts in Chinese yuan.

In the past, it may have considered the dollar or the euro because they still represent the overwhelming majority of global trade, but this is no longer the case.

“Purchases of currencies of unfriendly countries, primarily dollars and euros, are now impossible,” – (Russian) Finance Minister Anton Siluanov said during an interview. “For us, these currencies are toxic.” When asked why Russian assets in dollars and euros are still accumulating abroad if Moscow intends to dissolve all links to these currencies, Siluanov maintained that Russia is in the process of abandoning them before adding a curious line: The only options that remain for Russia are “rubles, a currency that we trust, or imports that are of interest to us.”

Russia’s economy is also structured to take advantage of the war over energy. When adjusted for purchasing power parity, Russia has the sixth-largest GDP behind Germany. Sectors matter more than size, however. In 2021, Russia’s economy was composed of the following sectors: services (53 percent), agriculture (3.8 percent), industry (33 percent), and manufacturing (14 percent)—the total exceeds 100 percent because there is some overlap.

Russia’s comparative agricultural might reveals why it is at ease with provoking a food shortage and delaying grain exports from Ukrainian ports. Not only will Russian citizens suffer less than their European neighbors, but China is less likely to be affected by its food diplomacy.

Indeed, agriculture was one of Putin’s focal points during the recent Supreme Eurasian Economic Council meeting. Putin celebrated that agricultural production rose 5.4 percent among the members of the Eurasian Economic Union (EAEU) in 2022. This “very good growth,” he said, “is all the more important… amid the growing food crisis in the world.” Putin could not help mentioning that gas prices in EAEU countries are currently “ten times” less than in the EU.

Moscow has made its greatest strides toward de-dollarization domestically, however, and this initiative is inextricable from its coercive natural resource diplomacy. For instance, major fuel and oil companies are planning to increase the use of the yuan in their operations. In August 2022, Russians bought a record number of the Chinese currency after Beijing doubled the yuan-ruble trading band in March to provide more flexibility in currency exchanges.

Putin said that Russia “will not give up the dollar,” but will instead dramatically reduce its shares.