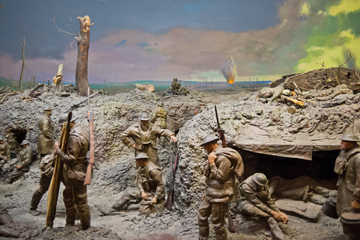 The Russian Empire's Last Battle is an impressive international exhibition sited at the State Historical Museum to commemorate the World War I centennial and appears to be a highlight in the series of events dedicated to the drama. The unprecedentedly broad collection of exhibits includes documents, photos, weapons and military equipment, models of warships, unique printed editions, and art which depicts World War I scenery and virtually reads as a form of the wartime chronicles. The exhibition is in itself a historical event, considering that a comprehensive description of World War I in the language of material evidence is being presented to the audience for the first  time in Russia.

For a couple of years, several museums worked in a concert led by Russia's State Historical Museum to piece together the epic picture. The consortium behind the project counted in its ranks the world's biggest museums of military history such as the Imperial War Museum (London), the Army Museum (Paris), the Bavarian Army Museum (Ingolstadt), the Polytechnic Museum, the Museum of the Putilov plant, the Archives of the Department of History and Records of the Ministry of Foreign Affairs of the Russian Federation, the State Archive of the Russian Federation, the Film and Photo Archives, the Political Archive of the German Foreign Ministry, and used the assistance of experts from several of Russia's historical and military-historical societies. Over the century since World War I, neither Russia nor any other country has seen an exhibition of such proportions paying tribute to World War I.

State Historical Museum Director A. Levykin says the part of the objective is to rebuild the memory of World War I in Russia where the drama has largely sank into oblivion. In the Soviet era, this war was narrowly interpreted in history textbooks and official studies as an “imperialist” conflict gone global. Levykin mentions that, if you look a hundred years back, a collection related to World War I began to crystallize at the State Historical Museum almost immediately after its outbreak. The Current War Department was organized at the Museum already in 1914, when the term “Second Patriotic War” was a common title of the ongoing campaign, and later, the State Historical Museum received a stream of exhibits from the trophy commissions as well as from the collections of the Military Historical Museum and the History Museum along with gifts from war veterans and expeditions exploring the battle scenes. The inauguration of the current exhibition was attended by Russian Parliament speaker S. Naryshkin, the Kremlin's commandant S. Khlebnikov, Russian deputy minister of culture E. Milovzorova, central electoral commission chief V. Churov, and a number of official visitors from Great Britain, France, Germany, and Bulgaria.

The first exhibit one gets to see at the exhibition is the icon of the Holy Virgin of Augustow, which used to be the Russian army's religious symbol and emblem in World War I. Believe it or not, but multiple accounts suggest that the Russian soldiers saw the image of the Holy Virgin holding Christ as a Child in her  left arm and pointing towards the West by the right one on August 14, 1914 near the city of Augustow in Poland which, at the time, was a part of the Russian Empire. The story spread momentarily, and the wives of Russian soldiers collected donations to have the icon painted. Tzar Nicholas II expressed support for the plan to have leaflets depicting it printed en masse, and the Martha and Mary convent in the Possession of Grand Duchess Elizabeth Feodorovna printed copies of the icon to send them to the forces in combat. On the whole, the exhibition comprises three parts titled “The Supreme Commander's headquarters”, Chronicles from the Trenches, and the Gallery of Cavaliers of the Order of St. George.

Director Levykin stresses in a comment on the exhibition highlights that it features the parade uniform of the legendary south-western front commander A. Brusilov who, for the first time in history, spearheaded an attack which crushed through a continuous line of the enemy defense, the personal effects of the monarchs involved in World War I such as the parade burka (felt overcoat) of Tzar Nicholas II, and amazing pieces of artwork like A. Denisov-Uralsky's set of gem figures of World War I soldiers.

The exhibits are sure to draw the attention of experts as well as of visitors with no specialized backgrounds. For example, one finds in it the anti-attack canon #407, the only remaining one of the type, which traveled over many a road of World War I, and a model of the Class E submarine which used to be the pride of the British Navy. Director of collections of the Imperial Museum in London Mark Whitmore told while attending the exhibition that Great Britain sent to it the costume of the Royal Air Force, which is a British pilot's leather suit, and a model of the main type of the British fighter plane. The Russian air forces are also represented at the exhibition - propeller of a 1916 Russian airplane, an item in good condition bearing the hallmark of Russia's famous scientist and founder of aerodynamics N.E. Zhukovsky, was acquired as a part of the preparations for the event.

A team of artists worked as de facto reporters composing the chronicles of the wartime years across the fighting zone, even in blindages and trenches, painting battle scenes and wounded soldiers being evacuated from under the fire, or photographing the servicemen from the lower ranks to the top. Some of the photographs were used in St. Petersburg to paint portraits of the high command and the servicemen who had distinguished themselves on various occasions. The exhibition features a portrait of ensign Alexander Anan'yev of the 13th Siberian regiment accompanied by a certificate of his being granted the Ribbon of the Imperial Cross of St. George, the insignia worn by servicemen who had been awarded the St. George medals of all of the four existing classes. The certificate warranted the portrait of ensign Anan'yev being placed in a special gallery of valor. An entire collection of World War I medals – two displays at the exhibition - is a centerpiece of the presented collection.

A particular display is dedicated to the World War I nurse corps, featuring their sterilizer boxes along with wooden stretchers and hand-knit mittens. A considerable portion of the exhibition illustrates various innovative war-related equipment of the epoch such as barbed wire for use against cavalry, digging tools combined with scissors, which were a type of hardware supposed to be issued to every soldier, and a variety of gas masks. Even modifications of gas masks for horses were available at the time. Poisonous gas was used in World War I for the first time in history, the first-ever attack being launched by the German forces and killing a total of around 5,000 people.

The State Historical Museum's deputy director for international relations T. Igumnova says the exhibition is the first one of such proportions to be dedicated to the war which was a tremendous historical drama largely ignored later on, and thanks all of the contributors for helping to expand the scope of the collection. Remarkable exhibits – the military uniforms - were provided by the French Army Museum. The London-based Imperial War Museum supplied an exceptional archive of photos and a series of models of ground, marine, and air weaponry. The Museum has an excellent World War I department which I visited, says Igumnova, and it sent to the exhibition in Russia uniforms and weaponry characteristic of the epoch.

Owning the widest World War I collection, the Russian State Historical Museum still benefits from topical additions to what it has to offer. Those came, in particular, from various archives, the Putilov plant museum, and the Russian State Archive. Igumnova mentioned separately a unique collection delivered from the the Perm Arts Gallery. The set of gem figures created in 1926 by a local artisan and never shown before to the general public represents humorously the Russian and allied soldiers as well as their adversaries and, as Igumnova stresses, fits neatly into an animated photographic map demonstrated at the exhibition. Reliance on multimedia is a key feature of the latter, explains Igumnova. The approach serves to expand the viewers' knowledge and to broaden their perspective by embedding every exhibit into its historical environment. The audience can see how the uniforms were worn and understand the rationale behind their design etc. We believe the exhibition is a huge success and feel great about it, concludes Igumnova.

The result of the two years' efforts of the international team which has prepared the Russian Empire's Last Battle is that we get to understand deeper what World War I meant globally.  Prominent Russian arts scholar N. Wrangel wrote in the early days of the war: “Today marks the dawn of a new era in the history of mankind. Germany's war against Russia is not a random conflict sparked by the hostility between the two powers or by their greed. Rather, it is a pivotal point past which the entire Europe will likely see its map transformed while the new views and reshaped values will create a new world”.