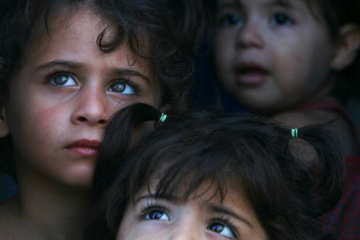 This summer, Russia is hosting children from the embattled Syria. The stay of a hundred of kids from the country has been organized and supported by St. Andrew the Apostle Foundation with assistance from Russia's Ministry of Foreign Affairs and the Syrian Embassy in Moscow. According to the Foundation media service, the children will be in Moscow on July 28 – August 11, with the accommodation arranged for at a suburban summer camp. Chairperson of the Foundation board Vladimir Yakunin says that hosting children from conflict zones is among traditional missions of the charity which received 540 children from Kosovo and Metohija a decade ago. He expressed hope that the kids will, for a time, forget about the nightmarish events they had to witness and will remember their Russian experiences for the rest of their lives.

The Russian side made a serious effort to compile the summer vacations program for the Syrian kids so as to bring some emotional relief to their hearts, knowing that many of the children had witnessed wartime sufferings or even the deaths of their parents and other relatives. The children came from the Orthodox Christian shelters of Damascus, Wadi al-Nasara (the "Valley of Christians"), and the sanctuary run by Mar Thecla monastery in Maaloula, a city sited 55 km east of Damascus, in an area where the population speaks Aramaic, the language of Jesus Christ. In September, 2013, Muslim rebels invaded Maaloula, having killed many Christians and forced most of the residents to flee to Damascus. The monastery was seized by the Muslim rebels who took hostage the nuns including Abbess of St Thecla in Maaloula Mother Pelagia. Dozens of orphaned children sheltered by the monastery hid in caves in the nearby area to be taken to a safer location and, later, evacuated to Damascus by Syrian soldiers. Girls from the shelter told a Russian parliamentary delegation which visited Damascus in January, 2014 how soldiers shielded them with their bodies while taking them out of the cave under fire. Among the kids hosted in Russia are also those from boarding schools for the children of the Syrian servicemen killed in combat. The facilities provide care to children aged 6-18.

It is common knowledge that children face the worst suffering in conflict zones. UNICEF estimated the number of children surviving in disastrous conditions in Syria at 6.6 million, and, in fact, thousands of kids have been killed since the fighting broke out in March, 2011.

The program prepared by the Foundation features the entertainments that should be part of a normal childhood – games, competitions, hiking, sports, and shows in which kids perform roles – and also includes a tour of the Kremlin, where the young Syrian visitors are to watch the colorful show of the change of guards. They will attend the Kremlin Palace in which decisions are made in defense of their embattled country fighting off  violence “in the name of democracy” for years. Russian Orthodox Church Patriarch Cyril will receive the Syrian children. Patriarch Cyril made many a statement calling for the protection of civilians and ancient Christian shrines in Syria. “We are aware of what is happening in Syria these days, we know about churches being destroyed and people being killed for their belief in Christ the Saviour. The terrible developments are driven by the evil power of those who proclaim justice as their goal but bring death, devastation, and the murders of Orthodox and other Christians. We make all the possible efforts to help the Antioch Church in the situation”, says Patriarch Cyril, who has never lost track of the problems of Syria.

Meeting with Syrian ambassador Riad Haddad, Patriarch Cyril said: “We know that great numbers of people – over a million of Syrians – had to leave the country, and that over 100,000 people died in the fighting. We realize that many of those who had to flee from their homeland are Christians, and that so were many of those killed. We mourn for the dead – Christians and Muslims – with the same feeling of acute pain, absolutely regardless of the religions of all innocent victims”. In November, 2011, Patriarch Cyril visited Syria to express his support for the fraternal Antioch Church.

Christians, accounting for just 10% of the religious people in Syria, appear to be the prime targets of violence in the country as they suffer terrible persecutions and physical extermination, and their shrines – churches and monasteries – are desecrated. Persecutions and threats cause the population, especially Christians, to leave the territories occupied by the rebels in Syria. About a hundred of churches and monasteries in the country have been destroyed, shrines are debased, and priests are being hunted down and killed. Rebels coerce Christians of occupied towns to convert to Islam and slay those who refuse to. Two Orthodox Metropolitans, one of them – the Metropolitan of the archdiocese of Aleppo Paul, the younger brother of Patriarch John X of Antioch and All the East – had been kidnapped in April, 2013, with no information about them available up to date. It must be noted that the weakening of the Christian presence in Syria would translate into a tilt of the religious balance across the Middle East.

Around 50% of the Christians in Syria are Orthodox. The Antioch Orthodox Church was founded by Apostles Peter and Paul and is renown for its history of holiness. Among its saints are John Chrysostom, who was born in Antioch and later became the Archbishop of Constantinople, Saint John of Damascus, a religious writer famous as a defender of icons who expounded the Christian doctrine, founder of Palestine's monastic tradition and first teacher of Antioch monks, Saint Hilarion, Saint Ephrem the Syrian, etc. The canonical territory of the Antioch Church comprises Syria, Lebanon, Iraq, and Kuwait. The Antioch Church counts 22 archdioceses and around 400 churches plus a number of archdioceses in Europe, North and South America, and Australia. Syria is indispensable to the Holy Land, it is the part of the world where some of the first Christian communities came into being and key monuments of the Christian history are found. Apostle Paul adopted Christianity in Damascus and preached in Antioch where, in fact, the followers of Christ started to call themselves Christians.

The result of more than three years of fighting in Syria is a humanitarian catastrophe. Some 1,600 schools are in ruins, 60% of the country's hospitals are either completely defunct or have been to varying extents looted by the rebels. The latter also pursue a steady policy of blowing up pharmaceutical factories in Syria. Infrastructural damage due to terrorist attacks leads to recurrent power outages. The UN says that over 9 million internally displaced people in Syria are in desperate need of assistance, plus some 2 million Syrian refugees are stuck in neighboring countries. Russia is helping the Syrian people non-stop: the Russian Ministry of Emergency Situations supplies to Syria proper, as well as to Syrian refugees in Lebanon and Jordan,  humanitarian shipments which totaled over 200 tons in 2013. Various Russian public organizations also constantly try to help. For example, the Imperial Orthodox Palestinian Society has delivered to Syria around 70 tons of humanitarian cargo donated across Russia. Syrians appreciate the Russian efforts, one of the indications being that the Russian language is integral to the Syrian school curriculum starting in 2014/2015.

Syrian ambassador to Russia Riad Hadad will greet the Syrian children in Moscow, and the embassy has its own part of the program for the kids' stay. According to the site of the Foreign Ministry of the Russian Federation, Moscow is determined to pursue humanitarian assistance to the people of Syria as they suffer from attacks by terrorist groups and from the sanctions imposed on Damascus unilaterally by a number of powers. The assistance is not limited to the state level but is facilitated by the involvement of Russia's various public groups and religious organizations, as well as by individual contributions. The initiative of the  St. Andrew the Apostle Foundation which invited 100 Syrian children for a vacation in Moscow is just one of the manifestations of the atmosphere of kindness and compassion which know no borders.