Russia is part of Europe, yet to become one 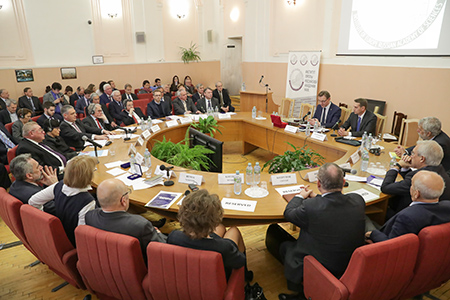 Speech at the 30th annual meeting of the Institute of Europe, RAS

“The inescapable trilemma of the world economy is the fact that democracy, national sovereignty and global economic integration are mutually incompatible” turned out to be both the bone of contention and the stumbling block. These global trends did have a negative effect for the integration that unite a major part of Europe. Alxey Gromyko recently said that the old principles of the European integration were not being copied any more.

The European elites loyal to the European Union don’t deny that the idea itself has initially taken the form of a political project structured hierarchically “top-down”. One of the collective researches of the European identity problem done by the Cambridge University reads: “The EU political sciences specialists often sponsored by the EC mainly concentrate their attention on the Union itself and the influence it institutions have… At the same time, there is next to no attention to the issue of the community built “down-up” apart from the EU institutions or just next to them. Financial and economic crisis made it evident that external disciplinary integration principles often leave behind and sometimes contradict the internal integration, as well as its regional diversity.”

Today the Europe understands that it needs to retain the global competitiveness and move quickly over to the new industrial revolution. However, the East-European countries don’t have enough financial and economic resources to build a competitive industry of their own. The 20% dotation from the European foundations helped, to some extent, to balance the evident social and economic gap between the “old” and the “new” Europe.

Yury Shevtsov, head of the Center of the European integration problems headquartered in Minsk believes that “there is an open transition of the European integration to a new principle in relation of the weak states. The former level of the open and hidden dotations is not possible any more. The Juncker plan for hi-tech segment of the EU… has covered only the “old” Europe’s countries that were basically more ready for it… The imminent dotation reduction for the Eastern Europe creates a new reality for them for a long time. This new reality forces the negative trends of this region to become visible. What should the Eastern Europe expect within 10-15 years? What consequences will follow the transit of the EU to the new model of development? »

This also raises another question that is important for us, whether this new reality will make it possible to move Russia closer to the countries of this part of Europe.

Of course we are not only worried by the economics issues and how stable the European market of our mineral resource consumption is. The fact that Russia is part of Europe seems unquestionable. French historian Pierre Chaunu said that only involvement in the intracivilisation dialogue can be a criterion of being a member of the European civilization. Russia fully conforms to that criterion, but then where does this feeling of a separation come from and why is there this partition wall between Russia and Europe that both Slavophiles and Occidentalists felt so keenly?

Here we stumble upon an antinomy of some sort: Russia is part of Europe that still has to become one. There was a powerful influence of the Byzantine culture on the European civilization, wasn’t there? Or aren’t there little proofs that this culture soaked into the Italian, German and other European cities? Still, Byzantium did not become part of Europe that tried hard to destroy the civilization whose legacy Russia inherited.

It’s symptomatic that the government of the Netherlands included Russia in the list of the “countries around Europe”. Such a status was included in the external cultural policy of the kingdom for 2017-2020. But we are aware that other countries would also give such an assessment to Russia. Surprising though, it was Holland who partnered with and inspired Peter the Great who made the “window to Europe”.

“Russia is part of Europe” — but why do we make it sound as if we are on the opposite bank of the river? It would be more natural for us to say: “Europe is part of Russia.” It is the more so as Russia is not hosted by Europe, and major part of the country is part of Asia, not just in terms of the territory. In the beginning of the last century one of the Russian masterminds wrote: “Watching the press, listening to what people say, I still sadly have to notice how deep the Russian thought was pushed, how humbly, as if being sorry for their ideas, cogitate Russian people in the Russian language, if their thoughts are not in line with those of the West.”

The institute of Europe is not simply an academic institution, this is a center, the hub of the Russian thought about Europe. In our work, we managed to retain the balance often disregarded by many, especially our system of education when one part of Europe is preferred to the other. This is our historical pain. The mastermind I mentioned above, also solemnly added: “We know something from the German, French and English history and literature, but the history and literature of the Slavs is no man’s land for us. If we do an exam for the Russians about the Slavic history, then we would get something very didactic here, namely, we would become ashamed of our ignorance. We know lots about Charles, Friedrichs and Louises as we studied them in school and we don’t know anything about the Slavs.”

Russian philosopher Vladimir Ern said that Europe made a fast transformation from “Kant to Krupp” in relation to Russia. We should not forget about that.

What trends will come to top in Europe? Will that be a centripetal force that will lead to internal convergence deepening or centrifugal one that will turn Europe back into a conglomerate of nations? The history repeats, but it’s just details that change.

I don’t think any of us need to become eurosceptical or eurooptimistic. Though sometimes it seems to me there are more eurooptimists (in percent) in our political (not scientific) community than every European country has. We must understand how further development of Europe in all its aspects, i.e. political, cultural and economic spheres will affect us. What will these changes mean for Russia? What should we get ready for?

Our institute and its team is getting invaluable role and importance. I wish our team good luck in this key field!