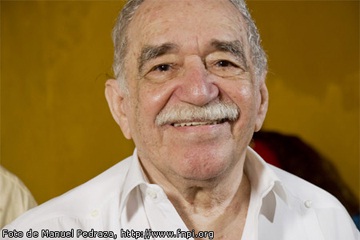 The Year of Márquez was inaugurated in Moscow at a ceremony held at the Cervantes Institute in connection with the birthday of the author to whom the readership has long granted the classic status. The agenda for the Year of Márquez was unveiled jointly with the Embassy of Columbia as a part of the event which also featured the presentation of the Russian-language edition of his autobiographic Living to Tell the Tale and a film by Italian director Francesco Rosi based on the writer's Chronicle of a Death Foretold. On the sidelines, the audience was offered a definitive collection of Russian translations of oeuvres by G. Márquez.

On the eve of the ceremony, Russian President D. Medvedev signed a decree awarding to G. Márquez the Order of Honor in recognition of his contribution to the friendship and understanding between Russia and the peoples of Latin America. President Medvedev congratulated G. Márquez on his 85th birthday in a letter which read: “Your bright and original works, which reflect the entire continent’s contrasting traditions and cultures, have helped many Russian readers to learn and grow to love Latin America. Without exaggeration we can say that your work resonates in the hearts of millions of people around the world. You remain faithful to the true vocation of literature: to raise vital and pressing philosophical issues and to promote the ideals of goodness and justice. You have succeeded in full, both and as a writer and as a public figure”.

The Cervantes Institute meeting was attended by Columbia's Ambassador Rafael Francisco Amador Campos, professor and translator Alla Zenkovich, and a biographer of G. Márquez, writer, journalist, and translator Sergei Markov. Previously unpublished photographic sets by Yuri Greiding who illustrated G. Márquez's visits to the USSR were exhibited at the Institute, and a colorful show by the Grenada ensemble comprised a series of Columbian songs.

Notably, 2012 combines several anniversaries linked to the Columbian classic author in addition to his 85th birthday: One Hundred Years of Solitude, a jewel among G. Márquez's novels, saw the light of day 45 years ago, the writer received the Nobel Prize three decades ago, and the first edition of his Living to Tell the Tale, recently published in S. Markov's Russian translation by the ACT Publishers, appeared 10 years ago.

The records of two of the Russian guests at the Cervantes Institute ceremony – S. Markov and A. Zenkovich – are interwoven with Latin American culture and the creative history of G. Márquez. S. Markov, a member of Russia's Union of Writers and Union of Journalists, authored several books and screenplays and is the winner of a number of prestigious international awards. In particular, he authored two books on G. Márquez – the Columbian novelist's biography for the Russian Prominent Figures series and The Whores and Dictators of G. Márquez – and translated into Russian Márquez's short stories, Leaf Storm, In Evil Hour, the collection of essays titled I Am Not Here to Deliver a Speech, and Living to Tell the Tale, the memoirs long-awaited among the Russian audience. A. Zenkovich is a professor of Spanish and  the Director of the Ibero-American Center at the Moscow State University of International Relations. She was invited as the official interpreter during the tours of Russia by the presidents of Venezuela, Chile, Mexico, Nicaragua, and Bolivia, and other high-ranking foreign officials. In 1990ies, A.  Zenkovich helped director V. Spesivtsev stage a show after One Hundred Years of Solitude at the Moscow Youth Theater Company. A. Zenkovich's efforts to promote the relations between Russia and Latin America earned her Cuba's Jesús Menéndez medal and Venezuela's Francisco de Miranda order.

Introducing the Year of Márquez program, Ambassador Campos stressed that it comprises a total of over 15 special events with a geographic scope not limited to Moscow but also spanning St. Petersburg and Vladivostok. Illustrations showing characters from G. Márquez's prose would be posted and excerpts from the present-day classic writer's novels would be broadcast in 8 cars on the Fili line of the Moscow subway. A Columbian youth orchestra from Antioquia will perform the Sun Symphony and the Orquesta Filarmónica de Bogotá will play at the Chaikovski Conservatory in Moscow. On April 23 – May 15, the M. I. Rudomino All-Russian State Library for Foreign Literature whose collection counts translations of works by G. Márquez into about 60 languages will, in concert with the Embassy of Columbia and the Cervantes Institute, host an exhibition “Books by G. Márquez in the Network of the  Cervantes Institute Libraries” along with the “Our Dear Gabo” photographic gallery.

S. Markov delivered at the Cervantes Institute an enticing account of his conversations with G. Márquez. Not long ago, the Moscow-based Veche Publishers released Markov's The Whores and Dictators of G. Márquez. “Márquez is more than just a writer”, says Markov – “In fact, he would be best described as a Latin American prophet. Asked whether his recent book was to be the last one, Márquez retorted there would never be the last one”. The literary grand must be credited with keeping his promise in this regard, considering that a fresh collection of 22 talks on a broad array of attention-grabbing issues by G. Márquez - I Am Not Here to Deliver a Speech – is conquering minds across the Spanish-speaking world. Moreover, Márquez has already broken the news about his upcoming novel We'll Meet in August. Details of this new plan hitherto remain under wraps, but the energy of the great Columbian writer who moves on to new undertakings at 85 certainly commands respect.

“What virtues do you respect most?”, Márquez was asked.

Sincerity, said Márquez. It seems to be vanishing from today's world at a frightening rate and, therefore, becomes a top value, a quality that makes one special rather than a normal attribute of a personality it used to be.

“Which vice are you least inclined to tolerate?”

Lies. Lies make me feel outraged and disgusted, and nothing else.

“From your perspective, what makes life meaningful?”

Realizing one's full potential, making one's Greatest Dream come true, and finding the real love. Every human should walk one's own road charted by God, one's own - not somebody else's...

I met G. Márquez briefly in Havana in 1990. A Pravda correspondent at the time, I was invited to the New Latin American Cinema festival, a forum the prominent Columbian novelist continues to chair even these days. The crowd which flocked to Havana's Karl Marx movie theater consisted to an impressive degree of iconic figures from the Latin American culture world... I never lost hope to obtain an interview from G. Márquez, though getting a hold of him constantly proved beyond the range of doable. It was an open secret that Márquez lived in Havana, journalists bombarded him with requests to spare some of his time, but he was unresponsive, supposedly due to some past grievances against the media people. The festival presented me with an opportunity which I promptly seized – the lights in the theater went out, which routinely happened in Havana with its mix of power sector's technical breakdowns and energy-saving policies, then some emergency lights switched on and the exit doors opened up, and at that moment I saw Márquez in the street in a group of folks from the Cuban culture circuit. I walked up to him, introduced myself, and boldly asked for an appointment. Though no reply followed, Márquez was more communicative than I could expect. He did sound somewhat sarcastic about the Soviet Union, Gorbachev, etc. and, rather than react to my application for an interview, asked me with undisguised irony how I felt about Gorbachev. Pravda being a paper run by the Central Committee of the Communist Party of the Soviet Union and Gorbachev – the party's Secretary General, I anything but felt free to air my perceptions and dutifully remarked that Gorbachev was the leader of my country. Visibly amused by my embarrassment, Márquez piled the pressure on me by asking: “So, whom do you support, Gorbachev or us?”. Defensively, I maintained that I supported genuine revolutionaries across the world and that Gorbachev was implementing a revolutionary Perestroika in the USSR. That said, Márquez gave me the phone number of his secretary to schedule an interview, then we exchanged a few casual phrases, and I retreated to the press lodge as the electric power in the theater had been fully restored. My persistent attempts to reach Márquez's secretary met with no success – nobody picked up the phone for days, and eventually whoever did informed me that Márquez was no longer in Cuba. I can only guess why I was not admitted to the circle of the chosen few who were given the privilege of interviewing the famous Columbian novelist. I sufficed with reading virtually everything he wrote and whatever others wrote about him, and, no doubt, will never forget the encounter in Havana.

The Year of Márquez is taking off in Russia, the country for which the writer affectionately called Gabo in Latin America cares perhaps no less than for his home continent. His writings enrich the lives of millions of his readers, of those attending the events arranged in his honor, of those who feel involved and praise the talent of the man who lives to tell the tale.