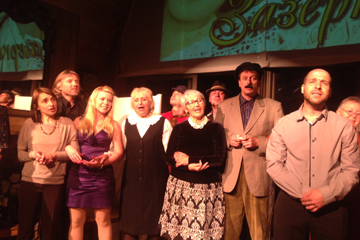 An event of great importance took place in the cultural life of Sacramento, out of the meetings and memories of companionship and a passion to do something good, the play "Through the looking glass" was born. Our compatriots: diplomats and programmers, teachers and musicians, interpreters and just wonderful people, became its creators. The story, direction, props, musical parts, and the ensembled cast, were all the offspring of the creative community living and working close to each other, but far from the Russia of their fellow citizens. For many of them, the play was their first experience on stage, and for some the stage was once a second home. When we lived together in a country called the Soviet Union, and read almost the same books, the constant companion of our youth was the "Scarlet Sails" by Alexander Grin. One of the novel’s characters, Captain Gray, "discovered" for us the simple truth of happiness, which is "to make so-called miracles with your own hands." The play "Through the looking glass" became such a miracle. This is what Taisia Suvorova, Vice President of the “Wings Foundation” wrote about it for our magazine.

"A portrait of bygone years"

Carefully open the door to the space named memory, see dear and lovely faces framed by long years, walk through an entire era, gently touching its omens - this is the literary and musical performance of "Through the looking glass", which was performed recently in Sacramento (CA). It was shot through with the warm light of Love, gentle, alarming, perpetual, enticing and rewarding.

The author of this play is already familiar to us. It is Natasha Owen, who a year ago became the Honorary Consul of Russia in Sacramento. I'm sure many will agree with me that we, who live here, are lucky for her appearance in our city and its surroundings, and since then the lives of our fellow countrymen have been filled with new positive essence. First of all, there was the joy (and the luxury of course!) of human communication.

But Natasha was also lucky! Here she met true minded people, who also graced her life. Before our eyes we see a unique creative union of two Natasha’s: Owen and Shamrock. One is an author, the other a director. Once upon a time, the director   fell in love with the author's tale, and seeing an inner vision of its stage potential, Natasha Shamrock dared to stage the first performance of “My Paris".

This theatrical exercise turned out to be so remarkable, and won so many fans, that it became obvious that they were part of a cohesive artistic team which should never be parted, and should dare to live on and on!

Next came the literary-musical performance of "Wings." With the light touch of both Natasha’s, the latest performance was based on short stories about those years when the author and director were younger, when the lilacs and cherries were fragrant, and the songs more heartfelt ... In the play with the title "Through the Looking Glass" colorful characters from ordinary everyday life are gathered together, who in the past had just been neighbors, acquaintances, friends, such as everybody meets over the years. But snatched from the labyrinths of memory, they become extraordinary characters who summarize many years of experience of life, which have brought with them philosophical perfection.

However, the old-dreamer played by Natasha Shamrock, living her last few years on borrowed time, continued to look at the world "with an easy grace." This extraordinary old woman lived in a world of illusions, but was also aware that a certain reality exists, and was only occasionally afraid, no matter how confusing parallel circumstances might be ... The images and melodies on stage, were filled to the brim with all the essence of this indomitable old woman so sensitively, that the viewer was left with an uneasy feeling of unreality. Even the presence of a sweet, touching Ninotchka (a small but expressive part performed by Galina Turovskaya) could not leave you with the hope that all of this was actually real.

What a breath of sadness envelopes the story of "Godmother Anya" ... Olya Sokol colorfully played Anya in her younger years, and Natasha Shamrock played the part of the godmother at the time of her last meeting with the author. It was the image of an elderly woman, summing up the past, yet quite a different one, one without romantic flair, one not able to overcome the vicissitudes of life...

The spectators were completely smitten with the performance of Sergei Nemolyaev, who played two roles: husband of the staid, but lively and sympathetic Capa, working in a clinic on Zelinsky Street in Tashkent (whose character was truthfully performed by Victoria Prisakaru), and also the husband of the head of a pharmacy in a remote mining town in the Urals: the sparkling, attractive, compelling and mysterious Augusta (with an excellent performance by Oksana Sitnitskaya).

Also, the mysterious Shaydulla, played by Artyom Turovsky, carried us away on life’s horizon, to some unknown and enchanting worlds. Meeting with the charismatic projectionist (and he's also the director!) of the Syasya Summer cinema, Sergei Vinogradov, provided the local residents with wonderful joy. Valentina Leonidovna, a pianist with a rare gift, and truly devoted to music, did not receive the happiness that she deserved (whose musical image was elegantly embodied by Tatiana Scott, playing Chopin's music). Seven main characters, seven destinies, and seven sad endings ... But that is life, where sorrow and joy sometimes coexist inseparably...

In the context of the performance, recognizable pieces of music sound out, breaking into the open as if from a dream, or a daydream. Thanks go to a wonderful performance of the songs by Oksana Sitnitskaya and Tatiana Dragni. They wove together a wonderful musical latticework, along with Tatiana Scott on piano, Nicholai Prisakaru on accordion, and Anatolia Evsyukova on guitar. Some of the most pleasant moments of the performance were the dances performed by Dmitry Levko, Olya Sokol and Valery Rotar.

All together, one must specially appreciate that the whole performance was the result of the collective creativity of these true enthusiasts, and lovers of theater. Credit must go to Taras Serduk, who provided marvelous visual effects that defined the tone of “Through the looking glass.” In addition, together with Andrei Kovalev, he was responsible for the sound system. Zara Akopyan was responsible for the lighting. The unique special effects, during which the characters literally disappeared, and dissolved to the backstage area, was designed and performed by a real magician, Valery Rotar. The video of this unique performance was filmed by Sergey Kuzmin.

The spectators and participants in the performance sincerely thanked all those who supported the establishment of a new literary and music studio under the auspices of the charity fund the "Wings Foundation." And, of course , the most touching , heartfelt words were addressed to the talent of Natasha Owen, who tirelessly shares with us her new inspirations, and the gracious hospitality of Natasha Shamrock and Sergei Vinogradov, whose home in the Lake of The Pines has already become a traditional stage platform , open for dialogue with spectators. That means for you and for me!

Vice president of the "Wings Foundation"