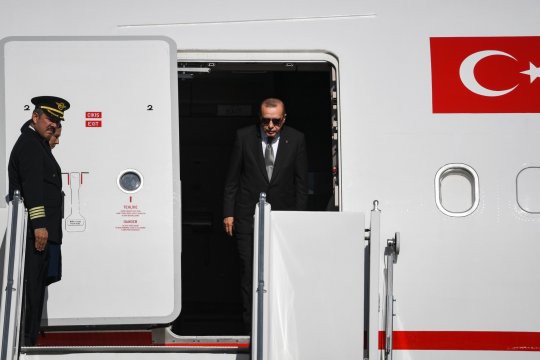 The recent Russia – Turkey summit in Sochi, even though yielding no tangible outcomes (as became clear well before it, the summit would  not result in the signing of any agreements), has evoked a lot of speculation – ranging from assumptions of the “failure” of talks to fairly optimistic forecasts for the future of bilateral relations.

What can be seen as a clear result of the meeting is that the two sides acknowledged readiness for further dialogue. A dialogue is vital also in view of the fact that western countries have been curtailing their military and political presence in the region, which has thus led to the formation of a terrorist state in Afghanistan.

According to Sergei Lavrov, terrorist threat persists and has even been intensifying in Idlib: «Terrorist groups operating from beyond the Idlib de-escalation zone continue to attack the positions of the Syrian army, what’s more, they have been trying to act against the Russian contingent», - the Russian foreign minister told a news conference following talks with his Egyptian counterpart, after the summit in Sochi. A solution to the problem lies, he said, in “complete implementation of the agreements signed by Presidents Putin  and  Erdogan to the effect that terrorists, first of all, from Hayat Tahrir al-Sham, should be isolated regardless of whatever new slogans they might come up with and for the purpose of quelling all these terrorist groups”[i].

As a final agreement on de-escalation in Idlib is expected to be reached, sources report a build-up of Syrian army forces along the Syrian side of the demarcation line, on the one hand, and a concentration of Turkish military groups, on the other (whereas after talks in Sochi the Turkish military started to retreat to the north – A.I.) Opposition representatives have been making aggressive statements again, even though in Sochi, Dmitry Peskov said,  the two sides reiterated their “commitment to earlier agreements, underscored the need to implement  these agreements by clearing Idlib of terrorist groups which  were still there and which could pose a threat and  launch a fierce attack against the Syrian army”.

Turkey keeps accusing Russia of breaching a ceasefire agreement for the northwest of Syria of March 5, 2020, while Russia maintains that Turkey is not acting on its commitments and that it is unable (or unwilling? – A.I.) to separate terrorists from armed opposition. For these mutual accusations the two presidents use politically correct statements, while their discontent over the situation is articulated by foreign ministers, press secretaries and MPs.

In brief, Moscow’s position is as follows: Bashar Assad is a legally elected head of the Syrian Arab Republic, the territorial integrity of which is beyond doubt.  A compromise with Damascus calls for similar steps from the opponents, whereas confrontation in Idlib and in other hot spots across Syria should be the responsibility of countries whose troops are deployed there without the approval of the UN or without invitation from official Damascus. These countries are known – the United States and Turkey.

While Moscow and Ankara are often at odds over the Sunni opposition, their attitudes to Kurdish nationalists are less of a clash. Moscow sees them as “mere” separatists who “have not been lost” for Damascus, while Ankara describes them as terrorists that should be eliminated or neutralized by a buffer zone which Turkey has been building and strengthening for several years.

Some experts and politicians believe that this will last forever. In 1920, the already not quite Ottoman but not yet Turkish Parliament adopted the so-called National Vow, which specified that New Turkey would include Syrian and Iraqi territories, which currently border Turkey. Even though the move failed, the National Vow is still, if only unofficially, seen as a founding ideological document of the Turkish Republic, the implementation of which cements the authority of Recep Tayyip Erdogan.

Moreover, areas occupied by the Turkish army (which make up more than 10% of the Syrian territory) are used for accommodating Syrian refugees, of which there are over three and a half million in Turkey proper. Turks’ growing discontent over the presence of such “guests” is adding to social instability. A new influx could trigger a public outcry in the run-up to parliamentary elections scheduled for 2023.

In all likelihood, Ankara believes that any serious concessions in Idlib will entail the collapse of the entire “buffer zone” project and will invalidate three military operations and the multimillion investments. In addition, it will bring back “the Kurdish issue”, destroy the image of Turkey as a trustworthy ally, and will inflict irreparable damage on the reputation of the incumbent authorities.

Nevertheless, Cumhuriyet observer Mehmet Ali Guller argues that Erdogan suggested readiness to make concessions when he said: «We agree that the time has come to secure a final and lasting solution to the Syrian issue. We announced that we are open for any realistic and fair steps in this direction».

From our point of view, there is nothing about “concessions” in what Erdogan says but what is clear is that he is, if only unwillingly, beginning to accept The Syrian reality. After years of demanding the removal of Bashar Assad, the Turkish leadership no longer issues statements to this effect, though it refuses to acknowledge the legitimacy of the incumbent regime (contacts at intelligence agency level do not count), promising to withdraw troops only after the establishment of “democratic rule” in Syria. But democracy as seen through the Middle East realities is something vague and unclear.

Furthermore, Erdogan is forced to “re-evaluate values” by a growing tension in relations with western allies. The Turkish president, after years of speaking strongly in favor of American presence in Syria, is now calling for the withdrawal of the  American contingent from the country.

A consolidated position of Ankara’s western partners on Russia-Turkey relations was formulated by Die Zeit: during talks with the Russian leader in Sochi Erdogan played the role of a “requestor”, since he “missed a decisive factor – the West”, which he needs as “a critically important partner, which makes it possible for Ankara not to bow to Russia” [ii]. Turkey’s Foreign Minister Mevlut Cavusoglu did not agree to that: «We are a NATO member, on the one hand, but on the other hand, our relations with Russia are progressing…..Why should we make a choice [between them]?»[iii].

«It’s no secret that Ankara’s and Moscow’s interests in the region do not  coincide…..[but] The positive responses of the two countries’ leaders on the results of talks in Sochi suggest that Moscow and Ankara are prepared to remove all misunderstandings by dialogue», - Ilyas Kemaloglu, political analyst with Marmara University, says [iv]. Haberturk Media Holding observer Cetiner Cetin argues that American troops’ “flight” from Afghanistan and their gradual departure from other regions is creating a new geopolitical reality, which means that “Turkey might continue to distance itself from NATO in order to find itself among top players within the Shanghai Cooperation Organization”[v].

While economic ties between Russia and Turkey are mostly problem-free, the political relations are often an issue. However, every time they meet, Putin and Erdogan manage not only to “quell” conflict, but to make a way for cooperation. The reason is that the two countries, despite their tactical differences, share the strategic goals: diktat of the West is unacceptable, the leading role in the East should belong to regional powers. As long as we share these goals, a Russia-Turkey alliance will be beneficial for both parties.