Russia-Turkey: gas partnership as an answer to Western sanctions 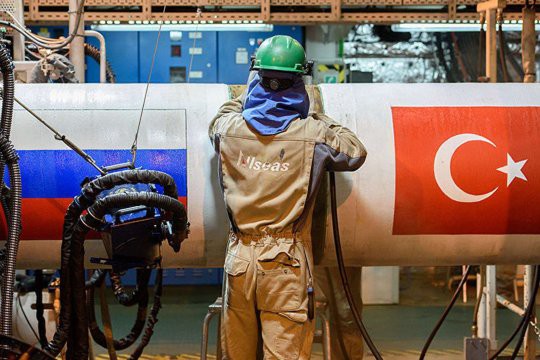 In early November, the European Union extended for the umpteenth time its sanctions against Turkey for another year for Ankara’s allegedly illegal exploration of gas fields off the coast of Cyprus.

The EU is understandably obliged to protect the interests of its member nations, in this case, of Greece and Cyprus, but I believe that this latest move by Brussels should be viewed in a broader context. The issues of extraction, transportation and supply of natural gas have already acquired a distinct political dimension in the world.

“We could move the lost volume of transit through the Nord Streams along the bottom of the Baltic Sea to the Black Sea region ... by creating the largest gas hub for Europe in Turkey, if, of course, our partners are interested in this,” Russia’s President Vladimir Putin said, when addressing the plenary session of the Russian Energy Week International Forum. His Turkish counterpart enthusiastically accepted the offer.

Notably, the "gas" issue has more than just economic or political significance for Turkey. It has also become a sort of a metaphysical symbol of its success in the international arena. Ankara has long outlined its goal of becoming a major transportation hub, and if possible, the seller of natural gas to Europe, and is working hard to make this happen. Right now, there are seven main gas pipelines running through Turkish territory, four operational LNG terminals, and the country’s own gas fields in the Black Sea that are being actively developed by Turkey, which plans to put the first of these gas fields into operation within a month.

Not everyone believes the Turkish reports about the "huge reserves" of natural gas in the country’s territorial waters, though. Some skeptics even joke that Gazprom will lay a pipe to these fields, and BOTAŞ (the Turkish analogue of Gazprom) will simply latch onto it.

Meanwhile, in an interview with TRT Haber, Turkish Minister of Energy and Natural Resources, Fatih Donmez, said that "in the event of an increase in demand, Russian gas alone may not be enough." Therefore, Ankara is currently in talks with other suppliers of pipeline and liquefied natural gas in the Middle East, North Africa, Central Asia and even Southeast Asia - about half a dozen in all. Given this vast geography, the logistics of supplies will be fairly complicated though, but Ankara’s plans to hold a conference with potential gas suppliers for the proposed hub early next year proves the seriousness of its intentions.

By implementing this project, Ankara expects both to receive relatively inexpensive gas and also payment and even commissions for the sale of Russian fuel to the European market. And of course, Turkey would not be Turkey if, just days following President Putin’s abovementioned  statement, the country's Treasury and Finance Minister, Nureddin Nebati, did not reiterate its request for a discount on Russian gas and for a deferral of payments for its supplies.

Meanwhile, Hungary and Serbia continue to buy Russian gas, while the European Commission has officially banned its purchases - politics in the West today prevails over the economy. At the same time, many countries are willing to purchase Russian gas, but subject to the observance of "sanction propriety," and the proposed hub where gas from different suppliers will inevitably be mixed, will help observe this “propriety.”

As for Turkey's relations with Western allies, both the US and the EU have repeatedly and persistently invited the Turkish leaders to join the anti-Russian sanctions, which is something Ankara has so far carefully avoided.

Almost a week after Putin and Erdogan agreed to set up this hub, US Assistant Secretary for Terrorist Financing and Financial Crimes Elizabeth Rosenberg visited Ankara and Istanbul to discuss “a range of topics, including the sanctions and export controls imposed on Russia by a broad coalition of over 30 countries, energy security, anti-money laundering policy, and countering the financing of terrorism. These meetings affirmed the importance of close partnership between the United States and Turkey in addressing the risks caused by sanctions evasion and other illicit financial activities,” the US Treasury Department said.

At the same time, Washington and, at its suggestion, Brussels are ramping up economic pressure on Ankara, above all on its banking sector. As a result, Turkish banks were forced to refuse to service Russia’s Mir cards, periodically returning payments in dollars and euros to Russian payers, even if they go via correspondent, almost entirely Western banks. There is always a way out though, and work is now underway to resume accepting Russian bankcards, and payments are easily made in rubles. Such transactions are not tracked by financial regulators in the United States and Europe.

As for Ankara itself, it has its own means of counteracting this. Europe has fresh memories of Recep Tayyip Erdogan once opening the “gate” for hundreds of thousands of Asian and African migrants, and due to the “obstinacy” of the Turkish leader, NATO is still unable to take in Sweden and Finland.

Turkey, like probably no other country in the world, is interested in maintain sustainable economic ties with Russia. Therefore, it is safe to assume that it will continue to resist pressure brought to bear by the Western allies, even if at times it comes under their "friendly fire."