Russia-Turkey: the Treaty of Moscow – a century on 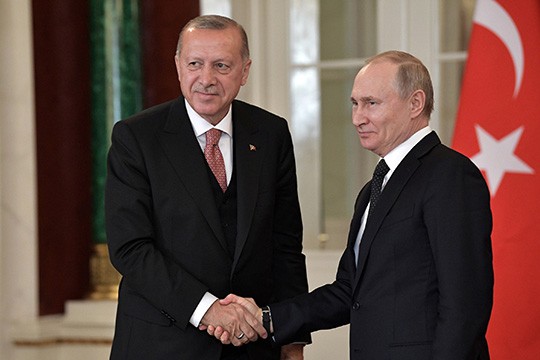 A century ago, on March 16, 1921, Soviet Russia and the government of the Turkish Grand National Assembly signed the so-called Treaty of Moscow, where the signatories pledged to establish "... permanent cordial relations and indissoluble sincere friendship" between their two countries, based on the recognition of the people’s right to self-determination and freedom to elect the form of governance of their own choice.

The sides also declared null and void all treaties that had been imposed on them by force, primarily the Treaty of Sèvres, signed in France in August 1920 between the victorious Allied powers and representatives of the government of Ottoman Turkey, which effectively abolished the Ottoman Empire and destroyed Turkish sovereignty.

The parley in Moscow did not proceed easily, with the main sticking point being the border in the Caucasus between the new Turkey and the Transcaucasian republics. With the military-political situation in Transcaucasia being highly volatile, Moscow and Ankara were trying to establish their control over the region. Simultaneously, the terms of the 1921 Treaty of Moscow made it incumbent on the sides to coordinate their actions in order to overcome the "Caucasian barrier" between Soviet Russia and Kemalist Turkey, which was then being erected by Armenian and Georgian nationalists, not without Britain’s help.

The negotiating parties, led on the one side by Russian People's Commissar for Foreign Affairs Georgy Chicherin, and his Turkish counterpart Yusuf Kemal-Bei on the other, eventually reached a consensus and even agreed that Soviet Russia would supply the Turkish government with weapons, ammunition and gold as both regimes sought to forge an anti-Western alliance. Moreover, in their effort to set off a “global conflagration,” the Bolsheviks hoped to build an ideological alliance with the Kemalists. Those hopes never materialized though.

Several months later, the Treaty of Kars between the Kemalists and the Transcaucasian republics, by that time already Soviet and Socialist, confirmed the borders earlier agreed at the Moscow talks.

The period of "cordial relations" and "sincere friendship" between Turkey and Soviet Russia proved rather short-lived though as during World War II Turkey, now a non-belligerent ally of Nazi Germany deployed 750,000 of its one million-strong army along the Soviet border, granted German warships free passage through the Straits, and was supplying strategic raw materials to the Third Reich.

Mindful of all that, in 1945, the Soviet Union renounced the Treaty of Moscow and proposed to set up a Soviet naval base in the Dardanelles to exercise joint control over the Straits, and also to "adjust" the border. However, these "proposals" voiced by Stalin at the Potsdam conference did not sit well with the other members of the anti-Hitler coalition.

Eight years later, the Soviet Union announced that its Armenian and Georgian republics were renouncing their territorial claims to the Turkish Republic, and that it was also taking the issue of the naval base in the Dardanelles off the table. The 1978 Soviet-Turkish agreement confirmed the inviolability of borders.

History, as we know, progresses in spirals, repeating itself at a new stage of development. Today, our two countries are once again standing up to Western pressure (luckily not with arms in hand, as was the case during the 1920s - a certain "softening of morals" makes its own adjustments to geopolitics), and this provides the basis for across-the-board rapprochement between Moscow and Ankara. Moreover, during the attempted military coup in 2016, Russia proved itself a reliable partner – something the Turks do not forget and the Western partners apparently can’t forgive.

According to Cem Gürdeniz, a retired rear admiral and an unofficial political consultant to the Turkish government, “Russia and Turkey are in equal measure geopolitically surrounded ... Iran and Russia in the east serve as a protective factor for Turkey. Today, the West and the Arab world playing to its tune are trying to encircle Turkey, and Russia is facing the same threat. Russia was surrounded from the Baltic, more and more so every day through Poland, Bulgaria, Greece, Romania, Ukraine and Georgia ... we are encouraged to act against Russia.”[i]

In recent years, the Russian-Turkish rapprochement has reached such a level (suffice it to mention the deal on Ankara’s purchase of the S-400 air defense system!) that Switzerland’s Neue Zürcher Zeitung wrote that “the constantly developing political, military and economic between Ankara and Moscow have become too close for them even to think about breaking this forced partnership.”[ii]

Our Western partners are obviously wary of this because despite their displeasure with Ankara's policy neither Washington nor Brussels is going to push relations with Turkey to the point of no return.

"We will continue to work constructively with Turkey to achieve our common interests," US State Department spokesman Ned Price told a news briefing in February.

He was echoed by EU High Representative for Foreign Affairs and Security Policy Josep Borrell, who said that the European Union “will not be able to achieve stability on the continent unless it finds the right balance in its relations with Turkey and the Russian Federation.”

Unlike a hundred years ago, Russia and Turkey now simultaneously interact and compete not only in the Transcaucasus, but also in Syria and Libya. At the same time, they prioritize their own national interests, not ideological schemes, even though in its foreign policy Ankara is trying to combine pragmatism with a whole range of ideological narratives, which has an impact on the situation about the Crimean people’s choice to reunite with Russia as a whole, and on the "problem" of the Crimean Tatars in particular. Ankara apparently uses this rhetoric to emphasize its image of the leader of the "Turkic world."

The rapprochement between Moscow and Ankara is often viewed as situational, but geopolitical tensions are far from being over and unfortunately keep heating up. Therefore, the Anatolian agency, close to the Turkish government, had every reason to state that “both countries feel threatened by the same third centers of power on an increasing number of important issues, or come under pressure from these centers. A souring of relations between the two countries can seriously weaken them in the face of the third forces, and this is something both sides are perfectly aware of.”[iii]

We can add to this that they agree on even the stickiest issues, just like they did a hundred years ago.

[iii] Anadolu (Турция): Will Caucasus have the chance to become a region of peace and cooperation? | Politics | Foreign media – All that is worth a translation (inosmi.ru)