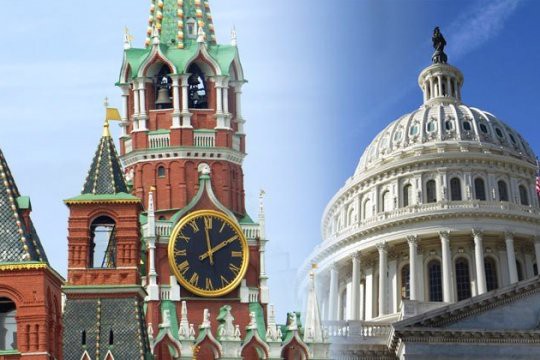 Russia’s Foreign Ministry issued a statement recently saying that bilateral relations between Moscow and Washington have come to a deadlock because of the USA. Is there a way out of the deadlock? The answer to this question was provided by Valery Garbuzov, Director of the Institute of the USA and Canada Studies of the Russian Academy of Sciences, in the course of an online conference at Russia Today press center.

Speaking about the current state of Russian-American relations, Valery Garbuzov recalled what happened in the second half of the 1980s, when the world was analyzing the era of the Cold War between the USSR and the USA. The Soviet historical science was dominated by a view that the blame should rest with the United States – it spread its influence, while the USSR had to counteract the American hegemony. The United States, on its part, accused the Soviet Union of aggression which the Americans had to contain. «In the 1980s, after the discussions were joined by many historians, there appeared a theory of equal responsibility for the conflict which, in my opinion, is applicable to the present day», – he explained.

According to the expert, in order to get out of the crisis, both parties should realize their responsibility and meet one another halfway. «If we continue to blame each other for all deadly sins, this “deadlock” in Russian-American relations will last for at least 4 years, or maybe, 10 years», – the expert said.

Valery Garbuzov is certain that Russia and the United States ought to make mutual concessions. «Without concessions, there will be no movement towards one another. In order to reverse the situation, either party should change something in their behavior, the problem is to figure out what. How extensive should these changes be and are the countries involved ready to make concessions in their foreign policies? At present, I think, neither party is prepared to take such moves, so we all stay where we are», – the director of the Institute of the USA and Canada said.

In addition, Mr.Garbuzov believes that Joe Biden’s team is ready to opt for a “selective cooperation” with Russia: «The incumbent US administration is ready to choose an option which is known as “selective cooperation”. It envisages pinpoint cooperation in areas the US finds lucrative, while, all other, non-lucrative ones, will not be available for cooperation». At the same time, it does not exclude confrontation and does not abolish the sanction regime – sanctions will remain in place, as before.

In the words of the US studies expert, the Russian foreign policy has entered a stage of strategic waiting which provides for a thorough analysis of what has happened. «We are to determine why the two countries found themselves in such a crisis, whether it is possible to get out of it. Or, another option is to accept the situation and wait for things to sort themselves out, for the new generation of politicians to arrive and address the issue from a new angle», – Valery Garbuzov concluded.