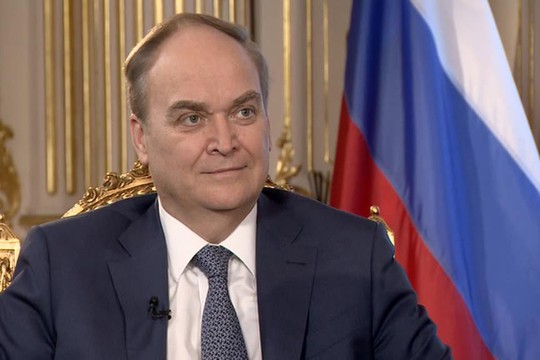 Moscow's envoy in Washington, D.C. recently told Newsweek that, despite the United States' efforts to assert its global leadership through backing Ukraine in its war against Russia, a new international order is emerging in which the U.S. may stand to lose in the long run if it did not move to adapt.

"The Ukrainian crisis is becoming, without exaggeration, a turning point in the history of international relations," - Russian ambassador to the U.S. Anatoly Antonov told Newsweek.

Antonov said that the developments of the past eight years, beginning in 2014 with the uprising that brought to power a pro-West government in Kyiv and a pro-Moscow separatist uprising in Eastern Ukraine, "is a subject of scrupulous study by diplomats, analysts, and political scientists and will be widely reflected in history books."

Reflecting on the events that have ensued since Russia launched what it refers to as a "special military operation" to pursue the "demilitarization" and "de-Nazification" of Ukraine, he expressed confidence that "the heroic struggle of the Russian people against Nazism will be remembered in various parts of our planet." This effort, he said, was a continuation of the Soviet fight against "the brown plague" of Nazi Germany during World War II.

However, Antonov saw a longstanding campaign by the U.S. in the wake of the Soviet Union's collapse "to create an anti-Russian foothold on the Ukrainian territory" through governmental and non-governmental means that he said "encouraged hostility towards everything Russian."

"The question arises: Why was it so important for Washington to create an area of instability at our borders?" Antonov asked. "After all, Russia was already extremely weakened as a result of the events of 1991 and was living through troubled times and couldn't compete with the United States."

In 2008, when NATO first announced that it would consider Ukraine's NATO membership bid at the Bucharest summit, the U.S.-led military alliance also declared its consideration of Georgia's application. Antonov accused NATO members of "bluntly breaking their own promises" not to expand on the territory of the former Soviet Union," though the transatlantic bloc has denied ever giving such assurances.

The Kremlin has also accused Kyiv and its Western supporters of violating agreements over Ukraine, namely the Minsk agreements. The deals were designed to deescalate the conflict in Ukraine after the events of 2014, but Moscow and Kyiv have regularly charged one another with violating the terms of their arrangement and the U.S. consistently backed up Ukraine's claims up until the war erupted.