Russian Finance Minister: We will look for new markets for Russian oil away from the West 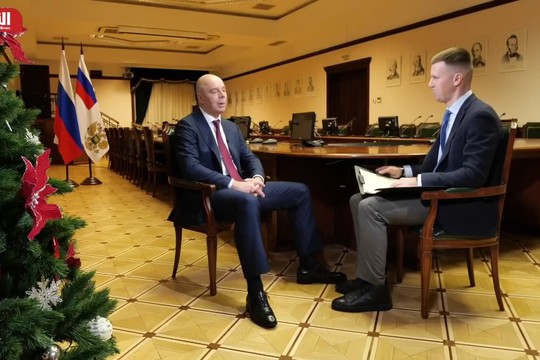 Russian Finance Minister Anton Siluanov in an exclusive interview with Saudi TV-channel ‘Al Sharq’ said the United States is the main beneficiary of Western sanctions and that his country will not supply oil under contracts that impose price caps offered by Western countries.

Siluanov criticized the sanctions imposed on Russian oil, calling them "a completely non-market measure." He believes that Western sanctions have affected Europe to the same extent as Russia: “What happened was what the Americans wanted, their oil and gas supplies to the European market increased... America wins, and Europe loses.”

The Russian Finance Minister said that his country will look for new markets for Russian oil away from the West, and is also looking for alternative logistics, albeit more expensive, but not falling under the price ceiling set by European countries.

He explained that his country may have to cut production somewhere: “Now we see that our companies and oil companies are redirecting their supply lines from the West to the East and to other countries... We are looking for new consumers of oil, so how, according to agencies, the demand for oil will increase... We will look for new markets, we will look for new logistics and, perhaps, it will be more expensive.”

According to the Russian Finance Minister, the price ceiling "will undoubtedly lead to price distortions and market distortions." He added: “Tomorrow, Western countries will set a price ceiling for other manufacturers, with which we cannot agree. We will not supply our main source of energy at certain prices to be determined by Western countries. We won't allow that."

The Minister expects economic growth to decline by less than 3% this year, with inflation slightly above the 12% threshold. He said that the budget base has been updated, limiting the use of oil and gas budget revenues for spending, which made it possible to accumulate reserves in the National Welfare Fund, which helped Russia overcome all the difficulties that it faced under the restrictions.

In the course of the interview, Siluanov touched upon Moscow's tendency to promote the transition to the settlement of trade transactions in national currencies and said that "the currency of Western countries showed its danger" after Europe defaulted on its obligations and froze Russia's reserves in gold and foreign currency, which were stored in dollars, euros and pounds sterling.

The Minister said: “We are moving more and more with our trading partners to accounts in our national currencies... This creates some security and stability, and given that we are restructuring trade relations from West to East, this currency will be needed now.”

Siluanov named the Chinese and Indian economies as the most visible economies that Russia seeks to replace with European markets, and stated that "the West is moving away from Russia... We will look for new trading partners, and we have already found them."

There is no future prospect of the possibility of returning Russian assets confiscated by the West, as the finance minister said the process is "long and slow" and that Russia has frozen some of its obligations to the West. He hopes that the West will sit down at the negotiating table to start discussions on unfreezing by both sides.

According to previous figures, the European Union has banned about 300 billion euros ($311 billion) of Russia's central bank reserves and froze about 19 billion euros of assets owned by Russian businessmen under sanctions that are not final estimates.

According to the Minister's statements, Russia is working to direct its resources towards industrial technology security and invest in sectors left behind by foreign companies in Russia, including technological security.