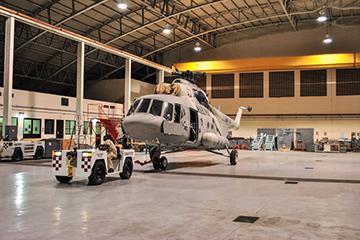 The day before Mexico`s National Navy Day, Mexico received another batch of Russian military helicopters. We are talking about a new delivery of the Mi-17V-5 model, which is made by the Kazan Helicopter Plant. The helicopters were delivered in accordance with a contract signed in December 2011, between the Russian state company "JSC Rosoboronexport" and the Ministry of the Navy of Mexico. Three brand new helicopters were delivered to the Mexican Navy base at "Las Bajadas" in the city of Veracruz by a special flight on an An-124 cargo plane. The helicopters arrived almost ready to use but without the main and tail rotors which were delivered by the same cargo plane. They are now being put together by a specialist team of technicians from the Russian plant that came with the machines. After finishing the assembly and several test flights – which will be done by Russian specialists and pilots - in December this year the helicopters will be officially accepted into the service of the Mexican Navy. They will be used in the country`s main naval bases, including Acapulco and Veracruz. Over the past 3 years, Mexico has already received four new Russian helicopters.

Despite the fact that they have not been officially accepted into service yet, the current President Felipe Calderon Hinojosa and the Minister of the Navy Admiral Mariano Francisco Saynez Mendoza arrived in Veracruz to take part in a special parade for Navy Day on the 23rd of November, and took some memorable photos with the Russian helicopters in the background.. Mexicans are proud to say that the combat power of the country`s Navy is based on Russian equipment. There are 24 Russian helicopters in the service of the Mexican Navy. They are successfully used in various Mexican Navy operations such as the fight against organized crime and drug trafficking, and also for rescue operations. The Mexicans say that Russian equipment is very reliable in all conditions. For example, the Minister of the Navy uses a modified model of a Russian Mi-17 helicopter as a personal transport.

Russia and Mexico are convinced that this transfer of helicopters is a special event for both our countries. There are difficulties in the development of military-technical cooperation between the two countries, as there are still no legal agreements between the governments in this sphere, but despite this Russia and Mexico are willing to cooperate in this area, and this event confirms these intentions. Russian experts say that after the arrival of the new administration of President Enrique Peña Nieto, they expect an increase in activity of military-technical cooperation. Also it is expected that Mexico will place more orders for Russian technology.

Russian military technology is a success in Mexico. In 2006 in the city of Veracruz a large center for the repair and maintenance of Russian helicopters was established. A training center was also built in the same place, where one of the best Russian made flight simulators is used for training not only Mexican but also American pilots. Given the popularity of Russian helicopters in Latin American countries, there are plans to expand the center at Veracruz into a regional one. Experts say that all the preconditions are in place and it's only a question of time.