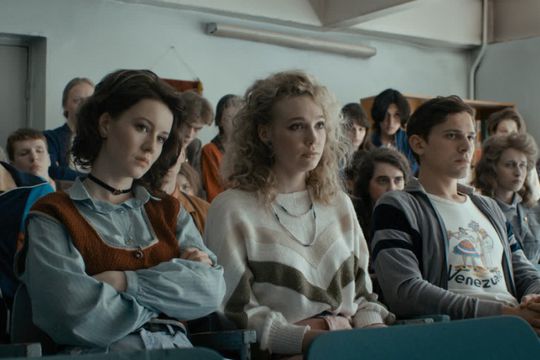 The Dorm marks the directorial debut of Vasyanov, who is best known as David Ayer’s cinematographer on End Of Watch, Fury, Suicide Squad and Bright.

Vasyanov’s debut, which he also co-wrote, is an adaptation of Alexei Ivanov’s novel Dorm To Blood. Set in the Soviet Union of 1984, it follows five students whose friendship is put to the test when a fellow student jumps from the top of their building. Sony Pictures will distribute in Russia.

MetraFilms, founded by Artem Vasilyev, has more than 20 projects at various stages of development, including several new co-productions, series and documentary features.

These include Aleksey German Jr.’s House Arrest, previously titled 30 Days, 30 Nights, which is tipped for a festival berth in 2021. The film, which shot at the end of 2020, follows a scientist who is accused by Russian authorities of embezzling government funds and put under house arrest for 30 days.

The cast is led by Merab Ninidze and Anna Mikhalkova. Mk2 Films has boarded the project for world sales.

MetraFilms produced German Jr.’s previous feature, Dovlatov, which premiered in Competition at the Berlinale in 2018.

Further projects include Alisa Khazanova’s White List, about an investigation into an epidemic of teenage suicides, led by Leviathan star Aleksey Serebryakov; and Michael Idov’s English-language feature Aspiration, about four middle-aged US rockers who travel to a farmhouse in Canada to record one last album. Both projects are in pre-production and the latter is now casting.

MetraFilms has also boarded a number of minority co-productions, an area in which Russian producers are increasingly active since the Ministry of Culture began offering related funding in 2018.

These include Apathy, the new feature from Alexandros Avranas – the 2013 Venice best director winner for Miss Violence – which will be co-produced by France’s Elle Driver and Les Film du Worso; and Siberia from leading Russian theatre director Ivan Vyrypaev, about the wife of a Politburo member who travels to a remote Siberian village searching for inspiration for her new novel, where she is shadowed by a KGB officer.

Siberia is a co-production with Russia’s Address Film and Poland’s Message Film. Producers are Veta Krechetova, Dariusz Jablonski, Izabela Wojcik and Violetta Kaminska with Vasilyev as co-producer. Polish Oscar nominee Pawel Edelman (The Pianist) will be director of photography.

Also in early pre-production is Alexandra Likhacheva’s Kretsul, a biopic about Russian Paralympic athlete Oleg Kretsul and his coach Vitaly Gligor. The project is backed by the Ministry of Culture and received a Eurimages co-production development grant at Transilvania International Film Festival. The producer is Anna Shalashina, with Vasilyev as co-producer – on board to assist Shalashina in her debut project with contacts and financing.

Also on MetraFilms’ slate is Sergey Osipyan’s tragicomedy Portrait Of A Stranger, about a down-on-his-luck actor who meets a charismatic writer in 1976 Moscow and crosses paths with the KGB and CIA. Actors from Moscow’s renowned Pyotr Fomenko Workshop Theatre will appear in the film, which is an Address Film production in collaboration with MetraFilms, with financial support from the Ministry of Culture.