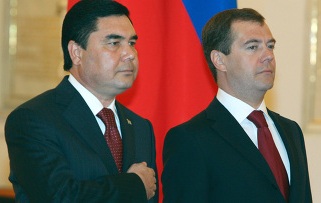 President D. Medvedev's recent talks with his Turkmen colleague Gurbanguly Berdimuhamedow in Ashgabat produced significant results. Importantly, the leaders of the two major gas-exporting countries brought to the negotiating table consonant assessments of the current state of the European gas market. As Russian deputy prime minister I. Sechin explained the situation, Europe's gas demand will be growing minimally in the coming 3-4 years and prospects for increasing gas supply to Europe in the nearest future are dire. Under the circumstances, Russia will not start buying considerably greater volumes of gas from Turkmenistan, but Sechin assured that Russia's energy giant Gazprom will fully abide by its commitments in the framework of existing contracts and import 10-12 bcm of Turkmen gas. At the moment the Russian-Turkmen project to construct the Caspian gas pipeline is also put on hold due to the sluggish demand in Europe. The plan is not altogether abolished but — with due regard for the past agreements — current cooperation priorities in the gas sphere are going to depend on the market dynamics. According to Sechin, the Turkmen administration has no objections to the approach.

No doubt, the economic downturn will surely end some day, and it was important to both Russia and Turkmenistan to reaffirm during the talks the strategic character of their partnership. The fact that Russia's president chose to visit Turkmenistan roughly at the same time the Central Karakum-Russia pipeline linking  the Zyakli-Darvaza gas field and the Central Asia — Center pipeline was phased in signals the long-term mutual interest of the two countries. The new pipeline will add some 5 bcm annually to Turkmenistan's gas export capacities.

Demand contraction in Europe affects all of its potential gas suppliers, not only Russia and Turkmenistan. This must be the logic behind the conclusion voiced by Sechin that Nabucco, the West's pipeline project meant to route gas supplies to Europe around Russia, simply stands no chance.

Ashgabat, on the other hand, is keenly interested in exporting natural gas without resorting to Russia's transit capacities. Obviously, China and Iran are not regarded by Turkmen suppliers as optimal partners considering that neither of the two will  consent to European-level prices. While the two countries pay $165 and $170 per 1,000 cu m of gas imported from Turkmenistan, the price Gazprom as the transiter of Turkmen gas declared in Europe is $305. As a result, Turkmenistan is searching for alternative outlets to supply gas to Europe. The potential threat for Turkmenistan's Russian partners in the context stems from the fact that the alternative route traversing the Caspian Sea and the Caucasus — the one identical to Nabucco — is shorter and therefore more cost-efficient.

At present the unresolved dispute over national segments of the Caspian Sea prevents offshore pipeline construction in the region. Due to the reason, the right of the Caspian countries — Russia, Iran, Kazakhstan, Turkmenistan, and Azerbaijan — to define the Caspian Sea status independently was a recurrent theme during the talks in Ashgabat. President Medvedev stressed — and the Turkmen leader agreed - that the five countries are entitled to regulate the use of the region's natural resources. In the light of the consensus between Russia and Turkmenistan on the issue, it seems unlikely that realistic projects of constructing pipelines across the Caspian Seabed will surface any time soon.

Moscow may be wary to let Turkmenistan gain independent access to the European gas market but will eagerly assist Ashgabat in reaching out to other potential buyers. Notably, Russia's involvement in the supply of Turkmen gas to India and Pakistan across Afghanistan was on the agenda of the talks in Ashgabat. Sechin said Gazprom's admission to the corresponding pipeline project — as a contractor, the company responsible for pipeline design, or an equal consortium partner - is being discussed with Turkmenistan. Gas is supposed to be fed to the Turkmenistan- Afghanistan — Pakistan — India pipeline from the Dauletabad  field believe to contain some 1.7 — 4.5 trillion cu m of natural gas. Investments for the project are pledged by the Asian Development Bank. The target throughput of the 1,680 km — pipeline is 30 bcm annually and the project total is estimated at $4 bn.

On the whole, president Medvedev's visit helped sustain frank dialog between Russia and Turkmenistan on the countries' cooperation in the gas sphere. It was a timely effort to overcome various grievances and lack of understanding on both sides and to map the common road to the future. Russia offers Turkmenistan serious investments in alternative projects like the Turkmenistan-Afghanistan-Pakistan-India pipeline as a compensation for not being able to buy the volumes of natural gas Turkmenistan is willing to export. At the same time, Moscow seized the opportunity to reiterate its opposition to Turkmenistan's supplying a part of the resource base for Nabucco, the Western-planned pipeline circumventing Russia, and thus made an important step in the long-term rivalry over the Caspian energy resources which play a key role in the Eurasian gas market.