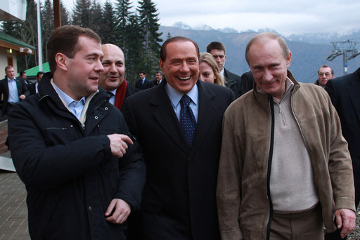 The Italian diplomacy is traditionally built on a sophisticated play and intricate maneuvers among various allies and friends. This is an explainable choice of strategy for the country which was the last to join the club of great powers and emerged as a mid-level player only in 1943. Italy always sought to ally itself with a more powerful ally whose backing helped Rome to implement its own policy. At the same time, Rome's tendency was to avoid over-reliance on the senior partner and to cultivate a relationship with another country – a friend rather than an ally – employing the combination to reinforce Italy's autonomy in international politics.

In 1871, following the demise of France's Second Empire and Third Republic, Rome had to drop the idea of an alliance with Paris and – after a period of uncertainty – turned to Berlin. The epoch was marked with brisk political dynamics and fairly dissonant initiatives as Italy was balancing its loyalties to its Austrian and German allies on the one side and its French and British “friends” on the other. It was at that time that Italy struck its first ever accord with Russia.

The outbreak of World War I in 1914 forced Rome to decide which of the fighting coalitions to join, and it opted for the side which might otherwise be a source of a greater peril to Italy. Thus the country found itself in the company of three powerful allies - France, Great Britain, and the US – and one friend who was able to lend it a hand. Even not posing an immediate threat to Italy, Great Britain and France were not open to a positive relationship with it: both showed that it was not in their interests to help Italy in the Balkan region, in the Mediterranean, and in Africa. As for the US, Woodrow Wilson had a general aversion to the Italian diplomacy. As a result, Rome felt that the alliance with more powerful players kept it under pressure, which may in part be the explanation behind the fact that Italy was the first European country to grant recognition to the Soviet Union as declared by Mussolini on February 7, 1924. For a while, the USSR became Italy's friend providing a counterforce to its allies. The arrangement did prove short-living – fairly soon Italy's international politics was completely reoriented towards Germany.

During World War II, Mussolini became Italy's third leader after Napoleon and Cavour to send Italian soldiers to fight Russia. As in the two previous cases, in doing so Rome propped up its aggressive ally rather than pursued Italy's independent geopolitical interests. It is an established fact that Hitler did not even bother to consult Mussolini about the launch of Operation Barbarossa. Instead, Mussolini learned about the German invasion of the USSR from a morning newspaper and – quite prophetically – exclaimed that this was the end and that the war was lost.

Unluckily, by the end of World War II Moscow did not develop an appreciation for Rome's potential to take a role in putting the Soviet geopolitical designs into practice, and the deficiency persisted for several decades. Yet, the view that friendship with the USSR/Russia could afford Italy additional independence in international politics at the face of Washington's pushiness – especially, in the Mediterranean affairs - remained deeply entrenched among a part of the Italian ruling class.

The end of the bipolar confrontation echoed with a crisis in Italy's diplomatic thinking. Absent an overarching threat to Europe, the country need not contribute to NATO more than it already does and Rome should revert to the traditional model implying a balance between the hyperpower ally and a strong “friend”.

The Russian comeback in the world politics since 2000 broadened the Italian diplomatic vision and gave a boost to Rome's awareness of its own geopolitical role. The current Italian premier's cordial relations with Moscow certainly hold a promise of deeper mutual understanding.