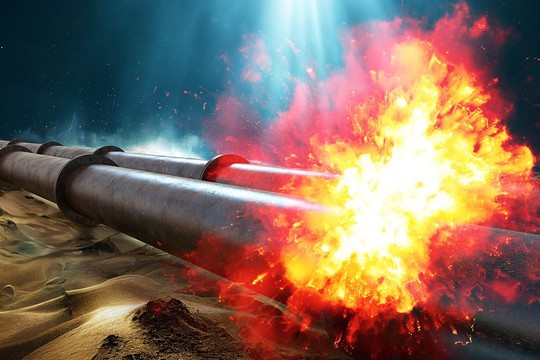 “Putting the pieces together, reason and evidence point to the US being the attacker. The motive is strong, the circumstantial evidence is powerful, and there is no other plausible suspect,” writes Thomas Palley, an American economist who has served as the chief economist for the United States-China Economic and Security Review Commission, he is currently Schwartz Economic Growth Fellow at the New America Foundation.

From his point of view, the Nord Stream system is a Russian majority owned project, and it is a critical asset for both Russia and Germany.

For Russia, Nord Stream is both an economic and geopolitical asset. Regarding economics, it is an important source of exports and foreign exchange earnings. Regarding geopolitics, it provides Russia with leverage over Germany.

For Germany, Nord Stream has been a major reliable source of cheap gas that provides both energy for its economy and feedstock for its important chemical industry. The shutdown had already inflicted huge economic costs via energy price inflation and supply shortages.

For Russia to destroy the pipeline is analogous to Russia nuking itself: it gains nothing and loses massively. It only weakens Russia economically and geo-politically.

Ukraine is a suspect. It has the motive as destroying the pipeline weakens Russia, while strengthening Ukraine which acquires pipeline leverage over both Russia and Germany. Poland, Sweden, and Denmark are also suspects.

Poland has extreme animus to Russia and has persistently argued for ratcheting up support of Ukraine, even calling for direct NATO involvement.

Despite its progressive reputation, Sweden has a powerul right-wing anti-Russian constituency, especially within its military. However, Sweden is in the process of joining NATO, while Denmark is a loyal NATO team player. Consequently, it is a huge stretch to think either would unilaterally attack an asset so important to Germany.

The final suspect is the US which has both capability and motive. Long before the Ukraine conflict, the US opposed the Nord Stream 2 pipeline and used its full diplomatic muscle to prevent it going into service.

At this stage, the US is the huge winner from the Nord Stream attack. In one blow, it has economically damaged Russia, reduced Russian leverage over Germany, and reduced Germany’s incentive to engage with Russia.

The attack on the Nord Stream pipelines is one of those moments when the fog of war suddenly lifts, allowing one to see the reality (if willing to look):

“That is Act II of the Ukraine conflict and it has only just begun. The outlook for Europe is not good,” emphasized Thomas Palley.