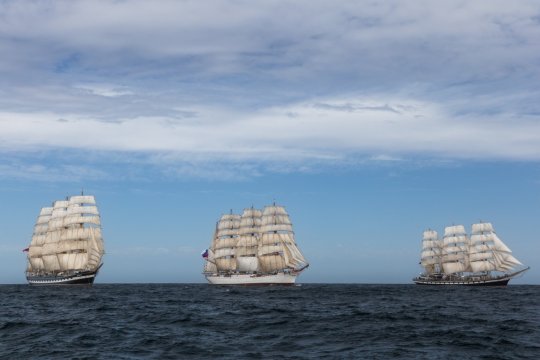 In 1820, Russian seafarers Faddey Bellingshausen and Mikhail Lazarev discovered the world’s last, sixth, continent - Antarctica, thus completing the era of Great Geographical Discoveries. Two centuries on, three training sailing vessels of the Russian Federal Fisheries Agency (Rosrybolovstvo) – the Pallada, the Kruzenshtern and the Sedov, virtually repeated the route of that glorious circumnavigation. The project was dedicated not only to the 200th anniversary of the discovery by Russian seafarers of the planet’s southernmost continent, but also to the 75th anniversary of the Great Victory of 1945.

At an online conference, held at the TASS press center in Moscow, the captains of the three sailboats shared their impressions of the expedition and of the seaports they had called at during the voyage.

Last year, President Vladimir Putin declared 2020 as the national Year of Antarctica, and proposed a unique initiative for a round-the-world voyage by training sailboats under the flag of Russia and the White Sails of Peace. According to the deputy head of the Federal Fisheries Agency, Pyotr Savchuk, it was the first such undertaking in the entire history of the Agency.

The frigate Pallada sailed around the world. Setting off from Vladivostok on November 1, 2019, the ship logged more than 25,000 miles during her seven-month voyage, crossing the Pacific, Atlantic and Indian Oceans, the equator (twice) and casting anchor at six ports: Apia (Samoa), Papeete (Tahiti), Valparaiso (Chile), Ushuaia (Argentina), Cape Town (South Africa), and Singapore. During the expedition, over 4,000 foreign guests stepped aboard the ship.

According to the rector of the Far Eastern State Technical Fisheries University, Oleg Shcheka, during her passage from Cape Town to Singapore, the Pallada set a record for self-contained navigation (over 50 days), thus proving the professionalism of the crew and the high-level of technical training of the Russian fleet.

“We have once again proved that our sailors and naval commanders are the finest around,” Shcheka noted.

On June 3, the Pallada returned to Vladivostok, along with the Sedov, which had not yet finished the route. The Sedov had sailed from Kaliningrad on December 8, 2019. After replenishing fuel and food supplies, as well as taking aboard a new crew of cadets, she will resume her journey across the Pacific and Atlantic Oceans. The ship's captain Yevgeny Romashkin said that the start of the second stage of the expedition is scheduled for June 22.

In his turn, Pyotr Savchuk emphasized that the coronavirus pandemic had necessitated certain changes that had been made in the course of the expedition, including a significant reduction of the number of foreign ports of call, altering the course and even replenishing provisions at sea.

“The route of the barque Sedov is well thought out in terms of security: we will exclude visits to ports where outbreaks [of the epidemic] may occur,” the deputy head of the Federal Fisheries Agency said.

He also emphasized that since no cases of COVID-19 infection had been registered on any of the sailboats, upon their arrival home the Federal Service for Surveillance on Consumer Rights Protection and Human Wellbeing (Rospotrebnodzor) will not apply any "restrictive" measures to the ships’ crews.

The Kruzenshtern made an Atlantic crossing, sailing from Kaliningrad on the same day with the Sedov. The ship’s captain Mikhail Yeryomchenko said that the Sedov had finished the voyage a bit earlier than planned. The Kruzenshtern was originally supposed to complete the expedition on September 3, but due to the adverse epidemiological situation many port cities and countries that were awaiting the Russian sailors’ arrival were counted out, including the ports of Sevastopol and Sochi. In Novorossiisk they all but fleetingly participated in festivities being held there.

“Despite all the problems encountered along the way, the Kruzenshtern completed its noble mission with flying colors as part of the Sails of the World,” Kaliningrad State Technical University rector Vladimir Volkogon said. The expedition lasted 176 days, the barque logged over 23,000 miles, visited seven 7 ports and welcomed on board around 10,000 guests. During the voyage, 119 Federal Fisheries Agency cadets underwent practical training and passed exams, each in their own specialty.

Mikhail Yeryomchenko recalled the severe storms the ships had encountered during the voyage.

“Month-long transitions are the most demanding of all. First, you sail from South America all the way to the Canary Islands, then to Novorossiysk, and from there to Kaliningrad. And all that time we also maintained self-isolation,” he emphasized.

This did not make the sailors feel alienated though, Yeryomchenko added. There were many different events held on board, including #Myvmeste, aimed at encouraging mutual assistance in the fight against coronavirus, and which helped the cadets offer moral support for their relatives and friends while being thousands of miles away from home. On May 9, they had an action held as part of the nationwide Immortal Regiment event.

The highlight of the expedition was a 200-mile memorial sailing regatta, which the three tall ships held at the southernmost tip of the Atlantic. The race was led by the head of the Baltic State Academy of Fishing Fleet’s department of navigation and practical training, Mikhail Novikov, who said that the 200-mile route was in memory of the 200th anniversary of the discovery of Antarctica. The regatta kicked off on February 20 amid a Force 8 storm.

“Fortune smiled on the heavy Sedov and Kruzenshtern sailboats, because they were expressly designed to handle rough seas. They managed to finish just a tad ahead of the Pallada,” Novikov said. The competition continued for exactly one day, and the crew of the Kruzenshtern barque won by a small margin.

“It would be no exaggeration to say that this race was a thing to remember, providing the world with unique images of this major-scale event,” Pyotr Savchuk said.

At the dawn of the 19th century, Russian naval ships performed a series of circumnavigations contributing heavily to erasing the last remaining "white spots" from the world map. Those expeditions helped complete the creation of a network of marine communications covering the entire globe. Impressed by the success of those circumnavigations, Emperor Alexander I decided to send an expedition to prove the existence of the sixth continent.

On June 16, 1819, two Navy sloops, the Vostok and the Mirny, set off from Kronstadt. The first was commanded by Faddey Bellingshausen, and the second by Mikhail Lazarev. There were 111 hands on board the Vostok, and 70 on the Mirny.

January 16, 1820, the day when the sloops approached what is now known as the Bellingshausen Glacier, went down in history as the official date of discovery of the world’s sixth continent – Antarctica.

The expedition ended on August 5, 1821 having sailed for 751 days and logging over 49,000 miles (more than twice the length of the equator). In addition to Antarctica, the expedition discovered 29 islands and one coral reef. The scientific materials collected during the expedition gave scientists the initial idea of the southernmost continent.