Sanctions against Russia or US war against Europe? 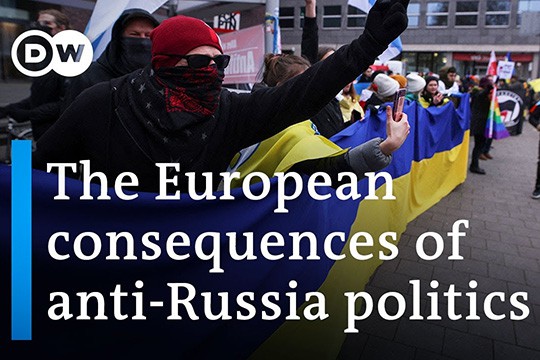 Most serious observers agree that the sanctions regarding Russian oil decided upon recently by the EU, will not only not hurt Russia’s revenues, but will probably boost them by raising the price of oil. These sanctions will at the same time damage a European Union that is badly needing to import energy and which seems well heading into a process of becoming a “third world zone” inside the so called “first world”, writes well known European international observer Dimitris Konstantakopoulos.

The EU and its allies in the G7 do not, nor can control the global oil market. The price ceiling and the embargo on Russian oil will probably end up in practice with an increase in the general oil price and cheaper prices for the Russia’s remaining clients. It will represent a gift to Russia, India, China, Iran, Venezuela, all enemies or potential enemies of the West, including Türkiye, which is making fantastic profits by maneuvering economically and geopolitically between Moscow and Washington.

‘The Economist’ in its last issue it points out that all the sanctions against Russia will lead to a deterioration of the living and heating conditions in 19 EU countries it is studying, even provoking 75.000 deaths more than the average. Those states will have to pay 140 billion Euros to be able to help alleviate the lowering of the living standards.

If we were at the beginning of the sanctions war against Russia we could claim that this policy is due to a miscalculation and attribute it to some kind of “stupidity” of the EU.

The war that NATO and the “collective West” has waged against Russia by means of sanctions, looting of Russian state and private property, arming Zelensky with more and more sophisticated weapons, demonizing Russia and Russians etc., is not only intended to weaken and, if possible, dismantle Russia as a great power. It also aims to subjugate Europe forever to the United States. And one way to do it is to destroy once and for all the possibility of close relations between Europe and Russia.

If this is the aim, then it makes sense to impose sanctions on Russian oil, because it is much easier to impose than to lift such sanctions. Thus and for an indefinite period, the resumption of any energy co-operation between Europe and Russia will become much more difficult than it is now.

If this is the aim, it made sense to blow up the two NordStream pipelines. If Germany decides tomorrow to change its policy and resume imports of Russian gas, it will be objectively more difficult to do it if the two pipelines do not work.

Moreover, if you aim is to destroy the very foundations of any future resuming of European – Russian relations, you need to do all that now, to exploit the present circumstances as much as possible, because you are afraid that Germany, France or Italy may “crack”, as they are already facing a serious economic and social crisis, intensified by NATO’s sanctions war against Russia.

Even if this is not one of the central aims of the sanctions policy, imposed by Washington, London and the lobby of the “New Europe” and a Commission acting as a NATO lobby, the subjugation of Europe to the US in all major policy fields is the practical result of the policy followed.

European states are rearming themselves by buying US, not European, arms. They are increasing their share of the totality of NATO’s military budgets, to the relative benefit of the US. They are adopting fanatical, sometimes purely racist, anti-Russian propaganda and ideology, revising even the history of the liberation of Europe from Nazism and Fascism, thus making extremely difficult any change of policy in the future.

Instead of emitting a project for a new democratic, social, peaceful and ecological vision for the whole world, based on the considerable accomplishments of Europe in its history, the Continent is becoming rapidly a miserable vassal of the United States.

It is worth remembering that nearly all European politicians of the 20th century remembered positively by the collective memory of European nations and peoples believed the same: Charles de Gaulle, Willy Brandt, Olaf Palme, Aldo Moro and Andreas Papandreou, to name a few. If a rapprochement between Europe and Russia were to take place at some point in the future, it would be a disaster for the American hegemonic claims.

This seems to be one of the strategic necessities that are driving US policy in Ukraine. And they are in a hurry to take advantage of the Ukrainian situation, because they do not have confidence that the Europeans will not “break” along the way. That is why they were furious even with Macron’s so timid and future-oriented openings to Moscow. They have to destroy what they can between Europe and Russia, as definitively as they can, and do it now.