Sanctions’ result: ’West might have taken steps toward its own isolation’ 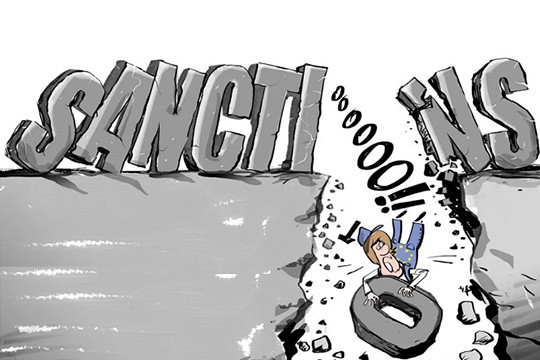 We present new publications from the Western press on the effectiveness of sanctions against Russia. This is «Is America the Real Victim of Anti-Russia Sanctions?» from «Tabletmag.com». They say: «By misjudging the size and importance of Russia’s economy, the West might have taken steps toward its own isolation»:

- Remember the claims that Russia’s economy was more or less irrelevant, merely the equivalent of a small, not very impressive European country? Of increasing Russian diplomatic and geopolitical influence in Europe, the Middle East, and East Asia, The Economist asked in 2019, “How did a country with an economy the size of Spain… achieve all this?”

- When push comes to shove, we know there is more value in providing people with the things they really need to survive like food and energy than there is in intangible things like entertainment or financial services. When a company like Netflix has a price-earnings ratio three times higher than that of Nestlé, the world’s largest food company, it’s more likely than not a reflection of market froth than of physical reality. Netflix is a great service, but as long as an estimated 800 million people in the world remain undernourished, Nestlé is still going to provide more value.

- The current crisis in Ukraine has helpfully clarified how much we’ve taken for granted the “antiquated” side of modern economies like industry and commodities—prices for which have surged this year—and perhaps overvalued services and “tech,” whose value has recently crashed.

- The size and importance of Russia’s economy is further distorted by ignoring global trade flows, in which Sapir estimates that Russia “may account for maybe as much as 15%.” While Russia is not the largest producer of oil in the world, for example, it has been the largest exporter of it, ahead even of Saudi Arabia. The same is true for many other essential products such as wheat — the world’s most important food crop, with Russia controlling about 19.5% of global export s— nickel (20.4%), semi-finished iron (18.8%), platinum (16.6%), and frozen fishes (11.2%).

- Such commanding importance in the production of so many essential commodities means that Russia, like few other countries on the planet, is in many respects a linchpin of the globalized production chain. Unlike “maximum sanctions” on a country like Iran or Venezuela, attempting to cut the Russian link has meant and will likely continue to mean a dramatic reorganization of the global economy.

- That would put the combined Chinese and Russian economies at about 30%-35% of the global economy (again, adjusting for PPP and the overvaluation of the service sector) — a behemoth and likely unsustainable challenge for a trans-Atlantic community that looks increasingly focused on using maximalist economic sanctions to punish bad actors and achieve desired policy outcomes. That challenge becomes even more daunting when we consider that the service sector accounts for roughly 77% of the U.S. economy and 70% of the EU’s—suggesting a potentially significant degree of overvaluation in Western economic heft, and far more parity in relative economic power with China and Russia.

- Before we enthusiastically embrace a new Iron Curtain, therefore, it’s worth pausing to consider how many countries in the world will voluntarily place themselves on our side. The countries of what we consider “the West” wil l— for ideological and historical reasons, in addition to economic and military enmeshment — undoubtedly remain relatively united. But the West only accounts for about 13% of the world’s population, with China and Russia together making up about 20%. That leaves about two-thirds of humanity “nonaligned,” a position that most of them would like to maintain. If we force them to choose a side, we may be surprised by many of the results.

- A tally of the countries participating in current sanctions on Russia, in fact, makes it hard to say whether a new Iron Curtain is being drawn around our adversaries or around the West itself. Countries and nominal U.S. allies as significant as India and Saudi Arabia have been particularly vocal in their refusal to take sides in the conflict in Ukraine.

- Countries that have refused to participate in sanctions are now taking advantage of the opportunity to negotiate for Russian energy deliveries at steep discounts. If Russia is still able to sell oil around the world, countries like India are able to negotiate for below-market prices, and Western consumers are being hammered with inflated prices, who is really being sanctioned? A similar principle applies to the weaponization of the U.S. dollar and the Western financial system in general: If non-Western countries are increasingly told that access to dollars and transaction systems like SWIFT are conditional on policies made in Washington that may not necessarily be in their own self-interest, the result may be a de-dollarization of the global economy, not a strengthening of the Western order.

- It’s possible that the West, in a fit of self-righteousness and a need to satisfy various domestic demands, may be diving headlong into a future in which the global South and many others besides feel increasingly pressured to make a choice they don’t want to have to make, and which may leave the West more isolated than ever before in modern times.

And now Bloomberg – «Europe’s Push to Punish Putin Is Falling Short of the Rhetoric»:

- As the European Union’s impasse over its supposedly imminent Russian oil embargo stretched into days and then weeks, one ambassador quoted Samuel Beckett’s play “Waiting for Godot” to his colleagues: “Nothing happens, nobody comes, nobody goes, it’s awful!” Diplomats and officials are getting increasingly frustrated the EU may be reaching the limits of the short-term pain it can inflict on Russia.

- Member states are failing to deliver on promises to hit President Vladimir Putin where it hurts: the lucrative energy industry. The focus has been on Hungary’s refusal to back sanctions, but other countries are yielding to Putin’s demands for gas payments in rubles. Russia is expected to earn about $320 billion from energy exports this year, up by more than a third from 2021.

- The unflattering optics highlight the limits of the EU’s strategy to back tough rhetoric with action that requires unanimity among all its 27 members.

- One minister noted at a recent meeting of EU ministers that it was regretful that some operators had opened accounts in rubles contrary to what they were communicating publicly. “If we get stuck on oil, and the war drags on with no winner and no loser, we could see a scenario in which EU unity starts fraying,” said Nathalie Tocci, a former adviser to EU foreign policy chief Josep Borrell.

- At a meeting of diplomats in Brussels on May 18, an ambassador compared his group to unpromising students who risked failing in the eyes of their own citizens.

- Indeed, EU members are finding it harder and harder to reach agreement because the sanctions being considered mean imposing higher burdens on their national finances, officials said.

- “At the beginning, the unity we showed after the 24th of February was quite extraordinary,” Dutch Defense Minister Kajsa Ollongren said in an interview. Now, it’s getting more difficult, she said, but “we’re good at solving, we’re good at finding compromises in the European Union.”

…They are becoming more and more disillusioned in the West with the sanctions against Russia.