Sanctions war around Hong Kong – who will be the winner? 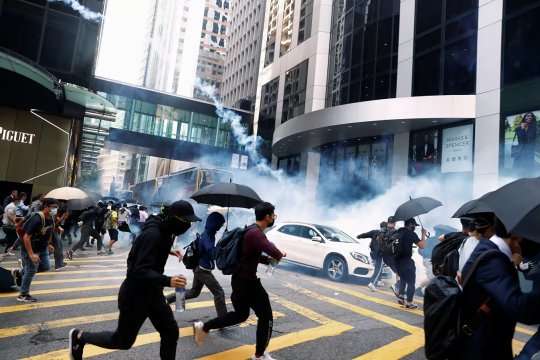 US President Trump has signed into law a sanctions bill to punish China for the situation in Hong Kong, and an executive order that strips trade privileges from China’s special administrative region in what can be regarded as the start of a "sanctions war" around Hong Kong with unpredictable consequences.

The decree lays out a raft of tough measures, and to put it into effect Trump used the same tactic as the one he applied when preparing his earlier decree on the construction of the wall along the Mexican border: the introduction of a state of emergency. The Hong Kong situation, the decree states, “constitutes an unusual and extraordinary threat, which has its source in substantial part outside the United States, to the national security, foreign policy, and economy of the United States. I hereby declare a national emergency with respect to that threat.”

The decree also says that “it shall be the policy of the United States to suspend or eliminate different and preferential treatment for Hong Kong to the extent permitted by law and in the national security, foreign policy, and economic interest of the United States.” [1]

The sanctions bill is very aggressive as it combines previous and new  measures of administrative and economic nature. It eliminates the preference for Hong Kong passport holders as compared to PRC passport holders; revokes license exceptions for exports to and re-exports from Hong Kong that provide differential treatment compared to those license exceptions applicable to exports to China; suspends the agreement between the US government and the government of Hong Kong for the surrender of fugitive offenders and the transfer of sentenced persons; ends the provision of training to members of the Hong Kong police and security services in the United States; terminates the Fulbright exchange program with regard to China and Hong Kong; terminates the agreement for the reciprocal exemption with respect to taxes on income from the international operation of ships.

The decree also provides for the arrest of the property in the United States of persons and organizations, involved in the development and implementation of the Hong Kong Security Act.

Beijing’s response to these measures was predictably tough, with Deputy Foreign Minister Zheng Zeguang summoning US ambassador Terry Branstad to lodge a protest and warning that to protect its legitimate interests China would respond with retaliatory measures, including sanctions against organizations and individual US citizens. [2]

Unfortunately, the bill, inked by Trump, has already had a serious side effect with a number of US firms, including Google, Amazon and Microsoft, now refusing to provide regulators in Hong Kong with access to cloud storage that contains customer financial data. Business is playing it safe, as they say: according to the rules of the Hong Kong regulator, cloud service providers are required to provide access to their customers' data without prior notice, but formally such data are not part of the Hong Kong Security Law. [3]

China is sure to hit back with counter-sanctions, both symmetrical and asymmetrical. What is most important, however, is just how far these sanctions war will go and how much damage the US sanctions are going to cause. Meanwhile, Washington is mulling the possibility of going overboard in its present conflict with Beijing. Being the third largest dollar market around, Hong Kong has its currency pegged to the greenback. There have been proposals to limit Hong Kong's access to dollars as a means of destroying its status as an Asian financial center. Unlike the Chinese yuan, the Hong Kong dollar is freely convertible and its exchange rate has been pegged to the American one for almost 40 years now. This makes the autonomy’s financial system attractive to foreigners, who know that they will always get back the money they invest in the local economy, company shares and financial instruments.

However, it should be borne in mind that China is the largest holder of dollars outside the United States. A third of China’s forex reserves, equivalent to over $3 trillion, are held in US dollars, as is a sizeable share of its $2 trillion foreign investments. If Hong Kong feels the need to secure its currency’s peg to the US dollar, then it is Beijing, not the US Federal Reserve that can fully satiate its demand for dollars. [4]

Even though a radical scenario like this has not really been considered so far, even the measures already taken by the Trump administration are able to cause serious damage both to Hong Kong and the People’s Republic as a whole. The impact of the current sanctions war and the future of US-China relations will depend on the nature and scale of China's response. Meanwhile, the entire world economy eagerly awaits the outcome of this battle of giants…