Saudi Arabia wants to cooperate with Russia despite Western protests 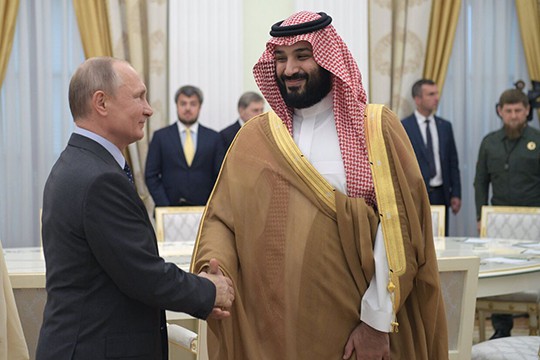 Saudi Arabia will support Russia as a member of the OPEC+ group of oil producers while the West tries to isolate Moscow and its economy, - writes the Financial Times. In this kingdom – the world's largest oil producer – they believe that "OPEC + should remain out of politics.

The fact is that the United States and the United Kingdom began to actively "pressure" Saudi Arabia in an attempt to get it to dramatically increase oil supplies to the market, and thereby lower prices, which now exceed $ 100 per barrel. At the same time, it will soon be necessary to revise the framework of the OPEC + agreement, which includes OPEC countries and Russia. This group of states is now the key for determining prices since it provides almost half of the world's oil.

Despite the pressure, Saudi Arabia has made it clear that it will support Russia as a member of the OPEC+ group of oil producers. The kingdom's energy minister, Prince Abdulaziz bin Salman, said in an interview with the Financial Times that Riyadh hopes to work out a new agreement with OPEC+ countries including Russia.

Times are changing, and the traditional American ally Saudi Arabia is now turning away from Washington and decided to support Moscow at a time when the West is trying to isolate Russia in the global economy.

It should be recalled that OPEC+ has been continuing to coordinate its efforts on the world oil market for several years, and is now facing new challenges related to Western sanctions against Russia. However, OPEC+ intends to continue its cooperation. And this is very annoying to the West which demands lower prices.

But prices may still rise due to the actions of the West itself. Indeed, according to the forecasts of the International Energy Agency, oil production in Russia may decrease by another three million barrels per day due to new sanctions. Europe intends to reduce its dependence on Russian oil and gas including a possible ban on the import of Russian oil to EU countries. But this only leads to an increase in prices. Brent crude is trading at $112 per barrel.

Why is the US putting so much pressure on Saudi Arabia? Because it is not only the leader of OPEC and the world's largest oil exporter, but since 2016 it has been coordinating oil production quotas with Russia. That's when OPEC+ appeared.

Prince Abdul Aziz bin Salman said that OPEC+ should remain out of politics. He is confident that this alliance must be preserved so that  facing growing uncertainty in the global economy it will be possible to make necessary adjustments in future.