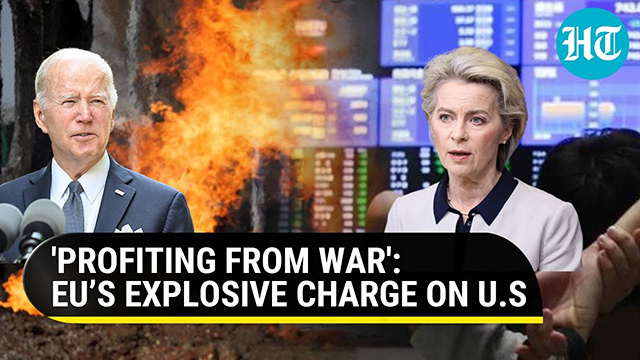 Top European officials are furious with Joe Biden’s administration and now accuse the Americans of making a fortune from the war, while EU countries suffer. “The fact is, if you look at it soberly, the country that is most profiting from this war is the U.S. because they are selling more gas and at higher prices, and because they are selling more weapons,” one senior official told POLITICO.

“We are really at a historic juncture,” the senior EU official said, arguing that the double hit of trade disruption from U.S. subsidies and high energy prices risks turning public opinion against both the war effort and the transatlantic alliance. “America needs to realize that public opinion is shifting in many EU countries.”

The biggest point of tension in recent weeks has been Biden’s green subsidies and taxes that Brussels says unfairly tilt trade away from the EU and threaten to destroy European industries. Despite formal objections from Europe, Washington has so far shown no sign of backing down.

As they attempt to reduce their reliance on Russian energy, EU countries are turning to gas from the U.S. instead — but the price Europeans pay is almost four times as high as the same fuel costs in America. Then there’s the likely surge in orders for American-made military kit as European armies run short after sending weapons to Ukraine.

Officials on both sides of the Atlantic recognize the risks that the increasingly toxic atmosphere will have for the Western alliance.

"The U.S. is following a domestic agenda, which is regrettably protectionist and discriminates against U.S. allies," said Tonino Picula, the European Parliament's lead person on the transatlantic relationship.

Cheaper energy has quickly become a huge competitive advantage for American companies, too. Businesses are planning new investments in the U.S. or even relocating their existing businesses away from Europe to American factories. Just this week, chemical multinational Solvay announced t is choosing the U.S. over Europe for new investments, in the latest of a series of similar announcements from key EU industrial giants.