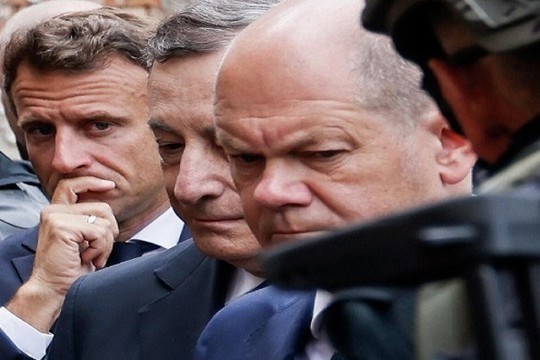 France and Germany want to negotiate with Washington about ‘unfair competition’, but they are ready to ‘hit back’ if necessary, discovers POLITICO. After publicly falling out, Olaf Scholz and Emmanuel Macron (photo) have found something they agree on: mounting alarm over unfair competition from the U.S. and the potential need for Europe to hit back.

The German chancellor and the French president agreed that recent American state subsidy plans represent market-distorting measures that aim to convince companies to shift their production to the U.S., according to people familiar with their discussions. And that is a problem they want the European Union to address.

The meeting of minds on this issue followed public disagreements in recent weeks on key political issues such as energy and defense, fracturing what is often seen as the EU's central political alliance between its two biggest economies.

But even though their lunch came against an awkward backdrop, both leaders agreed that the EU cannot remain idle if Washington pushes ahead with its Inflation Reduction Act, which offers tax cuts and energy benefits for companies investing on U.S. soil, in its current form.

Specifically, the recently signed U.S. legislation encourages consumers to “Buy American” when it comes to choosing an electric vehicle — a move particularly galling for major car industries in the likes of France and Germany.

The message from the Paris lunch is: “If the U.S. doesn't scale back, then the EU will have to strike back”. Similar incentive schemes for companies will be needed to avoid unfair competition or losing investments. That move would risk plunging transatlantic relations into a new trade war.

Scholz and Macron agreed the EU must act if the US progresses a 'Buy American' act offering incentives for companies investing on US soil, which would particularly affect French and German electric vehicle industries.

Crucially, Berlin — which has traditionally been more reluctant when it comes to confronting the U.S. in trade disputes — is indeed backing the French push. Scholz agrees that the EU will need to roll out countermeasures similar to the U.S. scheme if Washington refuses to address key concerns voiced by Berlin and Paris, according to people familiar with the chancellor's thinking.

Scholz and Macron want to try to reach a negotiated solution with Washington.