Scholz in China was on the side of German business and… Russia? 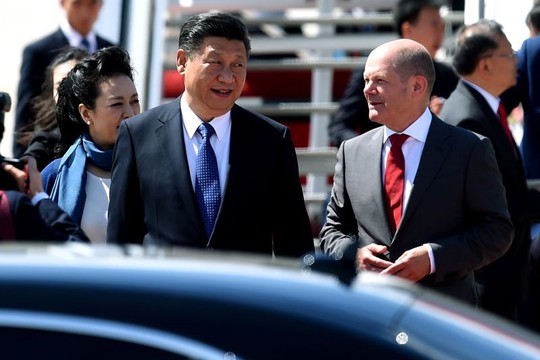 As the German chancellor’s controversial trip to China shows, economic interests have become harder to sacrifice to professed moral values at a time of crisis, - writes Bloomberg columnist Pankaj Mishra.

The new cold war is not going as well as some in the West seem to think. In the same week that elections in Brazil brought back to power Luiz Inacio Lula da Silva, China’s stalwart ally in Latin America, German Chancellor Olaf Scholz will be the first major Western leader to visit China after three tumultuous years when the pandemic and then Russia’s assault on Ukraine irrevocably changed the world.

Conflicting views on how to deal with Beijing exist at the highest policy-making levels of even a major Western democracy such as Germany. Scholz’s own foreign minister, Annalena Baerbock of the Green Party, does not approve of his visit to China. She regards the country as a “systematic competitor” and calls for “strategic solidarity with democratic partners” and “defending our values and interests together.”

Yet Scholz seems more sympathetic to the German businessmen who credit their country’s longest economic boom to its exports to China and who claim that continued prosperity depends on one of the biggest markets for German cars, machinery and chemicals. Last month, Scholz overruled many members of his cabinet in green-lighting Chinese investment in a port in Hamburg.

The problem for Germany, not to mention many less powerful countries, is that concrete economic interests have become harder to sacrifice to professed moral values at a time of crisis. The Green Party announced in their election program that they wanted to “end European arms exports to dictatorships, regimes that violate human rights and war zones with restrictive export controls”… But at a recent party conference, Baerbock was forced to justify exports of German arms to Saudi Arabia by invoking Germany’s economic interests.

Certainly, the ‘Alliance of Democracies’ proposed by Biden and Baerbock seems shaky. Globally, however, business lobbies and economic interests are very far from being subordinated to security imperatives defined in the Belt-Way. Lacking eager combatants in the West as well as the Global South, Biden may be doomed to a lonely battle.

Even hardline Sinophobes have had to acknowledge economic realities.

But it is not all the story…

“The Scholz caravan went to Beijing to lay down the preparatory steps for working out a peace deal with Russia, with China as privileged messenger,” insists prominent international observer Pepe Escobar.

Solid German business sources completely contradict the “message” delivered by the German Council on Foreign Relations on the trip to China.

According to these sources, the Scholz caravan went to Beijing to essentially lay down the preparatory steps for working out a peace deal with Russia, with China as privileged messenger.

Berlin and Moscow were keeping a secret communication back channel – via business interlocutors – right to the minute the usual suspects, in desperation, decided to blow up the Nord Streams. Cue to the now notorious SMS from Liz Truss’s iPhone to Little Tony Blinken, one minute after the explosions: “It’s done.”

There’s more: the Scholz caravan may be trying to start a long and convoluted process of eventually replacing the US with China as a key ally. One should never forget that the top BRI trade/connectivity terminal in the EU is Germany (the Ruhr valley).

According to one of the sources, “if this effort is successful, then Germany, China and Russia can ally themselves together and drive the US out of Europe.”

Scholz himself, one day before his caravan hit Beijing, stressed to Chinese media that Germany has no intention of decoupling from China, and there’s nothing to justify “the calls by some to isolate China.”

In parallel, Xi Jinping and the new Politburo are very much aware of the Kremlin position, reiterated again and again: we always remain open for negotiations, as long as Washington finally decides to talk about the end of unlimited NATO expansion drenched in Russophobia.

‘So could this all be the foundation stone of the Berlin-Moscow-Beijing trans-Eurasia geopolitical/geoeconomic corridor?’ puts the question Pepe Escobar.