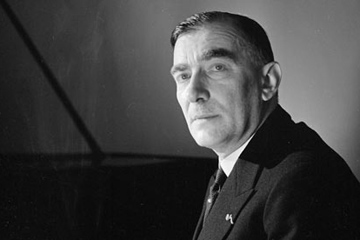 He is called the outstanding Polish composer of the twentieth century, and one of the most important to have created work after Chopin. Hailing from the remote province of Little Russia, half- Polish, half German, he went on to became the musical Olympus of Warsaw, where he arrived as a young man, enrolling at the local conservatory in 1901, and he remained gloriously renowned for many years.

Karol Szymanowski was born in 1882 in the Russian Empire, in the small village of Tymoshowka (now in the Cherkasy region of the Ukraine).  He lived for a long time in nearby Elisavetgrad (now Kirovograd), and from childhood he grew up in a creative atmosphere. It is enough to list his immediate family to realize that Karol could not choose a different path than the one to which he went. Karol's father was a cellist, his brother Felix was a pianist, his sister Stanislawa became a famous singer, and his youngest sister Zofia was a poet. Two of his uncles, Gustav Neuhaus and Felix Blumenfeld, were also outstanding musicians and teachers.

Felix Blumenfeld became a professor and Rector of the Kiev Conservatory in 1920, and from 1922 he was the Rector of the Moscow Conservatory. He was closely associated with Feodor Chaliapin, and Nikolai Rimsky- Korsakov.

Neuhaus once emigrated from Germany to Russia to work as a music teacher in the family of Princess Shikhmatova, then he turned to Elisavetgrad, where he established his own music school, among students of which were not only his son Henry and nephew Karol Szymanowski, but the poet and dramatist Jaroslav Ivashkevich (also related to the Szymanowski family) who in the future would become the chairman of the Union of Polish writers.

Having absorbed the creative energy of such distinguished personalities (for some of them annual music festivals dedicated to them are held in Kirovograd and there are commemorative plaques in their honor) and using their experience, Karol moved to Warsaw. It was the beginning of a long journey for this great man in the world of music.

The area of his activity was not limited to the capital city of Poland. Karol Szymanowski spent the years 1903-1904 in Berlin, and later traveled widely through Europe (Italy, UK, France), associating with musical Bohemians.

It seems that no twists or turns could distract him from his musical creativity. With the outbreak of the First World War Karol Szymanowski returned to his native Tymoshowka, where he worked hard, giving the world some wonderful works. After 1917, the Szymanowski family lost their estate. After that time, Karol did not visit Tymoshowka again. He twice visited the United States giving concerts met favorably by the public.

In the 1920s, he lived in Bydgoszcz (Bromberg in German), where the son of Szymanowski's daughter obtained a villa for them from among those that had been given up by local Germans who immigrated to Germany under the Versailles Treaty. Then he moved to the mountain resort of Zakopane in southern Poland. Karol Szymanowski’s former home is now a museum in Zakopane, and the town, despite its modest size (no more than 28,000 residents) can boast many famous residents: among them the children’s writer Kornel Makushinsky and the painter Vladimir Blocki.

In Zakopane, Karol Szymanowski studied Polish folklore, which in these parts has a number of distinctive features. Zakopane lies in the foothills of the Tatra Mountains and is inhabited by the so-called Goral people("Highlanders ").The  Goral have their own distinctive dialect, very colorful traditions and original folk music , which has had , at one time, an influence on Polish folk music. The Goral are a rather exotic group of people that is considered to be a sub-ethnic group of Poles. Even as overseas emigrants, the Goral stick together in clans , which distinguishes them from other Polish people , and acts like a magnet to attract thousands of foreign tourists to Zakopane .

In Polish culture there is even a special term - Zakopane style. It draws on the architectural motifs, and the folk traditions of the Polish Gorals. The artist and writer Stanislaw Witkiewicz (1851-1915) is considered to be the popularizer of the Zakopane style. It is thanks to his efforts that the Zakopane style found expression not only in architecture but also in the manufacture of porcelain, jewelry, musical instruments, furniture and even household items. Of course, Szymanowski, with his subtle creative flair could not but feel for this bottomless creative style. Szymanowski’s enthusiasm for folklore has influenced the works that he wrote during this period.

The Zakopane period of his life in the mid-1920s gave way to another spell in Warsaw. From 1927 to 1929, and then again from 1930 to 1933, Karol Szymanowski served as rector of the Warsaw Conservatory, the oldest higher musical education institution in Poland. He was offered an equivalent position in Egypt, where the climate would have been much more beneficial for him (Karol Szymanowski was suffering from tuberculosis), but he chose Warsaw, intending to raise a new generation of Polish composers, and he succeeded.

It is said that the opera “Rusalka” by Alexander Dargomyzhsky made a lasting impression on Karol Szymanowski, when he was still a child. After watching the opera, young Karol used to put on small plays on the occasion of family celebrations. He received no less impressions from the works of Igor Stravinsky (the "Petrushka" ballet), which he was introduced to in 1913, when he was already a mature professional.

As a composer Szymanowski did not concentrate his work solely in the Western musical tradition, but was also fond of the East. Traveling once in North Africa, Szymanowski was fascinated by the mystique of the Muslim East. This is not to say that he brought Arabic motifs into his works. To Szymanowski the East was, above all, a historical and romantic mystery. In addition to the East, Szymanowski always retained nostalgic memories of the nature of the music of Little Russia, although the melodies of Little Russia are never heard in his music.

The merits of Szymanowski’s work were recognized by his contemporaries during his lifetime. In 1934 he was awarded the Commander's Cross of the Order of Polonia Restituta, and in the year of his death, the president of Poland Ignacy Mościcki awarded the composer the Order of Merit of the Republic of Poland posthumously.

Szymanowski was buried in the Pantheon of the greatest Poles in Krakow (a tomb he deserved) in the Church of the Pauline monks, but his heart was buried in Warsaw, in the chapel of the nuns of the Society of the Sacred Heart of Jesus. In 1944, during the Warsaw Uprising, the chapel burned down together with all of its contents.

2007 was declared the Year of Szymanowski in Poland, and in his native land, the former Elisavetgrad, a series of memorable musical events were held,  which since then have become a commendable tradition.