Sensationalism over Diplomacy: The buzz around India Russia Annual Summit 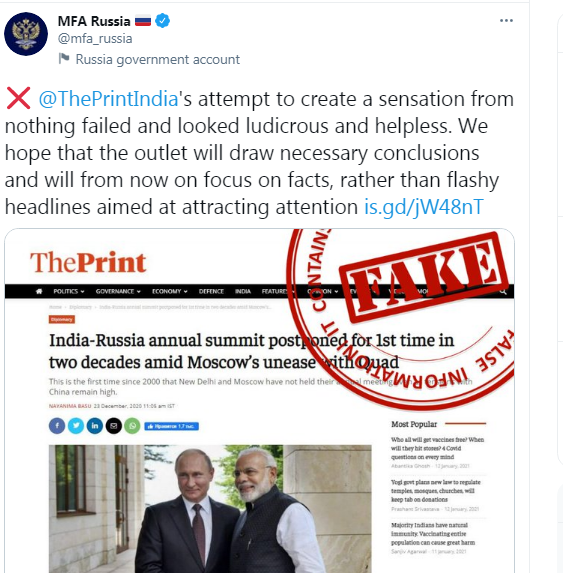 India and Russia (erstwhile Soviet Union) have known to maintain cordial relations since post World War II. The Nehruvian Era was all about Fabian socialism and the planned economy model implemented in a manner to closely follow the Russians. Even in contemporary times, Indo-Russia relations have been a close highlight of friendship, trade and defence. However, this bilateralism created a buzz when an article printed in the Indian media was deemed to be ‘fake’ after the Russian Foreign Ministry tweeted about it.

The intricacies of matter find themselves around the Annual Summit which is a joint dialogue exchanged between the two countries as part of Joint Declaration on the India-Russia Strategic Partnership (later updated to Special and Privileged Partnership). The agreement was signed in 2000 and since then both the countries have maintained it thoroughly without any compromise. But things appeared to be not so straightforward when news around postponement of the Annual Summit surfaced.

On 23rd December 2020, The Print, an Indian media outlet published an article which questioned Moscow’s relations with New Delhi over the partnership of QUAD countries. The article clearly stated, “For the first time in the last two decades, India and Russia have not held their annual summit. This comes after Moscow expressed severe reservations on New Delhi joining the Indo-Pacific initiative and Quad, thereby tilting more towards the US.” The article also pointed out that the postponement of the Annual Summit could cost India a heavy price as China has been increasing its presence in South Asia.

The article further mentioned of concerns being raised in the Indo-Pacific region and quoted former Indian Ambassador to Russia Ashok Sajjanhar. He mentioned that the two countries failed to organize a meeting virtually whereas back in 2014, during the Ukrainian crisis, Russian President Vladimir Putin had visited India only for a few hours. This statement further aggravated to highlight the underlying contention shared between India and Russia. Much to the speculations that went around, the hatchet was buried as an official press release from the Ministry of External Affairs was issued. In a press release conducted by the Spokesperson of MEA himself, Anurag Srivastava mentioned, “The India-Russia Annual Summit did not take place in 2020 because of the COVID Pandemic. Any imputation otherwise is false and misleading. Spreading false stories on important relationships is particularly irresponsible.”

As a response to the MEA’s press release, Russian Ambassador to India, Nikolay Kudashev issued a statement reiterating that the postponement was an outcome of a mutual decision taken between the two countries and that it's working towards organizing new dates for Annual Meet. He assured that despite the challenges posed by COVID-19, the preparation for Annual Summit is underway.

Amidst all the buzz, the Russian Foreign Ministry tweeted on this article exactly a month after it was published.

The tweet made on 23rd January 2021 accused ‘The Print’ of sensationalism and called for necessary actions for such ‘helpless’ news pieces. The underpinning question that certainly raises a doubt is why sensationalism over strategic partnership? Indo-Russia relations have also been closely linked to defence. The uncountable defence deals shared between them exemplifies a strategic partner in the East European and South Asian region.

Highly sophisticated S-400 sale and Indian defence market are equally important for Russia. President Putin is heavily invested in Indo-Russian relations and indeed shaped it further after the fall of the Berlin wall. Any unfounded and uninformed conclusions lead to avoidable reporting. Sensationalism is avoidable when we discuss issues of strategic importance.