Serbia and EU: no more illusions 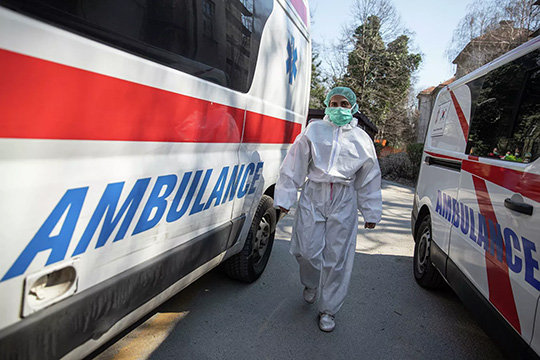 The current coronavirus pandemic in Europe threatens to damage the image of the EU in the eyes of residents of both EU member countries and countries seeking the EU membership.  Given this, a good example has been  demonstrated by the Serbian leadership, which initially pronounced integration with the EU as a top foreign policy priority but had to consider a whole range of factors that had a negative influence on such plans. Unlike recently, when these factors included  western support of self-proclaimed autonomy of Kosovo and Belgrade’s (and Washington’s) demand that Belgrade should curtail economic and military cooperation with Russia, in the past two months Serbs’ growing  discontent with the European Union come from lack of appropriate assistance in the fight against the COVID-19 pandemic.

According to Serbian authorities, the financial and medical assistance from corresponding EU agencies provide insufficient. Serbian Foreign Minister Ivica Dacic said on April 10that even though Serbia was grateful to the EU for assistance it received in connection with coronavirus, Belgrade had expected this assistance  to be more substantial and to be delivered faster.   “The European Union sent exactly as much assistance to Serbia as it could allocate at that moment, for which we are grateful. But to be honest, we expected more and faster, ” - Serbian Foreign Minister said in an interview with the Belgrade-based Vecernje Novosti.

Serbia, he said, being a candidate for the EU membership, has numerous commitments to Brussels that it fulfills and therefore has every right to expect from the EU to treat it as a full member in times of crisis. Ivica Dacic emphasized: “Our policy towards the European Union has not changed - for us membership in the EU is still a priority, since it meets the interests of Serbia. But after this crisis, there will come a period of reconsidering EU functions. This will be done by many EU countries, and Serbia will follow suit as well, as a country interested in securing a better EU performance in the future. ” [1]

Serbia points out that while the EU leadership and its affiliated agencies chose to confine themselves mainly to promises, other countries, and, above all, Russia, supplied it with much-needed relief assistance. EU chief negotiator for Serbia, Sam Fabrizi, said earlier that the EU plans to distribute 200 million euros from the candidate countries support fund to help the Serbian economy. According to available information, this statement has already triggered an angry reaction from other Balkan hopefuls, claiming both the EU membership and the EU funds. This means that the sum suggested by the EU diplomat can be cut in the course of further consultations with all parties concerned in Brussels.

Serbia appreciates the assistance provided by Russia. Russian military personnel that were sent to Serbia quickly got down to work consulting patients with suspected coronavirus infection in Belgrade and Valevo. In addition, according to the Russian Foreign Ministry, five more medical teams went to work in the cities of Chupria, Novi Pazar, Cacak, Leskovac and Kragujevac. [2]

Also, Russian specialists from the radiation, chemical and biological defense forces are helping with the disinfection of a military camp in the city of Bachka Pola, where coronavirus cases were reported among Serbian military personnel. [3]

The Serbian government turned to Russia for help on March 27, as part of a bilateral agreement on cooperation in emergency humanitarian assistance. On April 4, 11 Ilyushin-76 military transport aircraft delivered to Serbia 87 military specialists, medical equipment, disinfectants and protective masks. [4]

Serbia is not the only Balkan country that has received emergency assistance from Russia to effectively handle the coronavirus pandemic. A Russian brigade  of 24 servicemen and five units of military and special equipment was flown to Banja Luka by three Ilyushin-76 flights on orders from Russian President Vladimir Putin following a request from the government of the Republika Srpska, which is part of Bosnia and Herzegovina.

The effective assistance provided to Serbia and other Balkan countries by Russia, and also by China, did not go unnoticed in the West. The British newspaper The Guardian has described what is happening as “coronavirus diplomacy” executed by Moscow, Beijing and Brussels. [6]

The newspaper also cites Serbian President Aleksandar Vučić, who made a statement in response to a ban on medical supplies from the EU that “European solidarity does not exist any longer.” “This was not exactly what we expected to hear from a government which claims to be doing everything possible for membership in the EU,” - said a European diplomat based in Belgrade. Even Spain and Italy have been angered by the absence of a coordinated European response to coronavirus, while for those outside the bloc, such as Serbia, the refusal was felt even stronger, ” - The Guardian points out. [7]

What is essential is that the Serbian media too view the problem in a wider context, pointing out the need for the European Union in this situation, firstly, to take a more independent stance in world affairs, and secondly, to take a move towards normalizing relations with Russia . As the Belgrade-based Politika writes in this regard, “the EU is trying to reorganize itself, free itself from the influence that the United States imposed on it back in 1957, when the European Economic Community was founded. The EU is trying to turn in the direction of other partners who offer cheaper and higher-quality products, as well as their open markets. In all respects, Russia's role in this process remains one of the key ones. ” [8]

The above circumstances make it possible to predict certain changes in the alignment of forces both within the European Union itself and on the European continent as a whole after the coronavirus pandemic is over. This will  manifest itself, firstly, in the intensification of attempts by leading EU countries and politicians to boost the effectiveness of EU institutions, and secondly, in Russia's greater authority and attractiveness in the eyes of the European public. This, in turn, will create more opportunities for Moscow to strengthen cooperation with its partners both in the Balkans and in Europe as a whole.