Serbia bracing up for “difficult autumn“ 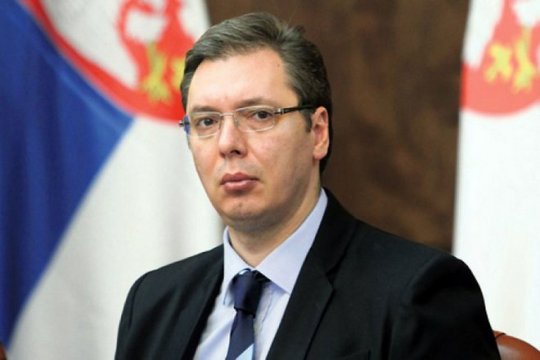 Serbia is preparing for a “difficult autumn” as it tries to resolve the Kosovo problem, President Aleksandar Vucic said following a visit to the United States. He described the discussions he had had in Washington as “extremely important,” all the more so amid the continuing disagreements over the situation in Kosovo.

“A difficult autumn awaits us, a difficult winter awaits us. First and foremost because of Kosovo,” Vucic said. Pledging continued fight for Serbia and the ethnic Serbs living in Kosovo, he still admitted that Serbia is too small to influence the policies of a “giant” like the United States. Aleksandar Vucic, Kosovo leader Hashim Thaci, French President Emmanuel Macron, German Chancellor Angela Merkel and possibly a senior member of the Trump administration are expected to meet in Paris later this month to discuss the situation in Kosovo. The participants are expected to agree a list of measures to normalize relations between Belgrade and Pristina, including provisions for redrawing Kosovo borders and the transfer of the country’s Serb-populated northern regions to Serbian control. The Serbian opposition strongly rejects the idea of signing such an agreement with Pristina under the auspices of the European Union and the United States.

President Vucic may still be forced to go for it as “the lesser evil,” which may require a certain degree of pragmatism on Russia’s part. According to the new Russian ambassador in Belgrade, Alexander Botsan-Harchenko, who formerly represented Russia in the mediating “troika” overseeing the Kosovo status talks, Moscow “supports and encourages everything regarding the initiative role of Belgrade. If some decisions are made, and if Serbia asks Russia to join a certain group of states, then we can (why not) go for it. But at the same time, our position and our commitment to Resolution 1244 must be taken into account. There is no other option for us and, I think, for Serbia either. We are now ready to contribute to the resumption of dialogue. ” [1]

Serbia’s other option is refusal to continue negotiations with Kosovo and, therefore, to see its application for EU membership suspended. This is a possibility many in Europe and the US are fully aware of.

“The Serbian point of view is that Russia defended its position on Kosovo in the UN and opposed NATO bombings,” former US ambassador to Belgrade, William Montgomery, said, adding that, according to opinion polls, Russia still tops the list of countries Serbians like most.

He described the EU’s position on Serbia’s membership in the bloc as short-sighted and a strategic mistake, emphasizing that the European Union will bear responsibility for the consequences of its failure to do more to bring Serbia into the bloc. [2]

Serbian officials are equally aware of the complexity of the situation. In an interview with the Belgrade-based newspaper Vecernje novosti, diplomat Zoran Milivojevic expects a clash of “big power” interests in the Balkan region: “Serbia clearly occupies an important place in this standoff and will continue doing so since the West has not yet abandoned its interests in this region. Because Serbia plays such a decisive role in the Balkans, it will be the primary target of Western pressure.” [3]

If Serbia rejects a deal with Kosovo, thus complicating its relations with Brussels, it will inevitably have to generally revise its foreign policy priorities and start to actively build up across-the-board cooperation with Russia and other global “centers of power” outside the Euro-Atlantic camp. This also implies closer trade and other economic ties with Russia and its Eurasian allies.

One such cooperation format is the Eurasian Economic Union (EAEU), which can offer Belgrade a serious trade and economic alternative to European integration, while simultaneously allowing Serbia to serve as a “bridge” in the economic (and, therefore, political) relations between Russia and the West.

Meanwhile, Belgrade is already taking concrete steps in this direction. On August 15, Serbia officially joined the Asian Infrastructure Investment Bank (AIIB) as its 73rd member with the country’s finance minister Sinisa Mali describing this as an important event, which offers Serbia access to easy loans to finance the implementation of priority projects.

In addition to members from the Asia-Pacific region, the Beijing-headquartered AIIB, which has been operating since 2016, also has among its members such leading European countries as Britain, Germany, France, Italy, the Netherlands and Spain. [4]

In October, Serbia may sign an even more economically and politically significant agreement on a free trade zone with EAEU member-countries. According Russia’s envoy in Belgrade, Alexander Botsan-Kharchenko, such an agreement is expected to be inked on October 25.

“This is a significant event, which has naturally attracted a lot of media attention. The EAEU is an effective integration project that meets modern requirements. For Belgrade, the implementation of the document will mark a completely new stage of presence in Eurasia, with an access to a market of over 182 million consumers and a combined GDP exceeding $1.9 trillion,” Botsan-Kharchenko emphasized, adding that “Serbia may eventually become a bridge between the EU and the EAEU.” [5]

Established on the basis of the Customs Union and the Common Economic Space, the Eurasian Economic Union has been in business since January 1, 2015 and currently includes Armenia, Belarus, Kazakhstan, Russia and Kyrgyzstan, with Moldova having an observer status. [6]

During the August 2019 meeting by the Eurasian Intergovernmental Council  Russia’s Prime Minister Dmitry Medvedev emphasized the need to speed up the preparation of agreements on the EAEU free trade zone with Serbia and Singapore. He also called for expediting the implementation of integration processes within the EAEU itself. [7]

“Negotiations on free trade are successfully underway with Singapore, Israel, Egypt, and an interim agreement on a free trade zone with Iran, an agreement on trade and economic cooperation with China will soon be launched. This gives our goods certain advantages in these countries’ markets," Medvedev said.  He emphasized that the EAEU also seeks to expand the number of its foreign partners, including through regional organizations such as ASEAN.

"We strongly support such activities. I think that it is necessary to expedite the procedures that are necessary to sign agreements on a free trade zone with Serbia and Singapore," Medvedev added. [8]

In addition to the EAEU, Serbia has spent the past few years trying to participate more actively in other integration projects outside the Euro-Atlantic area. Since 2013, it has had an observer status at the Parliamentary Assembly of the Collective Security Treaty Organization, and, according to various reports, is now mulling the prospect of its gradual “connection” to the structures of the Shanghai Cooperation Organization. Increased US and EU pressure on Belgrade concerning the issue of Kosovo recognition will obviously give an additional boost to the abovementioned trend, which objectively meets the interests of the Russian Federation.