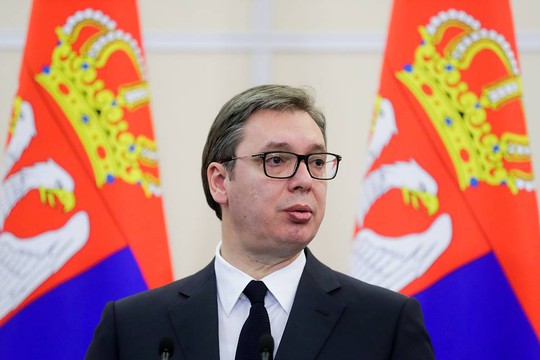 Western states make it clear that they will not agree with the change of Ukraine's borders, but they themselves are involved in redrawing the map of Serbia, insisting on the independence of Kosovo. Serbian President Aleksandar Vučić announced this on the air of the Prva TV channel.

“They (the West) say that they will never accept any change in the borders of Ukraine (as a possible result of a Russian special  military operation). Instead, they will participate in the destruction of Serbia's national sovereignty and tell us about Kosovo as the "heart of Europe" and a separate country," - the Serbian president said. "Think of the nonsense you (Western countries) are saying and how hypocritical you are," Vučić added.

Back in February 2008, the Serbian Autonomous Province of Kosovo and Metohija unilaterally declared independence and has recently been actively trying to join international organizations, including UNESCO and Interpol. More than 60 countries, including Russia, India and China, as well as five EU member states oppose the recognition of Kosovo. In this regard, Vucic pointed out that the recognition of the self-proclaimed Kosovo was recently withdrawn by another four countries, and Serbia continues to work in this direction.

Vucic also assured that Serbia would resist the imposition of sanctions against Russia, since the issue of anti-Russian sanctions is related to the price of gas and energy resources, and the Serbian economy is 100% dependent on gas from the Russian Federation. “We endure terribly much without imposing sanctions against the Russian Federation, but we do this because we are an independent country,”-  the president explained. According to him in this case Serbia pursues its own interests.

Earlier, in an address to the nation following a meeting of the Security Council he said that Serbia supports the territorial integrity of Ukraine, but will not impose sanctions against the Russian Federation. Militarily, Serbia will remain a neutral country, despite the fact that it is surrounded by NATO member countries, Vučić also noted. And in order to strengthen the security of the state and patriotic education of young people, he proposed to return compulsory military service for a period of 90 days.

Prior to this the President of Serbia said that rational politicians in Europe, including Germany and Austria, understand that they are “shooting themselves in the foot” by banning oil and gas supplies from Russia.

Serbia is indeed in a difficult situation being surrounded by EU and NATO countries. It must be admitted that aggressive attitude towards any dissent to the western common position is not uncommon. For example, the European Parliament recently threatened Turkey with isolation if it does not support the entry of Finland and Sweden into NATO.  Western politicians do not pay attention to the fact that Ankara has good reasons to oppose this. In particular, Sweden and Finland actively and openly support the organization that is recognized as a terrorist one in Turkey.