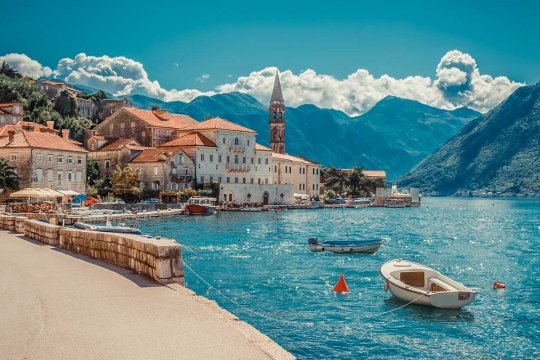 On August 5, 1999 the government of Montenegro announced a platform for new relations between Serbia and Montenegro, in order to review the status of Montenegro and electoral law. The Constitutional Court rejected this revision as being illegal. A little later, the question of Montenegrin independence was again raised – this time with the support of the European Union and the US administration. Montenegrin government has pursued a policy that has encouraged pro-independence policy, which resulted in the separation of Montenegro from Serbia in 2006. Montenegrin Serbs have been strong advocates of a joint state with Serbia, however, they were outvoted. And then at the referendum, the majority of the Orthodox population was for a common state with Serbia, but ruling Democratic Party of Socialists, along with national minorities, managed to win majority. Many analysts expected that in future the absolute majority of citizens will be loyal to independent Montenegro, and that ethnic Montenegrins would make more than half of the population. However, the situation is completely different. Montenegro today is a deeply divided state. Montenegrin Serbs still do not accept the results of the referendum. They consider and publicly point out that the referendum was undemocratic with many irregularities. According to the 2011 census, Montenegrins make 44.98% of the population, Serbs 28.73%, Bosnians 8.65%, Albanians 4.91%, Muslims 3.31%, Roma 1.01%, and Croats 0.97%. It is important to point out that the citizens were pressured to declare themselves as Montenegrins. Otherwise, the Serbs would be an absolute majority in Montenegro. The goal of the Montenegrin government is that Montenegrins are an absolute majority in the state, and this plan is implemented even before separation from Serbia. According to the census of 2003 year, 63.49% of the population said that they speak Serbian language, but Montenegrin government decided in 2004 to rename Serbian language. To that end, Montenegro has copmletely changed school programs. The Cyrillic alphabet is almost completely out of use, and almost all state correspondence is in Latin alphabet , Serbian poets were thrown out of school textbooks. Already on the 2011 census 42.88% of the population said that they speak Serbian language. Serbian National Council of Montenegro, in September this year, stated:

“The authority in Montenegro, in a coalition with minority nations, has stopped every prospect for citizens who declare themselves nationally as Serbs. In all spheres of social and political life she opposed, especially Bosniaks and Albanians, to the Serbs, discriminating all Serbs who are not ready to change their own identity in the already obvious project of the assimilation of the Serbian people in the national Montenegrins". Discrimination against Serbs, is best illustrated by the statistics. In the last four years, in Montenegro, on average, only 13 Serbs received a state job annually. This is 37 times less than the number of Montenegrins, since the state institutions annually employed on average 486 citizens who declared themselves as Montenegrins. The average number of employed Serbs is smaller even when compared with Bosniaks. According to official statistics, 82.11% of Montenegrins work in public administration, and only 7% of Serbs. All this is done with the aim that the Montenegrin Serbs are no longer a significant demographic and political factor in Montenegro. Basically, Montenegrin Serbs are the main opponents of Milo Djukanovic and the Democratic Party of Socialists. It is important to note that the Democratic Party of Socialists is the ruling political party in Montenegro since the introduction of multy - party system in 1990. The main political goals of Montenegrin Serbs are, one state with Serbia and brotherly relations with Russia. It is precisely for this reason that the West is silent on the discrimination of the Serbs.

Montenegrin Serbs were the main opponents of Montenegro's entry into NATO. One of the main reasons for that is NATO's aggression against Serbia and Montenegro, as well as Russia's position that NATO expansion is dangerous and unnecessary. NATO aggression on Serbia and Montenegro, began 19 years ago. Aggression started without the approval of the UN Security Council. The attacks that lasted without interruption for 78 days severly damaged infratucture, commercial buildings, schools, health facilities, media houses, cultural monuments. The cost of the damage is estimated between 30 and 100 billion dollars. The final number of victims has not been officially declared, but Serbian estimates range between 1, 200 and 2, 500 dead and about 5, 000 injured.

From the above reasons and facts, Montenegrin government avoided the referendum on NATO, because most of the population was against the entry into NATO. The decision on entry into NATO was taken in the Parliament. By entering Montenegro into NATO, the West achieved a significant geopolitical victory. The territory of Montenegro has important geo – strategic signifance. It has access to the Adriatic Sea, controls the Strait of Otranto. From Montenegro, NATO will have an even stronger impact on the Raska (Sandzak) region in Serbia, northern Kosovo, as well as in eastern Republic of Srpska.

In Montenegro, for years there is a project of changing the traditional Serbian/Slavic – Orthodox identity into Montenegrin, Roman Catholic and Western identity. That is why Russia is also the target of the Montenegrin authorities.

“The Serbian Orthodox Church remains the main frontman of Greater Serbian nationalism towards the region and Montenegro, the striking fist of what ideologues of “big Serbia” and imperial Russia in the Balkans want, and must remain the subject of Montenegro‘s state policy in the coming period”, stated Milo Djukanovic, president of Montenegro. Djukanovic publicly also stated that Montenegro wants to change its “ civilization circle”. And in new” civilization circle”, except Serbia, there is no place neither for Russia. On this statement every analyst who deals with situation in Montenegro should pay attention. Under the rule of Milo Djukanovic and his Democratic Party of Socialists, began an open revision of official history. And among the revision are also the relations between Russia and Montenegro throughout history. Regarding Russian-Montenegrin relations, history is clear. The first instance of official Russian – Montenegrin diplomatic contact was made in 1711, when Russian Tsar Peter the Great sent his envoys to “duke of Serb land” Metropolitan Danilo. Since then, Russia has always helped Montenegro and the Serbs. It is precisely because of this help through centuries that  in Montenegro there is a pro – Russian cult. Russia has for centuries been the protector of Montenegro, and played a key role in helping Montenegro remove the Ottoman Empire. The people of Montenegro remember that and are very grateful to Russia. As a result of that, there is the term  in Montenegro ”Mother Russia”. However, today Montenegro's foreign policy is being adapted to the private interests of Milo Djukanovic and his Democratic Party of Socialists. This could be seen on the marking of the establishment of 140th anniversary of diplomatic relations between Montenegro and the United Kingdom, in June this year. Than, in old royal capital Cetinje,  president of Montenegro Milo Djukanovic stated:

“We do not forget that London was among the first to support twenty years ago the democratic turn and the European course of Montenegro. At that time, the British Know How Fund and the British Council played a particularly important role. But also the Government of Great Britain, with its decisive and comprehensive support ... Time has shown that the struggle of our English admirers and friends for Montenegro in the twenties of the last century was not futile. The United Kingdom has strongly supported Montenegro in the process of joining NATO, where we again are allies.” When it comes to Montenegrin-British relations, history is clear. Within the so-called Eastern Question, which stretched from the end of the 18th century to the beginning of the First World War, and which in essence signified the global conflict of the West against Russia, the essence was not to allow Russia to get out to the warm sea. First via the Bosporus and Dardanelles Straits, and later at any point in the Mediterranean that would be available to Russia. At the same time, Britain and the West always considered Serbs (and under the Serbs should not only be regarded the Serbs from Serbia) as the “Balkan Russians” or “little Russians”. Knowing that besides Bosphorus, Russia could only get to the Mediterranean via the Serbian-Adriatic Sea, Britain in the wish to neutralize Russia's aspirations, from the late 18th century practically conserved the Ottoman state and did not allow her ruin almost to the beginning of the 20th century, which significantly prolonged the occupation of the Balkans by Ottomans. The current British policy towards Montenegro is based on the disabling of any Russian influence. Britain will help Djukanovic until this regime carry out unquestionably anti-Russian policy. That's what is happening now.

Serbia and Russia should jointly respond to this policy, and stand in protection of Serbian Orthodox Church and Serbs in Montenegro. This is primarily reflected in the insistence on the recognition of fundamental rights, which are guaranteed by the Constitution of Montenegro. Russia has all the preconditions for the development of soft power in Montenegro. Regarding the soft power of Russia in Montenegro, progress is notable but not enough. A special accent should be placed on the Russian - Montenegrin historical links, and in this regard, scientific conferences should be organized in which Russian and Montenegrin historians would remind the people of Montenegro, as well as the intellectual community, for all the assistance Russia has provided to Montenegro over the centuries. And  therefore send a clear message that it will not allow revision of history. Also, it would be wisely that serious Russian investments come to Montenegro. The largest number of foreign tourists in Montenegro are Russians. In accordance with that, Russian investments in Montenegrin tourism should be significantly increased. In Montenegro, all TV news stations are pro – Western, as well as almost all daily newspapers. Brainwashing in Montenegro is performed on a daily basis. Montenegro urgently needs pro – Russian television, which would make the media scene of Montenegro more balanced. In this way, Russia would clearly position itself in Montenegro and help resolve the Serbian question, but also would satisfied its interests in this small, but strategically important Balkan country.