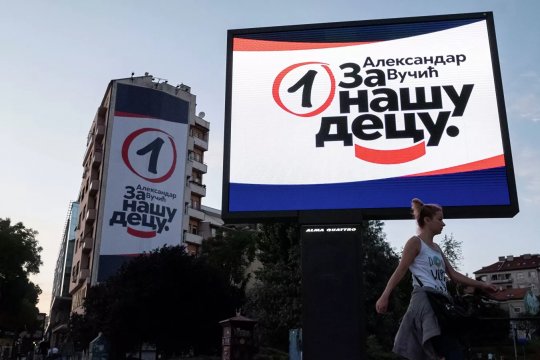 The convincing victory secured by the ruling Serbian Progressive Party at parliamentary elections on June 21st signifies stabilization of political situation in Serbia and further development of comprehensive cooperation with Russia. The Serbian opposition of both nationalistic and pro-Western orientation chose to boycott the vote.  As a result, only the Serbian Radical Party participated in the elections from the opposition. However, according to the Serbian Election Commission, the 1,58% of votes gained by opposition supporters de facto became a final judgement on Vojislav Šešelj’s brainchild. Boycott supporters failed to put under question the legitimacy of the ruling coalition.

Under preliminary reports of the Central Election Commission, the Serbian  Progressive Party, backed by President Aleksandar Vucic, received 63,35% of the votes, thereby radically improving the previous outcome (about 50%). Coming second in the race is the Socialist Party of Serbia, which is run by First Vice-Premier and Foreign Minister Ivica Dacic (10,62%).

«Today we won public trust, the most significant public trust in the history of Serbia, in the conditions when few believed in it. We received a serious warning from the people that we must be more responsible and more hardworking», - President Vucic commented saying that the victory of the Progressive Party was «impressive and convincing». [1]

Apparently, the convincing victory of a pro-presidential party is beneficial for Russia – it enables it to strengthen its positions in the Balkans and foster Serbian-Russian relations, including in the context of cooperation on the issue of Kosovo. A few days before the vote the problem of Kosovo was discussed in a telephone conversation by the presidents of the two countries, which took place at the initiative of Aleksandar Vucic. The two leaders spoke positively of the high level of Russia-Serbia strategic partnership. About Kosovo, which is on the agenda of Aleksandar Vucic’s talks with Pristina leaders due to take within the next few days, Russian President Vladimir Putin has called for working out a compromise which would be acceptable for Belgrade and which would be endorsed by the UN Security Council. [2]

Similar statements were made by Russian Foreign Minister Sergei Lavrov at talks in Belgrade on June 18. Addressing a joint news conference with Aleksandar Vucic, the Russian foreign minister described present-day bilateral relations as a “strategic partnership” reminding everyone that trade between Russia and Serbia in 2019 amounted to over 2.5 billion dollars, demonstrating a more than 22% growth.

Sergei Lavrov pointed out that the Russian position on the issue of Kosovo, which was yet to be settled, remained intact: «We reaffirm that we will continue to support any efforts, steps or initiatives that could help Belgrade and Pristina to achieve a viable and mutually acceptable solution on the basis of Resolution 1244 of the UN Security Council». The Russian minister cited President Putin as saying that Moscow would accept «only a decision that would suit Serbs, who are struggling to defend their legitimate rights and interests in Kosovo». [3]

In the opinion of Moscow and Belgrade, it’s UN  Security Council Resolution 1244 of June 10, 1999 that continues to play «a fundamental role in Kosovo settlement». It is on the basis of this resolution that the parties involved can come to a compromise, Sergei Lavrov said following negotiations with his Serbian counterpart Ivica Dacic. The Russian foreign minister expressed «support for Serbian leaders’ policy of building constructive neighborly relations with all countries of the Balkan Region». «We think highly about Belgrade’s efforts to maintain peace and stability in this important part of the European continent», - Sergei Lavrov said. [4]

A powerful support of voters is particularly crucial for President Vucic and the ruling coalition in Serbia in the light of the forthcoming resumption of talks between Belgrade and Pristina on the principles of normalizing bilateral relations. An ultimatum-style pressure from the West stands a key problem in Belgrade’s foreign policy priorities. However, Serbia may well face extra opportunities for dialogue within the next few months. Aleksandar Vucic has given it to understand that he will refuse to recognize Kosovo’s independence and discard the objections to its acceptance in the UN in exchange for Serbia’s membership in the European Union, thereby reiterating readiness for broader compromises, including in the context of the division of Kosovo  and  exchange of territories with  Serb and  Albanian population which has been on the agenda of the talks in the  past two years.

Playing into Belgrade’s hand is the fact that differences on the above-mentioned issues within the ranks of western community persist. Bulgaria’s Dnevnik points out that «on the one hand, the EU has made it clear that without normalization with Kosovo Serbia will not be able to join the EU, which it has been seeking for eight years as an official candidate. On the other hand, Serbian  politicians have been using the word “normalization” only in the past few years, since they started talking about a disputable deal on the exchange of territories – Vucic and Thaci, along with the USA, are in favor, while Europe has yet to come to consensus on it». [5]

Negotiations on  Kosovo settlement, due to get under way in Washington at the end of June, promise to be difficult.. Speaking at a news conference on June 22 President of self-declared Republic of Kosovo Hashim Thaci expressed hope that these  negotiations would open a new chapter in a settlement process between Belgrade and Pristina but the dialogue, he said, was going to be difficult. [6]

Given the circumstances, Russia is interested in achieving the following:

Firstly, any agreements that will be reached in Washington must, without fail, become a subject of discussion by the UN Security Council – this will make it possible for Russia to render the  necessary legal assistance to Serbia and  secure a consensus from leading powers. This, in turn, will mark an important step towards implementing the idea of holding a summit of five permanent members of the UN Security Council on key global issues. A statement to this effect was made by Russia’s President Vladimir Putin a few days ago.

Secondly, a would-be solution should  take into  account the interests of both Serbia and Kosovo Serbs – only in this case it will  be a long-term settlement which will stabilize the situation in the Balkans. This will enable Russia to pursue its projects in the region, including in the energy sector, with the participation of Kosovo and Albania, as well as Kosovo Serbs and Bosnian Serbska Republic.

Thirdly, normalization of relations between Belgrade and Pristina will make it possible for Serbia to actively position itself on the international scene and become a kind of “bridge” in establishing cooperation between Russia and the EU.