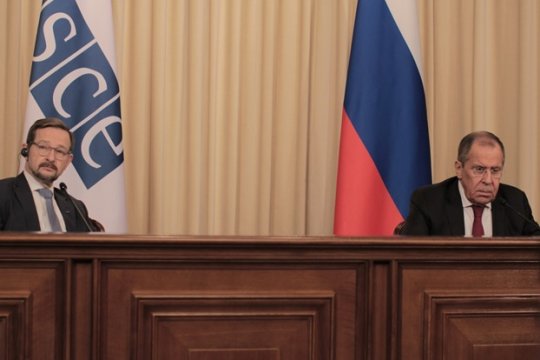 Following talks with OSCE Secretary General Thomas Greminger, Russian Foreign Minister Sergey Lavrov emphasized Moscow’s firm belief in the Organization’s unification potential and the need to strengthen its authority. Lavrov also said that Russia wants to see security cooperation not only between OSCE members, but between regional organizations as well.

Thomas Greminger sees the OSCE as a key platform for dialogue, which he believes is the fundamental mission of the 57-member regional security organization, where problems are discussed not only at the level of political, but also defense experts, as contacts between the Russian and NATO militaries were put on ice five years ago. Sergey Lavrov, for his part, believes that the OSCE’s goal is to build "a community of comprehensive, cooperation-based and indivisible security in the Euro-Atlantic area and Eurasia." This also resonates with the idea of a Great Eurasian Partnership, proposed by Russia. Sergey Lavrov believes it imperative to enshrine in the Charter for European Security and the Security Platform, adopted at the OSCE summit in 1999, the principles of indivisibility of security and cooperation not only of countries, but also of organizations.

"With the political will of the participating countries, the OSCE can make a meaningful contribution to the labor-intensive and stuttering  process of restoring confidence in the Euro-Atlantic area" (Sergey Lavrov)

Thomas Greminger called for confidence-building measures, including in the field of conventional arms control. He emphasized that he had mentioned this need also during his last week’s official visit to Washington.

"We are really going through hard times, but this year we have achieved certain successes, and this progress is possible only if there is political will and sincere dialogue," Greminger said, in a clear reference to talks in Bratislava and the separation of forces in the Donetsk and Lugansk regions of Ukraine. Sergey Lavrov praised the OSCE’s contribution to the peaceful resolution of the Transdniestrian conflict. Speaking about Ukraine, he noted that despite the signing of the Steinmeier formula, many loose ends still need to be tied up, including a complete separation of forces in Donbass, an amnesty, a resumption of economic ties, lifting the blockade, granting special status to parts of Donetsk and Lugansk regions, and enshrining all this in the Ukrainian constitution.

“We should use the election of a new [Ukrainian] president and the formation of a new government.” (Thomas Greminger)

Sergey Lavrov also mentioned the OSCE’s unrealized potential, including a declaration on countering Islamophobia and Christianophobia, which the OSCE members have failed to adopt in the course of the past five years.  There has been no progress on the project concerning the protection of the language, educational and other rights of ethnic minorities either. Lavrov also emphasized the importance of anti-terrorism, combating drug trafficking and ensuring free access to information for the public and the media. Russia will propose draft decisions to address these issues at the upcoming meeting by the OSCE Foreign Ministers’ Council in Bratislava, as well as a draft declaration dedicated to the 75th anniversary of the end of World War II. Sergey Lavrov called for taking into account Russia's and other countries’ interest in the work being done by the OSCE, arguing that this organization can function properly only on the basis of consensus.

“We hold in very high regard the role, which the Organization has been playing in the Geneva discussions on stability in the Trans-Caucasus region.” (SergeyLavrov)