Sergey Lavrov: We are not joining NATO, mind you! 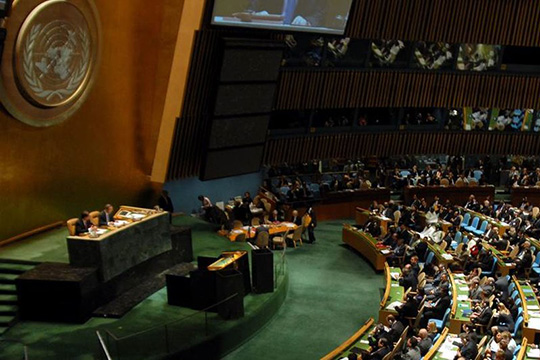 Russia and NATO are long-standing antagonists, even though the possibility of our country's accession to the North Atlantic Alliance was raised back in the days of President Clinton. Before that, the Soviet Union proposed the same in a note to that effect in 1954. Is genuine partnership possible now when NATO is expanding eastward and conducting large-scale exercises on our western borders, and the Alliance's military spending has been on the rise for several years in a row?

The aggregate defence budget of the 29 NATO member countries amounted to almost $946 billion in 2017, while the US alone, which calls the shots in the Alliance, spent $683.4 billion on defence.

During the NATO summit held on July 11, 2018, Donald Trump demanded that all NATO members raise their defence spending to the required 2 percent of GDP immediately, not by 2024, as NATO countries previously agreed.

Before Sergey Lavrov and NATO Secretary General Jens Stoltenberg’s meeting as part of the UN General Assembly, dozens of journalists gathered outside the Russian delegation’s reception room. Sergey Lavrov was the first one to approach them and greeted the reporters with a joke, noting the general excitement, “All sold out! We are not joining NATO, mind you!”

Lavrov and Stoltenberg are discussing the potential creation of a US base in Poland behind closed doors. Earlier, Politico reported that Warsaw asked the United States to build a permanent military base and said it was willing to allocate up to $2 billion to this end. This request must be reviewed by the US Congress.

Jens Stoltenberg noted that Russia and NATO have major differences, such as with regard to Ukraine, which adds even more importance to meetings and discussions. Most important now is not to lose contact. Thus, NATO Secretary General noted that Russia informed the alliance about Vostok-2018 (East-2018) exercises before and after they were held, and also announced the alliance’s willingness to inform Russia about its forthcoming military exercises. To back up his claim that the parties are maintaining contact, Stoltenberg posted a photo online of Minister Lavrov and he shaking hands.

Shortly after the NATO Secretary General had left the reception room of the Russian delegation, President of Ukraine Petr Poroshenko showed up in the hallway leading to it. And then hurried away. Responding to Russian journalists asking him to take a couple of questions, Poroshenko remarked on the go that he doesn’t talk to Russian media, calling it “fake news.”

What could have made Poroshenko swing by Russia’s reception room? We asked Minister Lavrov, who showed up five minutes later, to provide a comment. “I’m not sure,” he said, “maybe he was looking for a restroom.”

Or, maybe he wanted to catch Jens Stoltenberg or catch up with Chairman of the European Council Donald Tusk who showed up briefly nearby. “Accession to the EU and NATO is Ukraine’s strategic goal,” Poroshenko has said repeatedly.

By the way, this commotion at the entrance to Russia’s reception room took place literally against the background of a carpet presented by Ukraine to the United Nations almost 50 years ago. The carpet has been hanging on the wall according to long-standing Soviet tradition.

As is customary, the schedule of the heads of delegations always has free slots reserved for unscheduled talks. Is it possible to compare notes with the United States? After the Putin-Trump summit in Helsinki, Sergey Lavrov said that the meeting was “smart” and “better than super.” However, there was no let up in sanctions pressure, nor in the attacks by the US political elite, in particular, US Secretary of State Mike Pompeo.

“We are trying to find every place we can where there is common ground, where we can work with the Russians,” Pompeo said at a news conference in New York. “There are many areas where Moscow is working against the United States, and we will hold them accountable.”

Sergey Lavrov commented on the likelihood of his meeting with his US colleague: “We will have a meeting if he wishes to. We never impose. In principle, we have an agreement to maintain contact.”

Meanwhile, Pompeo is busy doing other things, such as pushing back in US media on alleged secret plans in the administration to remove Donald Trump from office. The New York Times reported that Deputy Attorney General of the US Department of Justice Rod Rosenstein suggested that he and his colleagues covertly record Trump and cite the chaos in the White House as cause to remove the president from office under the 25th Amendment to the US Constitution, which deals with a president unable to perform his duties. According to Pompeo, he has been working in this administration from day one, and nobody has ever discussed invoking the 25th Amendment with him.

Perhaps dealing with the fallout from the story is what caused Donald Trump to be late for his speech to the UN General Assembly. The US President was supposed to speak second, right after the Brazilian President Michel Temer (Brazil has been the first to speak at the General Assembly since 1946, when the victorious WWII allies decided not to dominate GA sessions)

When, finally, Trump showed up, he started off with a story about how things have been in the US since he got to the White House. He made his traditional boast about how “in less than two years” he has accomplished more than his predecessors had by this same point in their terms, which was met with laughter from the audience.

“I did not expect such a reaction, but it's okay,” Trump said, slightly embarrassed, and went on discussing US economic growth, low unemployment and other good news. Did Trump see Turkish President Erdogan leave the hall as he was speaking? It’s a safe bet.

Commenting on Trump's remarks at the UN General Assembly, Foreign Ministry Spokesperson Maria Zakharova noted that he only mentioned Russia once, regarding energy cooperation with Germany.

“Trump focused on two topics in his UNGA speech, namely, protecting US sovereignty and advancing national interests as necessary and non-negotiable. Notably, this referred not just to the US, but all countries of the world,” she wrote on her Facebook page.

“Apparently, he chose not to bring up Russia if he didn’t have to. The only thing he said was that Germany should immediately reconsider and focus on other energy options, or it will remain dependent on Russia. Hearing this, the delegation of Germany started giggling,” Zakharova noted.

Trump's speech also got a response from Chair of the Federation Council Foreign Affairs Committee Konstantin Kosachev. “Good thing this time Russia didn’t find itself, along with Ebola, in an ‘axis of evil’ as was the case in past years. I would like to believe that this is a small glimpse of common sense in the way Trump sees the modern world, somewhere between endless disputes and pan-Americanism.”

Norwegian reporters came from out of nowhere and went on attack. “Why are you sending your spies to Norway?” they pounced on Sergey Lavrov behind the scenes.

On Monday, the Russian Ministry of Foreign Affairs issued a protest over Russian national Mikhail Bochkarev who was detained at the airport in Oslo “on false intelligence charges” and taken into custody.

Now at the UN headquarters, Sergey Lavrov confronted the Norwegians’ verbal barrage: “You have been brainwashed by propaganda. We want to know what happened to our citizen. Do you know he was actually invited by the Norwegian parliament? Norwegian hospitality really outdoes the competition,” the minister replied.

None too delicate for representatives of European media, to put it mildly! By comparison, Russia's UN envoy Vasily Nebenzya offering a cup of coffee to head of European diplomacy Federica Mogherini before her talks with Sergey Lavrov looked especially gentlemanly.

Football has become a real source of soft power for Russia. The meeting between Sergey Lavrov and President of Croatia Kolinda Grabar-Kitarovic, two football fans, started off on that note. Lavrov congratulated the Croatian leader on Real Madrid midfielder Luka Modric being named the best player of the year by FIFA. Modric collected the award on Monday, beating Portugal’s Cristiano Ronaldo and Egyptian player Mohamed Salah in the FIFA vote.

Grabar-Kitarovic responded by thanking the minister and said she texted Modric to congratulate him and he texted back that everything was fine and he was very happy. “He was really good this season,” Lavrov said in agreement

In an interview with International Affairs, Grabar-Kitarovic, who attended the World Cup final in Moscow, noted that the Russian President’s return visit to Croatia was under consideration. “We have not yet set exact dates. We are talking about this, we are preparing, and we hope that everything will come together,” the President of Croatia said.

CSTO HELP FOR THE UN

The first day of discussions with the heads of delegations naturally touched on the future of peacekeeping. “Some changes are definitely overdue,” Sergey Lavrov noted, adding that “overreliance on mandates to use force is not a panacea.”

According to Lavrov, Russia has no objection to reaching consensus on the adoption of the Declaration of Shared Commitments on UN Peacekeeping Operations, despite the document's flaws.

“However, we cannot agree to some of its clauses. First, it focuses on cooperation with civil society and NGOs at the expense of working with the host governments. Secondly, it tends to put secondary tasks, not typical for peacekeeping, in the centre of mandates, including human rights issues.”

Lavrov also warned against emphasising “the significance of certain regional organisations with questionable peacekeeping experience” in the document. At the same time, he pointed out that the CSTO is ready to develop contacts with the UN in the sphere of peacekeeping.

The next working day in New York conveniently opens with an informal foreign ministers’ meeting of the Collective Security Treaty Organisation.