Sexual Activity as a Mega-Weapon for the Middle East 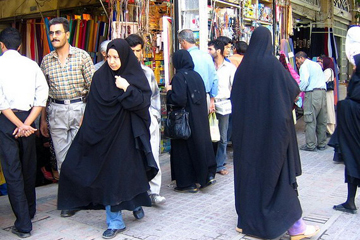 It does not take a rocket scientist to realize that, while  social media like Facebook and Twitter can be instrumental in bringing crowds of discontent to the streets, the protesters will in all cases be led by those who have built a real rather than virtual organization geared towards inducing a regime change. This could not be a secret to the US strategists who incited revolts via social media in the Middle East. Aware that politicized Islam was the best-organized force in the Arab street, they also had to know that Islamists would eventually prevail.

Does Washington expect Islamist leaders to tone down Jikhad in return for propelling them to power or because petrodollars are about to start flowing to their bank accounts? This may be what somebody in the US sincerely hopes will happen, but generally Anglo-Saxons  gained enough experience with the Middle East to understand that, unlike complacent Westerners, other nations do not act based on purely material regards and still consider important such things as pride, social justice, etc., not to mention their fanatic adherence to religion.

Given the above I suspect a hidden agenda behind Washington's Middle Eastern digital diplomacy. This hidden agenda might be linked to the seemingly apolitical theme of demography, which does have a political dimension in a special case, namely, that of Israel.

Israel's declaration of independence carries two irreconcilable theses: Israel must at the same time be a Jewish state and a democracy. The latter automatically implies that Arabs are a legitimate part of the Israeli electorate. Demographers have been warning since the 1950ies that under the arrangement Jewish statehood in Palestine has no future due to the Arabs' much higher fertility rate: once Arabs outnumber Jews in Israel, they will peacefully gain political control over the country or at least get rid of any legislation which disagrees with their interests or religious customs. For some time, the Israeli government and Zionist groups around the world entertained the idea that Jewish immigration to Israel would offset the impact of the Arabs' vigorous population dynamics, but the inflow of Jews to Israel almost dwindled after peaking in the wake of the  Soviet Union's collapse. The US and European Jewish communities, which account for 60% and 25% of the world's Jewish population, are unenthusiastic about relocating to Israel. The policy of encouraging Arab emigration from Israel produced no results either.

In 1976, the media got a hold of the secret Koenig Memorandum which showed that in a couple of years Arabs would become the majority in Israel's northern province of Galilee, the forecast that later proved accurate. In 2002, Israel's Central Bureau of Statistics released a report estimating the annual Arab population growth in the country at 3.4% and projecting that its share in the overall population of Israel would reach 21-24% by 2020 [2], but in fact Arabs accounted for 20.8% of it already by 2006 [3]. 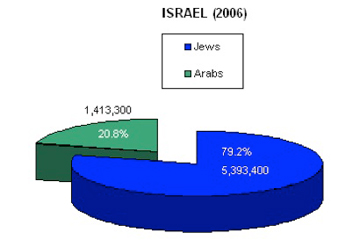 In 2003, Israel's then-finance minister and current premier Benjamin Netanyahu made the first statement to the effect that demographic trends were eroding the Jewish statehood. Speaking at an international conference, he expressed a view that Arabs' fertility rate was a delayed-action mine and an even greater threat to the Jews than the Palestinian autonomy. Netanyahu said that Israel would stop being a Jewish state and become bi-national when the Arab share of its population rises to 35-40% [1].

Considering that Arabs clearly tend to have more children than Jews and that, moreover, many of the Palestinian women marry nationals of Arab countries, thus enabling them to move into the relatively wealthy Israel, it appears that any efforts to impede the Arab population growth in Israel are doomed to failure. This may happen sooner or later, but at most by 2050 Jews in Israel will have to choose between democracy and the country's Jewish statehood the Zionists dreamed of.

To further complicate the situation, the major contribution to the growth of Israel's Jewish population comes from the deeply religious Jews who, by the middle of the XXI century, will likely make up half of the Israeli Jewish total. One likely result of the shift will be that the balance between secular and religious principles in the Israeli life will tilt in favor of the latter. The more religious part of Israel's Jewish population will never consent to a de facto abolition of its Jewish statehood, making an Arab-Jewish conflict within the country imminent.

The presence of Palestinians residing in the occupied territories – the Gaza Strip, the Golan Heights, and the West Bank — also factors into the situation. An irreversible annexation of the territories by Israel would momentarily cause the country's Jewish and Arab populations to become equal in size [4]. Chances are they already did, considering that the available 2006 data are obsolete. For Israel, granting the Palestinian Arabs the rights enjoyed by their peers having the Israeli citizenship would be tantamount to suicide. 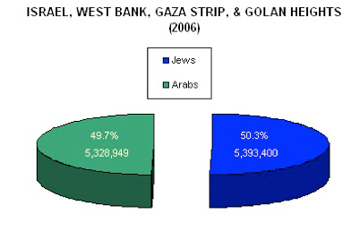 Yet, giving up control over the territories seized during the war with Arabs would be no less suicidal a step for Israel.

It takes a glimpse of the map of Israel showing the distances from the Palestinian autonomy to the main Israeli cities to understand why Jews hate to think of reverting to the 1967 borders. If a sudden attack is launched from three directions including that of the West Bank where the Palestinian state is supposed to materialize, Israel would stand no chance, as within an hour its enemy's tanks would likely reach the Mediterranean shore. Scenes of mob justice in Libya give an idea of what can happen next. The above seems to indicate that for Israel withdrawing from the occupied territories would be a reckless move, but still, their subdued but never integrated population presents a serious problem from the demographic standpoint. Though, the histogram displayed below should give a clue as to what solution is in the making. 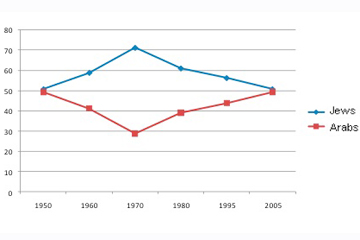 The key circumstance reflected by the graph is that  the percentage of Jews in Israel peaked and the percentage of Arabs dropped to a minimum in 1960-1970. The media resource from which the data are taken bluntly attributes the fact to the massive flight of Arabs from Israel and Palestine during the 1967 war, inviting the cynical hypothesis that the statistic offers the only plausible recipe for preserving Israel's Jewish identity. The US motivation behind slapping “democracy” on the Arab world, with Islamists prevailing in the long run, should become understandable when put in such context: Islamists will surely be sustaining the Arabs' conflict with Jews, providing Israel with a decent pretext for delivering, in accord with the international law, a preemptive strike like the 1967 one. At that distant time, Cairo demonstratively retracted UN peacekeepers from the Israeli border, and Tel Aviv concluded that Egypt was bracing for an attack. A military conflict - and a tide of Arab refugees from Israel - ensued.

It is noteworthy that, while the Arab Spring raged in Egypt and Syria, Jordan, a country neighboring Israel, neither suffered any outbreaks of unrest domestically nor came under pressure externally. The impression is that Washington left a safe corridor via which a new wave of chronically downtrodden and desperate Arabs would sweep to the east from Israel and Palestine.

Founder of the discipline of sociology Auguste Comte used to say that demography is the same as destiny. I daresay destiny is something one always can attempt to outplay – perhaps, rather than fight wars, Jews should be more active sexually? Competing with Arabs in this delicate sphere could provide Israel with an alternative solution.

I do admit that all of this can be pure speculation on my behalf – but chances are it is not.