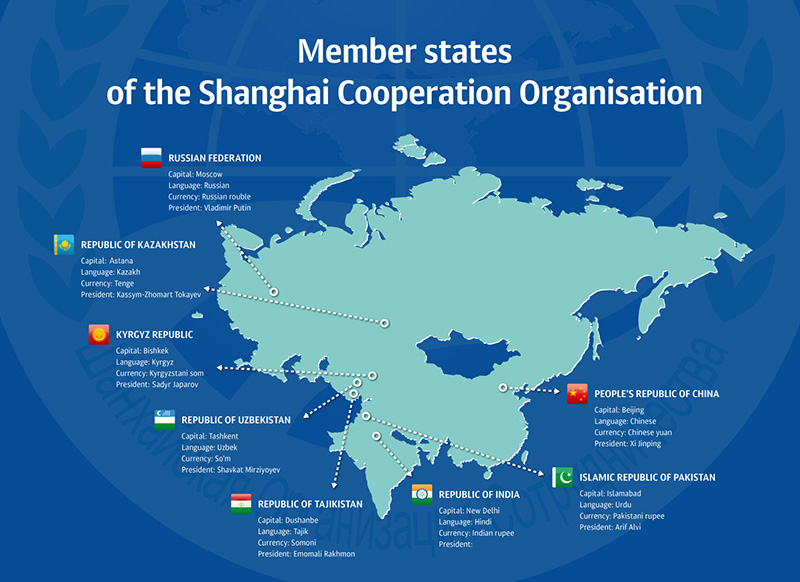 A formation of the Shanghai Cooperation Organization (SCO) was formally announced in 2001, and it established itself as an exclusionary outlier. Originally known as the ‘Shanghai Five’ when it was created in 1996, it included China, Russia, Kazakhstan, Kyrgyzstan, and Tajikistan, with Uzbekistan later joining when it evolved into the SCO in 2001.

The SCO was created partly to help coordinate a new era of peaceful relations between Moscow and Beijing and to manage their coalescing interests in Central Asian states. In addition, combating the “Three Evils” of ‘extremism’, ‘separatism’, and ‘terrorism’ were major priorities for the organization, which included data and intelligence sharing and common military drills among its member states.

Over time, the SCO began to embrace greater political and economic integration. But the organization’s most pressing vocation was facilitating a multipolar world order. Investing in an independent forum for economic, political, and military affairs outside of Western influence became a key component of Russian and Chinese attempts to reduce Western power in global affairs.

Russia and China have also developed complementary mechanisms to the SCO, which have helped decentralize its mission. Following the blacklisting of several Russian banks from the Society for Worldwide Interbank Financial Telecommunication (SWIFT) in 2014, for example, the Kremlin approved the creation of the System for Transfer of Financial Messages (SPFS) to replicate SWIFT.

These initiatives even proved attractive to states that were more aligned with the Western-led global order. India and Pakistan began SCO accession talks in 2015 and officially joined the organization in 2017.

At the 2022 summit of the SCO Heads of State Council, Uzbek President Shavkat Mirziyoyev reiterated that the SCO was not an anti-U.S. or anti-NATO alliance. But the organization’s original motive to create a multipolar world was echoed in its Samarkand Declaration and continues to conflict with Washington’s attempts to maintain the U.S.-led world order. According to the declaration, the member states “confirm their commitment to the formation of a more representative, democratic, just and multipolar world order.”

This core stratagem continues to appeal to countries around the World.

Alongside the leaders of its eight member states, the SCO invited the presidents of Belarus, Mongolia, and Iran as official observers to the recent summit. Having started its accession process in 2021, Iran signed a memorandum of understanding with the SCO to join the institution by April 2023. The presidents of Azerbaijan, Turkmenistan, and Turkey were also invited to the SCO summit as special guests, with Turkish President Recep Tayyip Erdoğan announcing that his country would seek full membership to the SCO.

Russian and Chinese influence will fall as more members join, which will also dilute consensus within the organization. But it remains a Beijing and Moscow-led initiative to manage world affairs and to demonstrate that the “international community” is not just the West.

With almost half of the world’s population and a quarter of the global GDP, the SCO is increasingly becoming a representative of the Global South.

By pooling together other IOs into an umbrella forum, the SCO can further its goal of challenging the wider Western-dominated International Organizations and prevent Washington from setting the Global Agenda, writes John P. Ruehl.