Shock and Awe in London 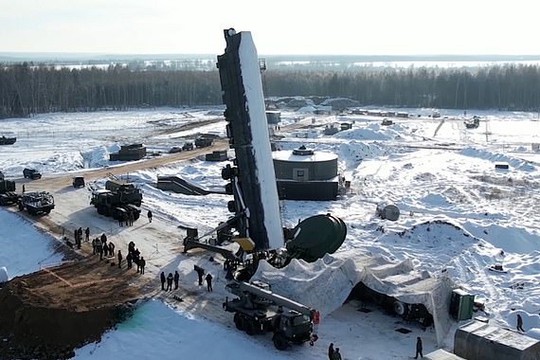 Russia renewed its nuclear threat against the West today by ostentatiously readying a Yars strategic missile for combat use at a location southwest of Moscow (pictured).

Russia issued a new nuclear threat to the West by ostentatiously readying a Yars strategic missile for combat use at a location southwest of Moscow, - informs “The Daily Mail” with a sense of fear and anxiety.

The missile is capable of striking targets in the United States and Britain, stresses the London newspaper: “President Vladimir Putin was seen in late October overseeing the launch of a similar Yars nuclear missile on a mock attack on the West amid high tension over his February 24 invasion of Ukraine and fears he could resort to a nuclear strike”.

The Yars intercontinental ballistic missile with a 7,500 mile range was installed in a silo launch pad using a special transport and loading unit. The 'complicated technological operations' took a few hours.

Division commander Col. Alexei Sokolov made clear the exercise was aimed at sending a message to the West, with both the UK and US within range. 'The importance of this operation lies in the fact that the next missile will be put on combat duty on schedule,' he said. 'The Homeland will get another nuclear missile weapon, which will make it possible to solve any tasks at the strategic level.'

Combat engineer Vadim Vyazovsky told TV Zvezda, the Russian Defence ministry's channel: 'I feel proud of Russia that my country is putting such products into service so that the Motherland can sleep well.'