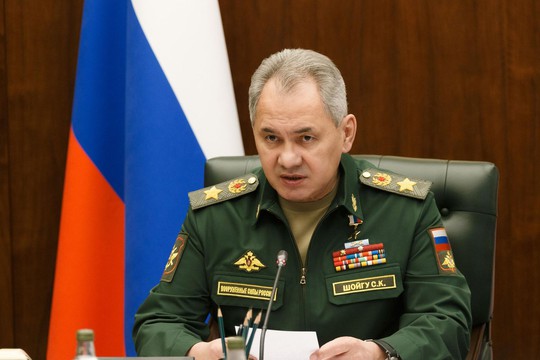 On May 20th the Defence Ministry Board Session chaired by the General of the Army Sergei Shoigu was held.

Progress on the battlefields

The Minister of Defence reported about the progress of the special military operation in Ukraine.

The Armed Forces of Ukraine (AFU), trying to delay the advance of Russian troops, are not letting local residents to get out of cities and towns and are using them as human shield.

Suffering defeat on the "ground", the Kiev regime seeks to achieve at least short-term successes in certain areas, passing them off as major ones.

On the eve of Victory Day [May 9th], the Ukrainian authorities made an adventurous attempt to seize Snake [Zmeinyi] Island. This dubious action turned out to be a complete failure. The Russian Armed Forces have eliminated 50 members of elite AFU units. In three days, 4 enemy aircraft, 10 helicopters, 30 drones and 3 boats were destroyed.

Sergei Shoigu stressed that any provocation would be severely dealt with.

The blockade of the Azovstal plant continues

Civilians held there by Ukrainian nationalists have been evacuated from the plant. 177 people were rescued, including 85 women and 47 children.

Each citizen is provided with security and qualified medical and psychological assistance.

Nationalists blocked inside the plant are actively surrendering.

The Minister noted that the Russian Armed Forces are doing all they can to prevent civilian deaths. Humanitarian corridors are operating for this purpose on a permanent basis.

More than 1,377,000 people have been evacuated to Russia from dangerous regions of the people's republics, as well as from Ukraine, since the beginning of the special military operation.

He also thanked the personnel for their professionalism, courage and heroism in accomplishing the tasks set by the Supreme Commander-in-Chief.

Turning to the agenda of the meeting, the Defence Minister was first to consider the progress of the plan of activities in the Western Military District in implementing the President's May Decrees and his instructions following the meetings in Sochi.

The situation in the Western strategic direction is characterized by growing military threats near Russia's borders.

Over the past eight years, U.S. strategic bomber flights in Europe have increased 15-fold.

American ships with guided missiles have entered the Baltic Sea on a systematic basis. This year alone, they have carried out missions near the Kaliningrad region on six separate visits to suspected cruise missile launch areas. Since 2016, the objective control system has uncovered 24 such activities.

At the same time, the USA and NATO are stepping up operational and combat training near our borders. A series of Defender of Europe exercises involving up to 40,000 servicemen from 30 bloc countries is currently underway. The main feature of the manoeuvres is the redeployment of a full division from the USA to the European continent, as well as the deployment of troops in three strategic areas: the Arctic, the West and the Southwest.

In addition, our closest neighbours like Finland and Sweden have applied to join NATO.

Enhancing the capability of the Western Military District

Under these conditions, the combat composition of the troops is being actively improved. By the end of the year, 12 military units will have been formed in the Western Military District.

The ongoing organizational measures are synchronized with the supply of modern weapons and military equipment to the troops. More than two thousand such samples are planned for this year.

Winter training period check have shown a qualitative increase of 25% in the level of training of the district's units compared to the previous year.

The intensity of practicing combat training tasks by the ships of the Baltic Fleet increased by 42%.  More than 300 exercises have been completed using various types of weapons.  The air raid of the districts's aviation has increased by 4% since the beginning of the year.

The meeting also considered a programme to equip the Aerospace Forces and the Navy with medium- and long-range unmanned aerial vehicle (UAV) systems by 2030.

Unmanned aerial vehicles are actively used by the Armed Forces for a wide range of missions.

Over the past 10 years, their flight intensity has increased sevenfold and their annual flight time has risen 23-fold.

Since 2015, unmanned aerial vehicles have been monitoring almost all of Syrian territory around the clock. Since the beginning of the Syrian operation, more than 58,000 sorties have been made, with a total flight time of more than 377,000 hours.

During the special military operation in Ukraine, UAVs conduct aerial reconnaissance and carry out selective point-blank strikes against enemy targets in dense urban areas, preventing damage to civilian infrastructure and civilian casualties. During the operation, they have already flown more than 25,000 hours.

Information obtained from UAVs is transmitted in real time to consumers. This enables troops to react quickly to changes in the situation and act as effectively as possible. The army and navy continue to receive modern systems with unmanned aerial vehicles for operational purposes.

The Minister noted that strategic UAVs are expected to be delivered in the near future. Their use will save pilots and significantly reduce the cost of reconnaissance and firing missions by reducing the consumption of ammunition and the resource of aircraft.