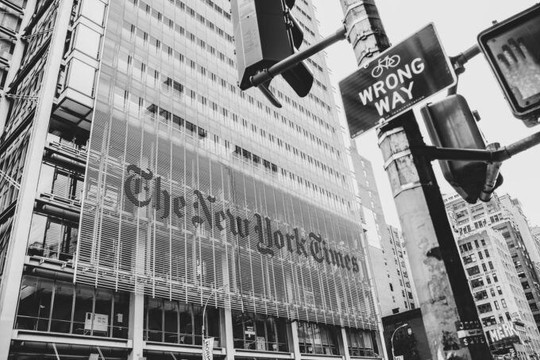 It is a sad story. Times have changed so drastically, that even the pillar of American journalism – “The New York Times” is losing its polarity and credibility in the eyes of many readers. As they say, “Sic transit Gloria mundi”.

Such a sad report published Ralph Nader at “Counterpunch” ,  consumer advocate and lawyer. He writes:

“Give the “New York Times” its due.

Its teams of reporters produce more investigations of wrongdoing by entrenched vested interests than does the entire recess-rich, Tuesday-to-Thursday U.S. Congress with all its Committees and Subcommittees.

The ‘Times’ should promptly publish some of its exposes as small books.

Their on-the-ground series on the burning Amazon Forest and their series on expanding sports gambling corruption and addiction exemplify great reporting.

However, in the last decade, the ‘Times’ has freaked out over the decline in print subscriptions, loss of advertisements and the rise of the Internet with its many aliterate users.

Though a little late, the ‘Times’ now has responded with a thriving Internet presence of about 10 million national and worldwide online subscribers, in addition to new businesses offering information and travel services. Unfortunately, their changes to the print edition – which produces important content – have exhibited an accelerating stupefaction.

As one long-time reader, about to cancel his subscription, just told me – parts of the supposedly serious sections (apart from the vast entertainment sections) come across like ‘People Magazine’(kind a boulevard press).

As for the Editorial Page, the kinds of enlightening op-eds which were submitted by outsiders over the years now are preceded by the ‘Time’s’ regular columnists – ok – but also by a stable of countless designated “contributing opinion writers.” With photos or graphics even on this page, outside freelancers and thought leaders are mostly left to drift away without so much as a courteous email acknowledgement of their receiving these op-ed submissions.

Young people – bereft of history – should realize that those two pages used to be considered the most important spaces in American journalism.

The much-read letters-to-the-editor take up just one-third of one page in this huge newspaper. That leaves out articulate letters. That in turn discourages readers from writing serious letters. Why is so little space available for letters in the ‘Times’ which has a larger readership?”