“Singing Ambassadors” build bridges between Russia and US 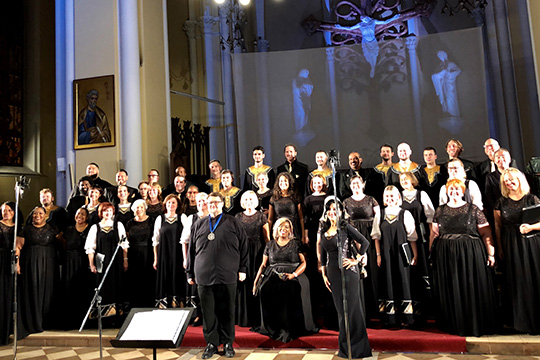 American swing, spirituals, along with music by Tchaikovsky and Rachmaninoff, were all played at the Roman Catholic Cathedral of the Immaculate Conception of the Blessed Virgin Mary. The Joanna Medawar Nachef Singers (JMN Singers) from the United States teamed up on stage with members of the Pokrov Chamber Choir to perform that unusual program in a concert organized as part of the Choral Seasons project, designed to promote cooperation between Russia and the US and professional contacts between musicians. The two choirs use folklore music to establish a deep connection between people, a mutual understanding and a friendly atmosphere among American and Russian listeners. The concert proved that relations between nations can remain good and rise above any political differences.

The JMN Singers’artistic director and conductor Joanna Medawar Nachef believes that music is a universal language.

“Folk music can build bridges of understanding between nations. Our visit here gave us a chance to become ‘Ambassadors of harmony.’ Besides, we bring together our best forms of soft “power,” Dr. Nachef concluded.

According to the Pokrov Choir’s artistic director and conductor Andrei Goryachev, music is one of the most important languages peoples of the world can use to talk to each other and, most importantly, understand each other.

“We embarked on this road to mutual understanding in October 2018, holding online rehearsals via Skype. We tried to explain to each other what our musical cultures are really all about,” Goryachev emphasized.

Joanna Medawar Nachef Singers was founded by the Beirut-born Joanna Medawar Nachef, who is recognized as the first woman conductor from the Middle East in the United States, in 2015. The Pokrov Chamber Choir was created by conductor Andrei Goryachev from an amateur youth Orthodox church choir in 1999. Presently, the choir performs mainly in Europe, earning the title of “Singing Ambassadors” in the European press. It was with participation in the Choral Seasons project in mind that a new amateur choir was set up from enthusiasts, keen on performing choral music from other countries.

The "Choral Seasons" project’s goal is to establish direct cultural exchanges between Russian and foreign choirs. Thanks to this project, choirs from   Austria, Germany, Hong Kong, Italy, Canada, Serbia, the United States, France, Montenegro and Switzerland have performed in Russia since 2008.

After the concert, International Affairs met with the Pokrov Choir’s artistic director and conductor Andrei Goryachev.

International Affairs: Andrei Vladimirovich, could you share with us your emotions and impressions from the concert?

Andrei Goryachev: I’m lost for words, really! Today we not only managed to bring the two countries’ singers together, but also literally got into the very heart and soul of each other’s cultural heritage.

Previously it was hard for us to imagine the impact the abolition of slavery had on the musical culture of the United States, since the similar abolition of serfdom in Russia did not have such a strong impact on this country’s musical culture. In America, jazz music is all weaned on slave songs, and this is something they remember very well as it is part and parcel of their culture.

What I would also like to emphasize here is that the American musicians managed to learn Russian folk songs, singing them with a good pronunciation and style. Well done, guys!

International Affairs: What is the main goal of the Choral Seasons project?

Andrei Goryachev: The Choral Seasons’ primary objective is to build up   mutual understanding between the peoples of the whole world through music. Getting back home, artists tell their fellow countrymen that life in Russia is different from what they normally see on television. This is extremely important, not only in cultural sense, but also as an important part of Russia's cultural diplomacy. The US State Department has invested some money into this project (allocating a grant to finance the US choir’s trip to Russia and for the implementation of public diplomacy), and I would like to see our country doing the same thing.

International Affairs: Today you were awarded a medal. Would you say a few words about it?

Andrei Goryachev: I got this medal from a Los Angeles-based foundation, which supports such projects and awards medals for contributions to cultural diplomacy, for peace and harmony.

International Affairs: What are your future plans for the Choral Seasons project?

Andrei Goryachev: On August 10, we will team up at the Catholic Cathedral of the Immaculate Conception of the Blessed Virgin Mary, with the Montreal Classical Choir from Canada, who are currently on a tour of Russia, the first in their 30-year history, to perform a set of unique pieces.

One of the most beautiful requiems ever written was penned by the Russian composer Osip Kozlovsky, the author of the first unofficial anthem, “Let the Thunder of Victory Rumble!” The Canadian choir prepared Kozlovsky’s “Requiem” expressly for this concert, which they will perform with the Pokrov Choir, the choir of the Choral Seasons project and with the participation of Professor Alexei Parshin (organ). The “Requiem” will also be performed in Pskov with the Pskov Philharmonic Orchestra, and in Yaroslavl - to the accompaniment of the Yaroslavl Philharmonic Orchestra and the Yaroslavl Philharmonic Choir, which helps us implement our projects.