Skeptical Remarks on the Eve of the Hannover Russia-Germany Summit 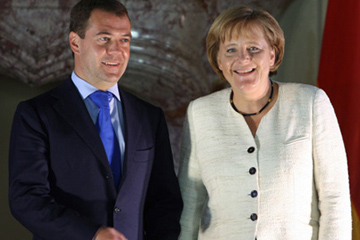 There is consensus across the expert community that a new phase of the settlement in Transnistria was energized by the June 4-5, 2010 informal meeting between Russian President D. Medvedev and German Chancellor A. Merkel in the Meseberg Castle near Berlin. The key result produced by the talks was Russia's consent to a bigger EU role in the resolution of the conflict over Transnistria or – in absolutely precise terms – to an upgrade of the EU status in the process from an observer to an active player. On its part, Moscow obviously expected to be rewarded by Germany's and the whole European Union's greater openness to Russian initiatives in the sphere of European security.

A year after the Meseberg talks, the results appear nonexistent. President Medvedev's European security proposals met with little understanding, and the Lavrov-Ashton Committee, a Russia-EU foreign minister-level security forum promised in Meseberg, never became fully functional. Moreover the rift between Russia and the EU over the number one European security issue - the US plan to site missile defense infrastructures in Europe – has widened. Therefore, the framework in which a compromise on the Transnistrian problem could be sought collapsed, Moscow by no means being the party responsible for the problem.

Germany and its EU peers failed to parlay their initial enthusiasm for the Transnistrian settlement into usable initiatives: their approach remains limited to calls for the withdrawal of the Russian forces from what they regard as Moldova's territory and for an overhaul of the peacekeeping mission in the region, preferably with the EU taking charge. In practice, the set of ideas boils down to anti-Russian and anti-Transnistrian invectives, and is perceived as such both in Moldova and in Transnistria.

On top of the above international context, the current situation inside the conflict region leaves practically no hope that the settlement process can be put back on track. In Moldova, the victory in the November 28, 2010 elections of a second edition of the Alliance for European Integration which took to assembling premier Vlad Filat's new government failed to lift the country out of its deep political crisis. Up to date, the Alliance has been unable to get a new president elected, and, in line with the Moldovan constitution, the mission still rests with president of parliament Marian Lupu. In the meantime, cracks are appearing in the ruling coalition due to the frictions between V. Filat's Liberal Democratic Party and its smaller companions.

Due to this chaotic condition, at the moment Moldova cannot act as a credible partner in the Transnistrian settlement. To make things even worse, Moldova's ruling pro-Western coalition and left opposition alike stay utterly opposed to admitting Transnistria to the talks as an equal partner, which means that any efforts potentially contributed to the settlement by external players a priori stand no chance.

Moldovan premier V. Filat, an undisputed champion in the craft of self-advertising, may be permanently boasting about the coincidence of interests over Transnistria between Moldova and the EU - or even about A. Merkel's full support for Chisinau's cause - but the rhetoric fireworks are likely to be meant for domestic consumption. In and outside of Moldova, Mr. Filat's tendency to build a reputation on the myth about his excellent connections in the West's high places is an open secret.

Before and especially after Meseberg, the Transnistrian settlement agenda revolved essentially around reviving the stalled talks in the 5+2 format involving Moldova, Transnistria, Russia, Ukraine, and OSCE plus the EU and the US as observers. Notably, as of today an upgrade of the EU role in the negotiating process and a relative OSCE slide are accomplished facts, but the consultations held on June 21, 2011 in Moscow ended in stalemate, prompting the Transnistrian leadership to declare that the resumption of the 5+2 talks would be untimely. Now all that can be realistically expected is not a reopening of the talks but a reopening of the consultations on the feasibility of such talks. In other words, the probability of achieving anything serious in the Transnistrian settlement finally shrank to the minimum.

The Moldovan administration and its Western patrons are trying to shift the blame for the collapse of the talks entirely onto the Transnistrian leadership, thus indirectly exerting pressure on Russia which they suspect of unannouncedly encouraging Transnistria's inflexibility. Rumors also proliferate that  Transnistria's antipathy to compromise reflects the individual position of its incumbent leader I.N. Smirnov and that the victory of his rival – the less ambitious Transnistrian Supreme Soviet speaker A.V. Kaminski – in the December, 2011 presidential race would open up an opportunity to reanimate the settlement process.

The vision, though, is unrelated to reality. First, Russia is in no way indebted to the West in connection with the issue of Transnistria, in part because the EU, the US, and NATO did not do their part of the job to make it possible for Russia and the West to implement mutually acceptable European security initiatives. Secondly, Transnistria's independence and sovereign statehood stem from an elaborate consensus to which all of its society and political spectrum undividedly subscribe.

Over the couple of decades of Transnistria's de facto divorce with Moldova, independence became tightly interwoven with the identity and sense of dignity of the vast majority of Transnistrians. Concepts like Moldova's asymmetrical federalism suggested by the 2003 Kozak memorandum lacked viability even at the time the document saw the light of day, and are clearly out of place in today's Transnistria, after the economic blockade and the 2006 independence referendum.

The situation became a quagmire, and the external players obviously have little to offer. The Transnistrian settlement is sure to occupy a top line on the agenda of the Russia-Germany summit which is due to open in Hannover on July 18-19, 2001, but on the eve of the event prospects for an agreement that would breathe new life into the negotiating process are dim. An oriental proverb reads: ten people can push a horse into water, but even a hundred can't make it drink. The wisdom applies neatly to the current state of the Transnistrian problem. Influential players can and will go on urging parties to the conflict to return to the negotiating table but they will not succeed in making either the Moldovan elites or the people of Transnistria renege on their fundamental and absolutely incompatible positions.