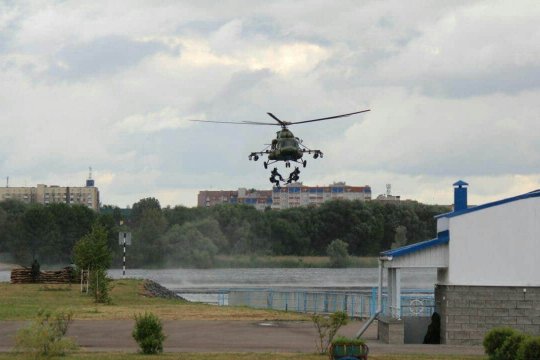 Paratroopers from Serbia will be hosts to elite counterparts from Russia and Belarus for this year`s Slavic Military Brotherhood exercise, which will last over 13 days between June 14 and 27.

On June 14 the multinational tactical exercise with live firing "Slavic Brotherhood 2019" started lining up members of the armed forces of the participating countries, in the "Rastko Nemanjić" barracks in Pancevo, northern Serbia.

At the exercise carried out on the topic "Multinational forces in anti-terrorist operation" there are more than 750 members from Serbian, Russian and Bealrusian Army. The Commander of the Special Brigade of the Serbian Armed Forces, Brigadier General Miroslav Talijan, greeted participants of the exercise on behalf of the Chief of General Staff of the Serbian Army, General Milan Mojsilovic.

“This exercise is performed in the area where members of the Soviet Red Army hand in hand with the members of the Yugoslav Army led a decisive struggle in October 1944 to liberate Banat, eastern and entire Serbia from fascists”, stated Serbian General Talijan and added that the exercise "Slavic Brotherhood 2019" is conducted with the aim of training commands and units for the execution of missions in special forces operations.(1)

Russian Colonel Viktor Babikov pointed out that members of the army of the three countries will jointly conduct maneuvers and combat operations using the latest resources that these armies have in their arms.(2)

Cooperation between the Armed Forces of the Russian Federation and the Serbian Armed Forces began with the implementation of the exercise "Srem 2014", which was realized at the Nikinci field in Serbia.

During the last meeting of the President of Russia Vladimir Putin and Serbian President Aleksandar Vucic, which occurred in late May on the margins of the "Belt and Road" Forum in Beijing, in a joint analysis of the relations between Serbia and Russia, one of the topics of the meeting of the two presidents was military cooperation.

In a statement for the media, Serbian President Aleksandar Vucic pointed out that in the previous period payments of about 619 million euros were agreed for various types of weapons from Russia. On this occasion, he added that Serbia will pay more than 60 percent of the sum by the end of the year, or about 360 million.

However, Serbia as a neutral state purchases military equipment from the West also. The president of Serbia announced in mid-February this year that the H145 and H215 helicopters would cost a total of 175 million euros.

What is particularly interesting is the comparison of Serbia's military cooperation with Russia and NATO. In this field, NATO is absolutely dominant. Serbian Army cooperates far more with NATO that it does with Russia. Since 2006, when Serbia joined  the NATO Partnership for Peace program, Serbia has participated in over 150 military exercises with NATO member states. The number of joint exercises with Russia was ten times smaller.

Last year in Serbia was held the largest NATO civilian exercise in history of the alliance. International Field Exercise “Serbia 2018” was organized by the Serbian Ministry of Internal Affairs and the NATO EURO-Atlantic Disaster Response Coordination Centre (EADRCC).(3)