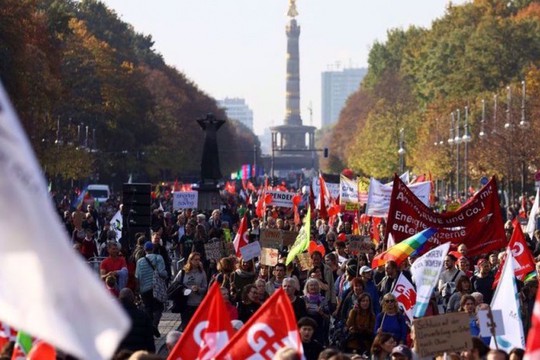 Citizens across much of the continent are marching in the streets, protesting against inflation, the Western proxy war in Ukraine, as well as the Washington-led sanctions blitz, - writes Connor Freeman, an assistant editor and a writer at the ‘Libertarian Institute’, primarily covering foreign policy.

As inflation and energy prices continue skyrocketing in Europe, people across the continent are protesting against the war in Ukraine and the anti-Russian sanctions, which have raised living costs to intolerable levels.

This is making politicians nervous, as winter approaches. “The resignation of Prime Minister Liz Truss sent perhaps the clearest signal yet that political peril awaits those who fail to address inflation and the erosion of living standards, no matter the cause,” according to “The New York Times”. Studies are showing significant decreases in support for Kiev and the Western proxy war.

The European Union’s annual inflation rate is currently reaching heights not seen in decades – 10.9%, compared to 3.6% this time last year. This is largely driven by the Washington-led sanctions blitz, which has cut the bloc off from the cheap Russian gas upon which it has long relied.

As winter approaches, people are making their voices heard. The demonstrations cut across the political spectrum, with the left, right, union members, and poor people all expressing severe discontent. Strikes and protests over the rising cost of living proliferate, ushering in a period of social and labor unrest not seen since at least the 1970s.

In Germany, Europe’s economic powerhouse, tens of thousands of people are protesting against inflation and support for the proxy war in Ukraine. This is occurring particularly in the eastern states which are “among the country’s poorest, and most conservative.” However, the left is organizing similar demonstrations which “mirror the complaints of the right.” For instance, roughly 1,300 protesters gathered in downtown Leipzig with signs that said “Our country first.”

In France, the gross domestic product will shrink by an estimated $73 billion and there will be a concurrent 1.4 percent drop in purchasing power next year, according to a recent study cited in the report, “with the effect felt largely in poorer households.”

Another study cited in the report shows only a third of the French are willing to bear the brunt of the economic consequences associated with these policies. “France’s main unions led large demonstrations in Paris, with tens of thousands marching for wage increases, and a survey by the polling firm IFOP found that support for Ukraine was down about 5 percentage points since May,” - “The New York Times” notes.