Something for the children to believe in... 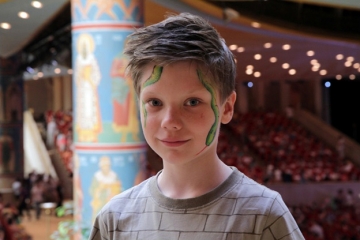 On May 26th, talents from orphanages in the capital and the regions of the capital, performed together with Russian pop stars, as part of the "Good Moscow" campaign, which took place in the Hall of the Cathedral of Christ the Savior, where the "I believe!" event was held.

The concert program consisted of:

There were competitions for children, and educational workshops for all the participants at the concert.

The event was presented by popular showman Alexander Oleshko.

Support for the event was provided by volunteers from the Mosvolonter youth center.

The concert was organized by the Centre for Development and the "NAMES production" center for children and youth, with the support of the Moscow Department of Culture, the Russian Orthodox Church and the Mosvolonter Resource Center. This year, the general partner for the concert was the “Desheli” cosmetic company.

Speaking about the event and the occasion, the emotional graduate from a "Factory of Stars" singer Prochor Shalapin said: "Recently I cry when I see children, probably because I already want to become a dad myself. Children touch something bright in us, bringing us closer to God. I try to participate in these concerts as often as possible, but am constantly confronted with poor organization. Here today, I see how everything has been very properly organized: everything is about the kids. "

For example, speaking about this event, theatre and movie actress Nonna Grishaeva said: "Today during backstage rehearsals and when waiting for my turn to perform, I saw so many happy children's faces. So we should have as many such events as possible. Not just once a year, on the eve of Children's Day, but more often. Because these children, especially those from children's homes, are deprived of the attention they need, and they need to feel that they are important to somebody, and we can prove it to them. I try to never refuse requests and appeals to participate. But due to my schedule, unfortunately, it does not always work out, but I try never to refuse.” The actress told how she helps in various charity events: "Old people, too, can be as helpless as the children. I myself have worked with the Yevgeny and Maria Mironov fund, to raise money for the aged and older artists that are often forgotten about." In his turn, Alexander Oleshko, the actor and television presenter, and a favorite of the children's audience admitted that he always works with children only on a charitable basis.

Committed participant Natalya Andreyevna, the host from KVN’s “Comedy woman”, also confessed her love for the children: "I have no children of my own yet, but I have nephews, and I am really enjoying being here. To be honest, I don’t get invited very often to such events. Such events are quite rare and that makes them priceless. I have great respect for the people who organize these celebrations every year."

Singer Vladimir Levkin, famous for his boy band group "Na-Na ", talked about his work in this field: "I myself participate in such events because I love my country. Also, I believe that there should be no homeless children: children must have parents, even if they are orphans. So I try to do my best so that children and adults who want children, and want to take them into their family, can find each other."

Official Michael Jackson impersonator in Russia, Pavel Talalaev shared this with us: "Michael Jackson introduced the trend of children's charity to the world of show business. He organized not only concerts, but also whole world tours and spent huge sums of money on the needs of sick or needy children. During his tours he visited children's hospitals and orphanage, including in Moscow, or, for example, in Bucharest ... I continue Michael’s work in Russia and carry it to the masses."

Vladimir Filippov, Deputy Head of the Department of Culture of Moscow spoke about the opportunities offered to all children by the Moscow government: “Every second Saturday of the month the young volunteers from "Young Capital" visit orphanages in Moscow and the surrounding regions. They deal with children who are raised without parents. This communication has influenced the university choices of many foster children, as the children know that they have older mentors. There is an awesome atmosphere here today. In our city, where it seems that everybody is constantly in a hurry to earn money, and they want to achieve success as quickly as possible, now more and more people are thinking about comfort and security, especially for children. Our event today is called, "I believe!" So, I believe that every child in Moscow has great opportunities for a comfortable and secure life and a happy childhood, and to achieve their dreams! For example, each orphan who leaves a Moscow orphanage and does not have their own place to live is given an apartment in the capital. And it's not just bare walls, but a fully fitted place to live, with all the domestic standards for a decent home. Each orphan or child in Moscow is entitled to an annual holiday at a children's camp, paid for from the city budget, as well as every the opportunity to learn and develop creatively. That is what we in the Moscow Government are doing.”

For the younger participants, a real celebration was arranged, and it was particularly pleasant that it took place just before the start of the school summer holidays.

Note: 2014 is a jubilee year for the concert. The "NAMES Production Center" held its first charity concert five years ago.