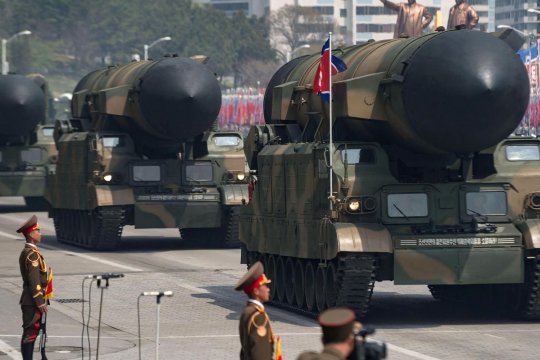 On December 20, South Korea’s presidential Blue House unveiled a new national security strategy - a “top-level” national security and defense policy document, which also pertains to President Moon Jae-in’s policy of reuniting with the North. Such documents are normally drawn up once every five years, but the current version appeared a year earlier due to the “significant changes” in the situation on the Korean Peninsula.

What is important here, however, is just to what extent Seoul’s new strategy reflects the undoubtedly positive changes that have recently been happening in relations between the two countries. The new strategy prioritizes a peaceful resolution of the North Korean nuclear problem, the establishment of a lasting peace on the divided peninsula, promotion of peace and prosperity in Northeast Asia, strengthening South Korea’s defense capability through "a responsible defense policy,” and efforts to pursue “balanced diplomacy of cooperation."

In the preamble to the document, President Moon says that from now on South Korea will be pursuing a more active policy in the field of "security that ensures peace.” This is a clear sign of Seoul’s desire to solidify its role in the process of inter-Korean dialogue and the US-North Korean denuclearization talks.

But, as we all know well, the devil is in the details. Even though a full version of the strategy paper has not yet been released to the public, it contains nuances that are new and, therefore, merit our attention. For one, it says that while the issue of a formal end to the war on the Korean Peninsula will be resolved during the early stages of North Korea’s nuclear disarmament, Seoul will sign a peace treaty only after the process of North Korean denuclearization has been completed.

Well, this clearly reflects the tough negotiating position of Washington, while Pyongyang insists on a phased denuclearization based on reciprocal and proportionate concessions and, above all, on security guarantees.

What Pyongyang is holding out for is a peace treaty. Seoul, for its part, will apparently be ready to propose signing a Declaration on ending the war during the early stages of negotiations, and promise Pyongyang a full-fledged peace treaty only after North Korea has fully denuclearized.

Simultaneously with release of the new national security strategy, the South Korean Foreign Ministry announced a reform of its organizational structure and the planned creation of a separate department to deal exclusively with relations with China. Until now, the US was the only country to enjoy the privilege of having such a “personal” department there. This is a clear sign of China’s growing importance to South Korea.

According to the newspaper Korea Times citing Foreign Ministry sources in Seoul, the new “Chinese” department will oversee the entire range of issues pertaining to relations with Beijing - from military-political to trade.

During recent informal meetings with Russian experts, South Korean Foreign Ministry officials said that the creation of a “Russian department” at the Ministry was almost a done deal now. This never happened though, and it is most likely that overseeing relations with Russia will be a newly created department for Eurasian countries, to also include the Mongolia-affairs desk that was previously part of the North Asia department.

The Japan-affairs department will, likewise, be reassigned to another division that will also include the India and Australia departments. This apparently means that Seoul wants to give priority attention to the “Indo-Pacific Partnership” being put together by the United States that the abovementioned countries are part of.

Getting back to President Moon Jae-in’s national security strategy, Seoul is apparently request additional exemptions from Washington’s sanctions against North Korea in a bid to build up economic cooperation with Pyongyang, including in the implementation of infrastructure projects (just a day before Seoul unveiled its new national security strategy, the UN Security Council authorized the reunification of the trans-Korean railway). Seoul has also made clear its intention to send $8 million worth of humanitarian assistance, above all food, to North Korea.

The prospects of expanding economic cooperation between North and South Koreas ahead of the second US-North Korean summit were high on the agenda of a recent meeting between South Korea’s national security adviser, Chung Eui-yong, and the US Special Envoy for North Korea, Stephen Bigan.

Seoul’s new national security strategy reflects the growing role it has been playing in the efforts to resolve the situation around the Korean Peninsula and its desire to make sure that this process is irreversible. To make this happen, South Korea needs to walk a delicate line of “balancing” the interests of Washington and Beijing.

Therefore, Russia’s bigger presence in the region will be conducive to normalizing the situation and will strengthen this country’s positions on the Korean Peninsula.