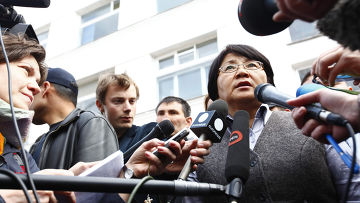 Unrest has lingered in the southern part of Kyrgyzstan since the April 7 coup. Recently, local Kyrgyz and Uzbek populations clashed in the Jalal-Abad province, the displaced Kyrgyz President K. Bakiev being widely suspected of organizing the riots.

Early on May 19, up to 3,000 people rallied at the city`s horse racetrack in Jalal-Abad. The protesters expressed discontent with regional governor Bektur Asanov and demanded the arrest of local Uzbek minority leader Kadyrzhan Batyrov, accusing him of stirring up ethnic tensions in the region. Later the crowd marched towards the downtown Jalal-Abad.

On the way the protesters were stopped by police and security special forces. The people were outraged by the torching in the village of Teit of the Bakiev family residence, the homes of his neighbors, and especially the home of Bakiev`s uncle, a 90-year old World War II veteran who had been targeted solely for being a relative of the toppled president. The protesters believed that the homes were burned down on the order of K. Batyrov, an ethnic Uzbek, who rejected any connection to the incidents.

Having failed to reach the downtown Jalal-Abad and to talk to the governor, the crowd headed for the local university which serves as the Uzbek community center. On the way, the number of protesters grew to 5,000-7,000. Shooting was heard in the proximity of the university by noon as the crowd attempted to invade the campus and threw stones at the security forces. The police was forced to fire shots in the air as a warning, and later exchanged fire with the protesters some of whom were evidently armed with shotguns.

By mid-day of May 19, the protesters seized K. Batyrov`s office but were promptly expelled from it by police, which used tear gas against them. It became known by night the same day that two protesters had been killed and 74 people – injured. The interim government`s envoy and defense minister Ismail Isakov opened negotiations with both sides of the conflict and – with the assistance of local elders – managed to convince most of the protesters to leave, while the security forces dispersed those who refused to obey.

Next day, the Uzbek community circulated a statement blaming both the supporters of Bakiev and the security forces for the events of May 19. The security forces were criticized for limiting their efforts to the protection of the campus perimeter instead of preventing the mob`s march towards the university quarters, and for using force against the Uzbeks who tried to drive the attackers out of the campus. The killing of two Uzbeks in Suzak was described as a provocation aimed at triggering an Uzbek attack on the local police station. The Uzbek community holds that the riots were organized by former President`s brother Akhmat who, under the previous regime, acted as the shadow governor of Jalal-Abad and targeted Uzbeks for their supporting the interim government.

Tensions in Jalal-Abad prompted the interim government to resort to urgent measures. State of emergency was declared and a 20:00-6:00 curfew was imposed in Jalal-Abad and its vicinities on May 19. Police minister Bakyt Alymbekov, appointed as the commandant of Jalal-Abad and the Suzak district, and defense minister Ismail Isakov were instructed to do everything necessary to put an end to the riots. The interim government also issued a decree making interim leader Roza Otunbaeva acting President of Kyrgyzstan until December 31, 2011. She is to serve as both the premier and the president of the republic according to the 2007 constitution until elections are held, and then will act as prescribed by a new constitution which will be adopted via a referendum. As a requirement for her appointment to the post, which awaits confirmation in a referendum next June, she must terminate her membership in any political parties and pledge not to run in the 2011 presidential elections.

If the interim government fails to neutralize the attempts to ignite ethnic strife in the south of Kyrgyzstan, the tensions are likely to evolve into a conflict similar in character to a civil war. Hundreds of people were killed during the clashes between the Kyrgyz and Uzbek populations in the Osh province in 1990. In case a new conflict erupts, Uzbekistan - and, possibly Tajikistan, the republic with the Vorukh ethnic enclave in the Batken province - would inevitably be drawn into it, and thus the escalation in the Jalal-Abad district would breed broader hostilities between three of the five Central Asian republics and a serious threat to the region`s overall stability.